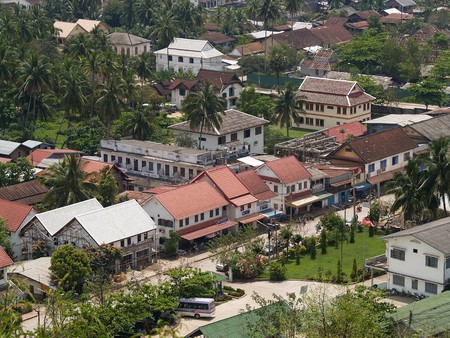 The picturesque town of Luang Prabang in northern Laos is composed of 58 small villages and only 56,000 residents, built on a peninsula formed by the Mekong and Nam Khan Rivers. With an ancient charm left relatively untouched by outside influence, it’s easy to lose yourself walking or cycling through these five beautiful neighbourhoods in Luang Prabang.

Located at the very tip of the peninsula, Wat Xiengthong is the hipster heart of Luang Prabang. The neighbourhood has a park perfect for watching the Mekong swirl with the Nam Khan. A cafe offers al fresco dining options and a bamboo bridge is constructed during dry season if you’d like to walk across the Nam Khan like a local. Wat Xiengthong is one of the most opulent temples in Laos and is not to be missed. Grab a coffee and pastry at Le Banneton. If you’re feeling splurgy, treat yourself to a spa treatment or massage at Burasari Heritage. 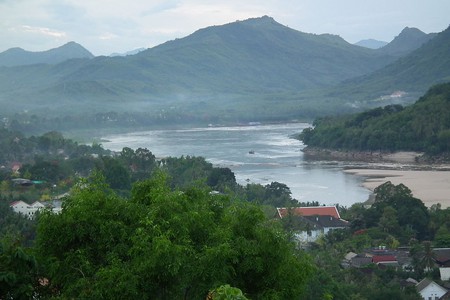 The center of the peninsula is home to Wat Sene. Several cooking schools, including Bamboo Tree and Tamarind have taken up residence on the Nam Khan River side of this neighborhood. Come in for a scrumptious authentic Lao meal in the restaurant or sign up for a class to make your own feast. On the Mekong River side of Wat Sene check out Saffron for the best coffee and workspace in town. Among the seemingly endless wooden guesthouses and restaurants, grab a cocktail at the exclusive Icon Klub, which is run solo by a Hungarian mixologist. Beyond seeing the traditional architecture, you can hear traditional Lao stories told in English at the Garavak Storytelling Theater, which has an hour-long show every night. 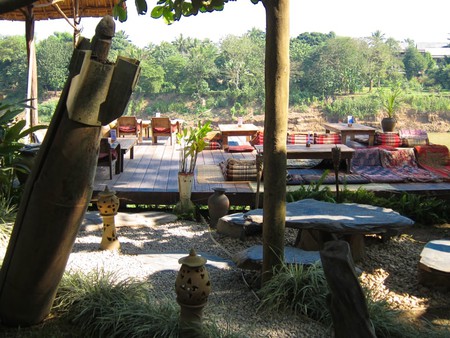 Wat Mai is adjacent to the Royal Palace and museum. This neighbourhood is the tourist center of Luang Prabang. Check out the temple, gardens, royal car collection and learn a bit about the history of the former royal capital. If you’re up at dawn you can witness Tak Bat when the buddhist monks walk through the streets collecting alms from the faithful. If crowds aren’t your thing, climbing the steps to Mount Phousi at dawn offers quiet, stunning views of the city. It gets crowded at sunset. Don’t miss the night market, one of the most impressive in Laos for street food and souvenirs every evening on Sisavangvong Road. The street shuts down to cars as the vendors set up to sell their wares. 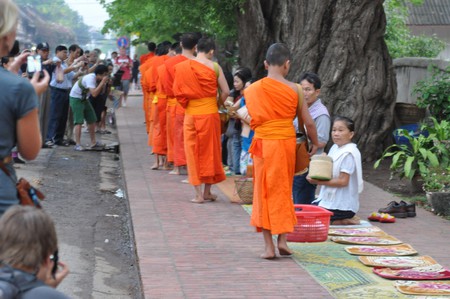 The neighbourhood around Wat Aham and Wat Visounnarath borders the Nam Khan River and wraps around the southern side of Mount Phousi. Here, expats and tourists mingle for cultural events and shoping. Check out a morning yoga class at Utopia’s patio on the Nam Khan and come back at night for a drink. Wander around for gifts and textiles at the many shops such as Ma Té Sai, and support local artisans. Get a no-frills massage at unbeatable prices at the Lao Red Cross. Free indie movies play daily at 7 p.m. at L’etranger Books and Tea, which also has a full menu. Halfway up the mountain lies the Traditional Arts and Ethnology Centre which features displays on Laos’ minority ethnic groups and their dress, traditions and way of life. 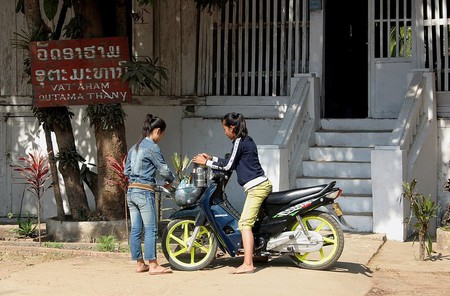 Wat Manorom itself is surrounded by luxury hotels – Sofitel, Le Sen and Satri House. This high-end neighbourhood is worth a walk through even if you’re not staying at one of these places. Checking out the gardens or a visit to the bars or restaurants on-site will make you feel fancy. Visit the UXO Laos visitor center to learn more about the war and the efforts to remove bombs that still litter the countryside. If you get a hankering for Mexican food, Amigos Mexican restaurant has you covered. Stop for dessert at U-Like Ice Cream and Bakery. 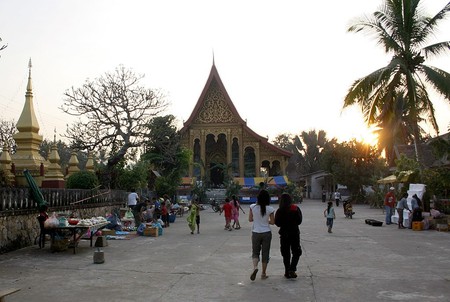