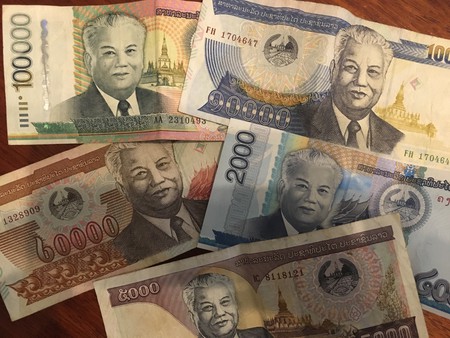 Laos has a cash economy. Only the fanciest of establishments, most of which are foreign-run, take plastic. But while paying in Laos you have your choice between US Dollars, Thai Bhat and the colorful, if often confusing, Lao Kip ₭.

The Lao Kip ກີບ has had several iterations starting in 1945-6 when the government issued the first Free Lao Kip notes. These were quickly replaced when the French introduced the piastre de commerce, the currency used in all of French colonial Indochina. The piastre de commerce was replaced by the Royal Kip in 1954 at the conclusion of the first Indochina War where Laos declared its independence from France. After the communist takeover in 1975, the Pathet Lao Kip replaced the Royal Kip at an exchange rate of 1 to 20. These notes were printed in China in denominations of 1, 10, 20, 50, 100, 200 and 500 Kip. 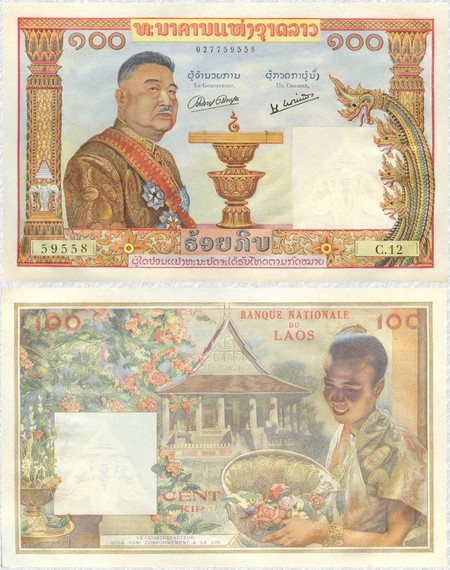 Many of Laos’ rural poor operate without cash. They instead store any wealth they have in land, livestock and sometimes gold. A combination of subsistence farming, foraging and barter stands in for monetary exchange.

Currently there are no Kip coins in circulation, but at various times Lao currency did include them. The Royal Kip currency had 10, 20 and 50 cent coins. In 1980, coins were brought back into circulation in the Lao PDR Kip with denominations of 10, 20 and 50 cents. After the fall of the Soviet Union rampant inflation coupled with economic decline led to coins being phased out of currency.

Lao Kip currently comes in denominations of ₭500, ₭1,000, ₭2,000, ₭10,000, ₭20,000, ₭50,000 and ₭100,000. In 2012, the Bank of Laos started issuing the ₭100,000 banknotes (worth roughly $12 USD) to encourage the use of Kip for large purchases over the more widely used and less cumbersome US Dollar and Thai Baht. Lao Kip is a non-convertible currency so if you take it out of the country, you can’t exchange it for other currencies. Be mindful of this when you’re withdrawing from ATMs so you don’t get stuck with poor exchange rates for buying back Kip upon leaving Laos.

The 500 kip note exists, however they are both rare and practically worthless at an equivalent to six cents USD. Both Lao numbers and Arabic numbers are printed on all notes, older notes have one type of number on the front, the other on the back, and newer notes have both types of numbers on both sides.

During a Baci Ceremony, which is an animist tradition conducted at major holidays and life events to bring good luck and connect the pieces of the soul together, it’s common for guests to tie rolled up bank notes on the person of honor’s wrists with white cotton string. It’s equally common to see golden or silver trees inside Buddhist temples with bank notes clipped to them by the faithful as offerings to make merit . 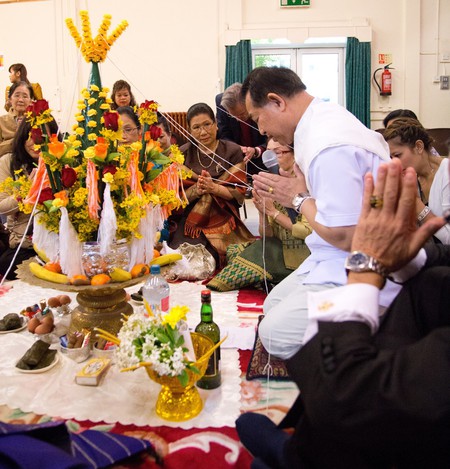 Wi-Fi is available in many places but by no means every place in Laos. Do yourself a favor and get a SIM card then use a 100,000 kip bill ($12 USD) to buy a month’s worth of data. While you won’t be able to go wild and stream video, it’ll be enough to text and navigate on a map app.

50,000 kip ($6 USD) will get you a basic guest house room for a night with a bed and private bathroom or a night in a shared dorm. Prices are a bit higher in more touristy places such as Vientiane and Luang Prabang, but get away from downtown and you’ll find this is the standard rate.

10,000 kip ($1.25 USD) is the standard price for a big bottle of Beer Lao, though prices can be more in areas that cater to foreigners. It’ll also grant you entry into most temples or museums that charge visitors a fee.

5,000 kip will buy you a pack of Lao cigarettes, but instead of filling your lungs with smoke, why not fill your belly with bananas? A bunch costs 5,000 kip.

1,000 kip isn’t much money and won’t go far. Two snacks that cost 1,000 are fried dough balls, and nom som. The former is usually sold on the street and covered in sesame seeds or filled with pandan. Nom som is or frozen sour milk dessert (think of less sweet frozen yogurt) that comes rubber banded in a small plastic bag at many convenient stores and service stations. Try the coffee flavor!

ATMs are now widely available in bigger towns. However small shops, restaurants and street stalls may have a hard time breaking “big money” so having 5,000, 10,000 and 20,000 notes comes in handy when buying from these vendors.

Lao people are incredibly honest. The 2,000 and 10,000 note look an awful lot alike. So do the 5,000 and 50,000 note. With all those zeros it can be confusing to count out cash. Merchants, armed with big calculators, will gladly show you the price and help you count your money.

Tipping in Laos is not expected, nor customary, however taking small bills (such as 1,000 and 2,000 notes) when you’re given change can be considered rude, so take the larger bills and leave the smaller denominations on the table.