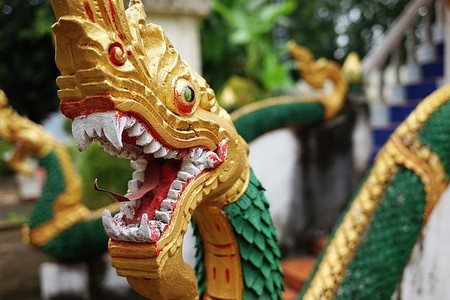 Laos’ biggest city is Vientiane, but make no mistake, this sleepy capital is more liveable and navigable than other Southeast Asian cities. Beautiful French-influenced architecture, Buddhist temples galore and fabulous natural beauty make Vientiane a must-see stop on any tour of the Lao People’s Democratic Republic.

Resembling Paris’ Arc de Triomphe, Patuxai or Victory Gate was erected on Lang Xang Avenue opposite the presidential palace. Surrounded by a park, construction finished in 1968 and now visitors can pay a nominal entry fee and climb to the top for a first rate view of Vientiane. 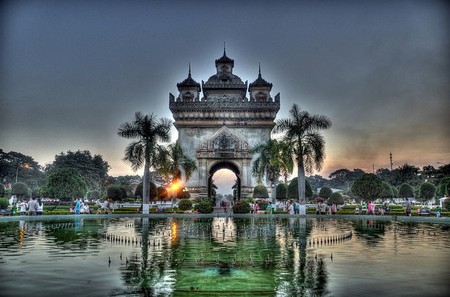 The Night Market or Chinese Market opens daily along the riverfront as the sun goes down over the Mekong and stays open until 9:30pm. Merchants sell all manner of souvenirs and food from carts and red-roofed tents. Construction has begun on a more permanent market down at water level that is scheduled to open in 2018. 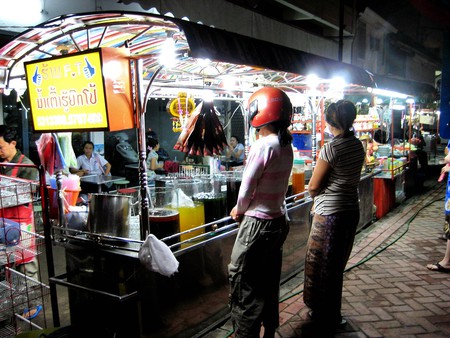 The great golden stupa is a national symbol of Laos both of Buddhism and national sovereignty. Legend has it that part of Buddha’s breast bone is buried here. Originally dating back to 300 CE, the most recent restoration was completed in the 1930s. In November visitors can take part in the three-day Boun That Luang Festival, one of the biggest in Vientiane. 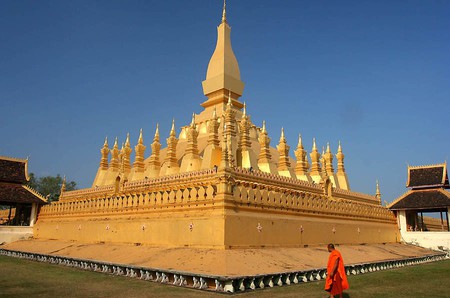 Buddha Park, also known as Xieng Khuan is located about 16 miles (26 km) outside of Vientiane Capital. The riverside park contains more than 200 Buddhist and Hindu concrete statues. The statues were built in 1958 by Luang Phu Bounleua Soulilat, who fled Laos in 1975 when the Communist party took over the government. 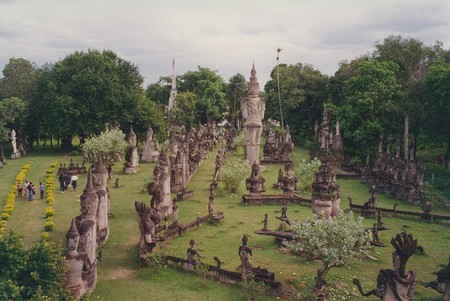 Located on Kouvieng Road just down from the morning market, the COPE Visitor Center shows the dark history of the Lao Civil War and the 260 million bombs that were dropped on Laos from 1964-1973. COPE provides artificial limbs and rehabilitation for people, many of them children, who have lost limbs due to UXOs, or unexploded ordinances. 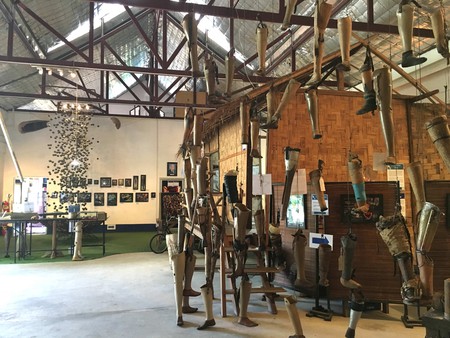 Vientiane, like the Lao cities of Thakhek, Savannakhet and Pakse, lies on the banks of the Mekong River. Translated to Mother Water, this river forms much of the border between Laos and Thailand. The riverfront park and bike path offer a perfect respite to relax and people watch. 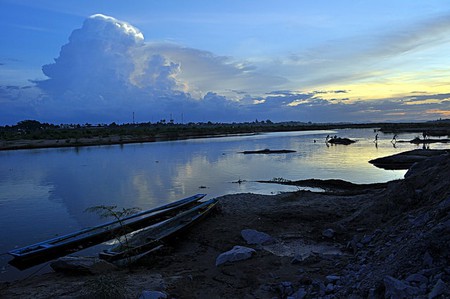 Tours at the Lao Disabled Women’s Development Centre are sure to bring a smile to any visitor’s face. Open Monday to Friday, the Centre offers tour options ranging from a Bacci ceremony, to handicrafts workshops and lunch in the garden. 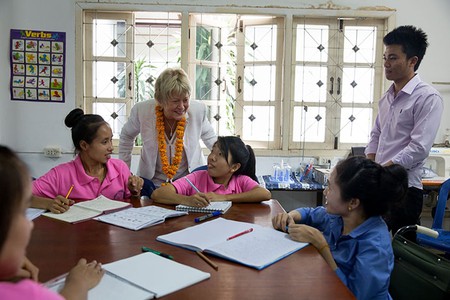 Ho Phra Keo is a former temple turned into a museum to house Buddhist relics. It was originally built in the 1560s to house the Emerald Buddha where it stayed for over 200 years. The Buddha was taken to Wat Phra Kaew in Bangkok when the Siamese sacked Vientiane in 1779, but Ho Phra Keo still stands. 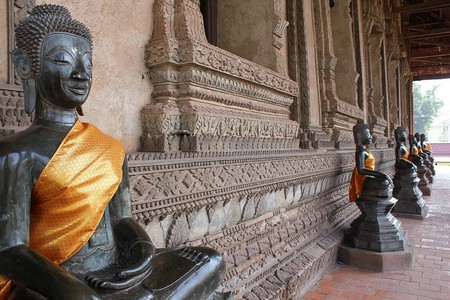 That Dam means Black Stupa and this monument is said to house a seven-headed Naga serpent who protects the citizens of Vientiane. Located on Chantha Khoumane road, the brick stupa was once covered in gold, but according to legend, the Siamese took it when they invaded Vientiane in the 1820s. 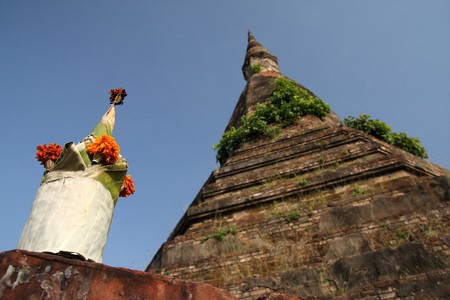 Tucked away behind the newly constructed Vientiane New World shopping center is a maze of street vendors and pop-up bars serving food and drink after dark. A skating rink rents rollerblades and speakers pump out American and Thai pop music. Some of the vendors have outdoor seating areas and others offer fare on a stick to take away. 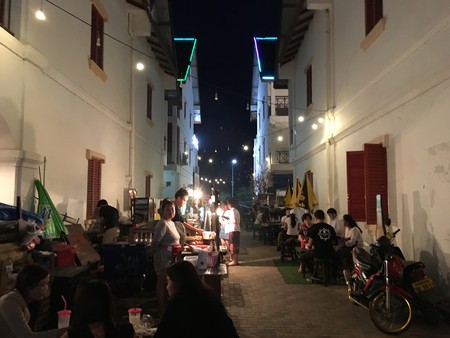 The city temple, Wat Si Muang is one of the most beautiful temples in Vientiane. A popular story tells of a pregnant woman who sacrificed herself to calm the angry spirits by jumping into the hole where the massive city pillar was to be placed. Many people pray for good luck here. 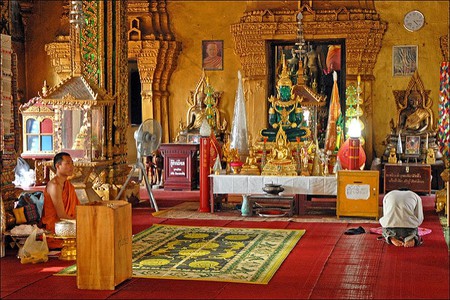 Take a long bicycle ride or hire a tuk-tuk out to Tad Moun Waterfall in Vientiane Province. The falls themselves are more akin to mild rapids, but the day can be enjoyably spent hiking through the jungle, or splashing in the water. Thatch huts are available to rent for a picnic lunch and vendors sell food, ice cream and Beer Lao. 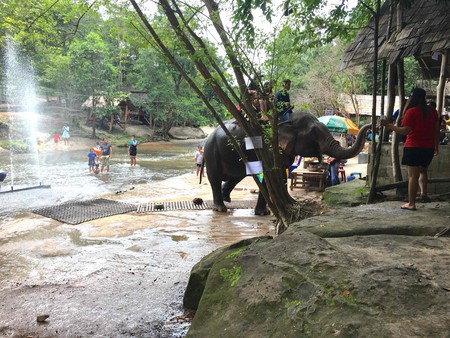 Nam Ngum means beautiful water and the reservoir created by the dam of the same name certainly fits the bill. Hydropower is one Laos’ top exports and Laos’ largest lake has the added bonus of attracting tourists for boat rides, fishing and swimming. Visit the dam itself, the salt factory or the nearby casino on your way to or from Vientiane Capital. 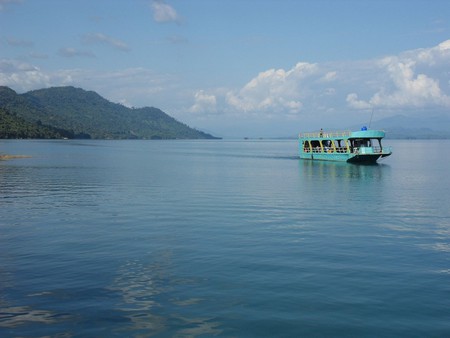 The Kaysone Phomvilhane Memorial Museum pays tribute to the leader of the communist revolution and former President of Lao PDR. Two floors contain information and artifacts about Lao revolutionary history and Kaysone’s life. Outside the museum are two statues, one of the president himself and the other of socialist workers surrounding the Lao flag. 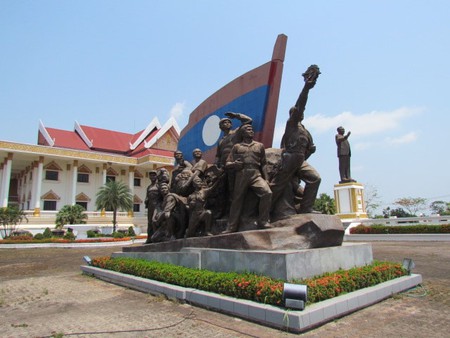 Wat Si Saket is located across from Ho Phra Keo and is home to a collection of more than 2,000 Buddha sculptures displayed in a covered walkway around the temple. There is also a museum on the grounds and many fruit trees for visitors to meander through and enjoy. 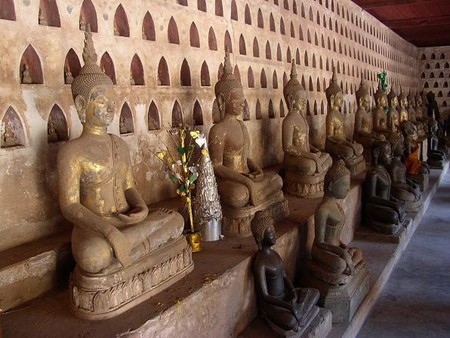