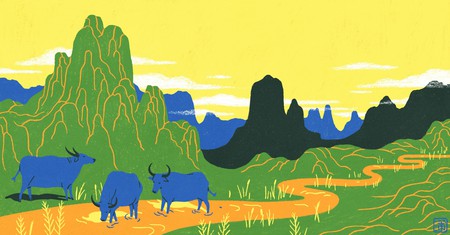 Laos is a majority Theravada Buddhist country deeply steeped in animist tradition. Many Lao ethnicities such as the Hmong, Lao Theung and Lao Sung practice ancestor worship and believe in spirits. However, even practicing Buddhists are known to weave animist traditions such as Baci ceremonies, spirit houses and superstition into their lives. Here are 11

Boun Bang Fai or the Rocket Festival takes place during the hot season in the sixth lunar month. Homemade rockets are shot into the air as a celebration of fertility and to carry prayers to the rain gods to encourage them to bring on the rainy season. Awards are given for the rocket that flies the highest, the most beautiful and the most entertaining team. Losers are dunked in a muddy puddle and made to drink muddy water or rice whiskey. 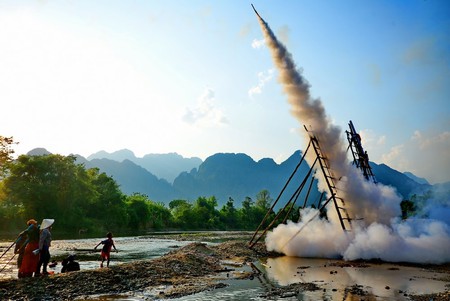 Animists believe that each human’s soul is comprised of 32 Kwan. These life forces harmonize and balance the body. Each kwan watches over and protects a specific organ of the body. Illness is caused when one of these spirits leaves the body, causing disharmony and rendering the person ill. The baci ceremony helps retrieve the kwan and re-establish spiritual equilibrium.

The Baci Ceremony or Soukhwan calls all 32 parts of the soul back together by tying white cotton strings to the wrists of the guest of honor. A centerpiece is constructed of banana leaves and flowers. Bacis are held for newborn children’s naming ceremonies, weddings or when someone takes a trip or recovers from an illness. 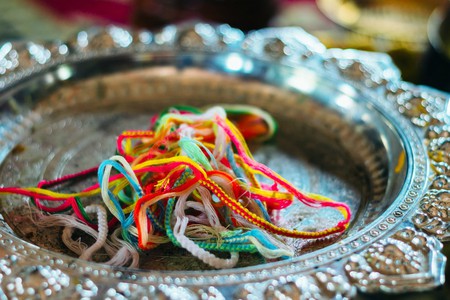 Phi is the generic Lao term for ghost or spirit. Some spirits manifest as the elements of earth, wind, water and fire. Others live in mountains, rivers, fields and on specific plots of land. It’s important to consult the land spirits before building a new home or building. Whistling at night attracts spirits and is not recommended.

While the Lao don’t believe spirits are necessarily good or evil, they do believe they are mischievous and must be appeased or they may cause trouble. Most homes, businesses and many temples have a small spirit houses for their land spirits to reside. The houses can be simple and made of wood or elaborate and covered in mosaics. Each spirit house has a porch for offerings of water, rice, candles, flowers and incense. Well fed spirits don’t cause trouble. 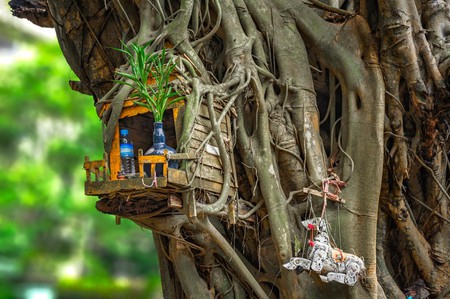 Ancestor spirits look out for the family and protect the home. The spirits live in the house and alters dedicated to deceased relatives can be found in many homes. The ancestor spirits are partial to buffalos, so skulls are a common feature of the alter, and some groups sacrifice buffalos in a ceremony to honor the spirits. 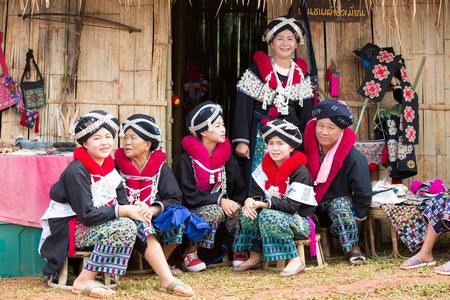 Shamans can be men or women who have special connections to the spirit world and can lead sacrifices and rites as a medium between the two worlds. If a spirit is lost in the spirit world, a shaman can can go to heaven and bring it back. The shaman sits on a wooden bench with a cloth covering his or her face and begins to chant and shake, eventually mimicking climbing a ladder to heaven to retrieve the lost spirit.

When a Lao person dies, the body is kept in the family’s home for three days before it’s cremated and interred in a small stupa. Friends and family bring food and visit, play cards, drink beer and share stories and laughter with the family. A vigil is kept with candles, and someone watches the casket for the entire wake period. Young children don’t attend funerals since they are more susceptible to spirits from the afterworld who might be hanging around the house. 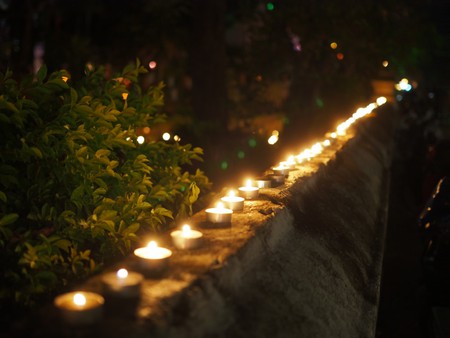 It’s not uncommon for Buddhist and animist traditions to blend. This isn’t problematic on either side since monks have been known to perform baci ceremonies and are sometimes called upon to excise malevolent spirits from homes. You’ll almost always see a spirit house erected on buddhist temple grounds. This peaceful blending of traditions epitomizes Laos’ laid-back and inclusive attitude. 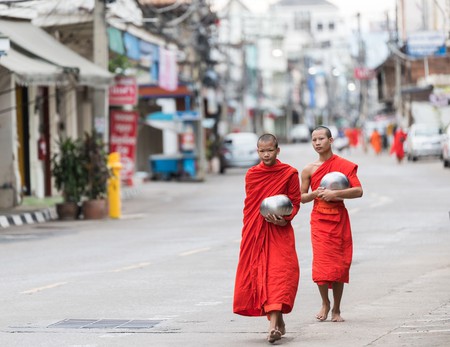 Lao people are known to be superstitious, look for auspicious dates to hold ceremonies and believe if you cut your hair on a Wednesday or on your birthday, you’ll shorten your life. If your right eye twitches, it’s a sign of good luck but if your left eye twitches, watch out! Cover the sticky rice basket when you finish, or you may never find a mate and whistle at night at your own risk — it attracts ghosts.