Zvika Serper: The Foreigner Behind The Mask In Japanese Traditional Theatre 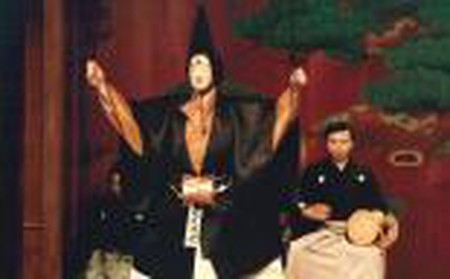 The classical forms of Japanese theater (Noh, Kyogen and Kabuki) are each invested with profound cultural importance in Japan, and are each performed by highly skilled practitioners who have devoted themselves to their form of theater. Zvika Serper is one of the only Westerners to have gained access to these hermetic worlds and, as Beryl Belsky from The Writer’s Drawer relates, his accomplishment is made all the more astounding by his performance of all three forms of Japanese theater. 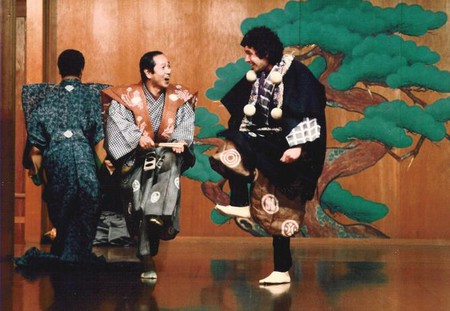 When Zvika Serper left Israel for Japan at the beginning of the 1980s after completing his theatre studies at Tel Aviv University, he had a clear objective: to train in the main forms of Japanese classical theatre so he could incorporate aspects of the art into Western theatre. This culminated in the incredible achievement of playing the lead role in the three principal performing styles of Japanese traditional theatre – Noh, Kyogen and Kabuki -something that no other person in Japan, Japanese or Westerner, has done to this day.

The austere Noh is the oldest form of Japanese theatre, dating from about the fourteenth century. The plays tend to be sombre, dealing with themes such as human destiny, and often feature ghosts, gods, and demons. But they may also retell well-known works of Japanese literature, such as The Tale of Genji or The Tale of the Heike. Noh requires a highly stylised form of acting that involves singing, dancing, and chorus chanting, and has a set format: a principal actor (shite) supported by a companion actor and a secondary actor with a 6-8 man chorus and 3-4 musicians playing traditional instruments. The shite (and sometimes his companion) wears a mask (omote/men = face) and may don five or six layers of clothing in order to create a larger-than life character. The stage is simple, with almost no scenery, and props are few but highly significant to the drama.

Kyogen, traditionally associated with Noh, is performed on the same stage. Kyogen is shown between Noh productions; it can be an independent piece, offering comic relief from the more sombre Noh theatre, or it can take place during the short intervals of a Noh play; in this case, it is usually connected to the main drama and explains the narrative in a simple way. In contrast to the lofty Noh, Kyogen plays tend to deal with the lives of simple people – a master and a servant, or a man and his wife − but they sometimes present characters such as gods and demons in a satiric fashion. Together, Noh and Kyogen form the dual art of Nogaku. 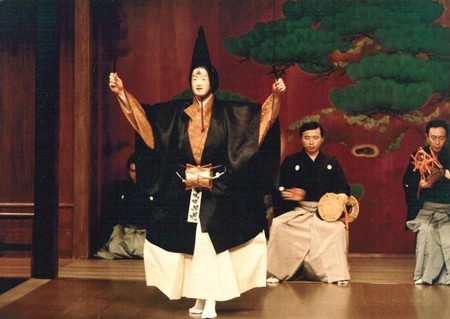 Unlike Noh, which was usually performed in Buddhist temples or Shinto shrines, Kabuki was a commercial theatre form originally performed by women and associated with prostitution. As a result, women were banned from performing by the Tokugawa Shogunate in the 17th century, and were replaced by an all-male cast, with men also playing the female roles (onnagata). Kabuki themes deal with historical events, moral conflicts and affairs of the heart. The performances are lavish and colourful but, like Noh, some Kabuki plays are also highly stylized, featuring dance, dialogue and choral singing. The shallow Kabuki stage has a catwalk through the audience (hanamichi), allowing dramatic entries and exits.

While pursuing research at the Noh Theatre Research Institute of Hosei University, Tokyo, Serper began training in the art of traditional theatre. Although his request to become proficient in all three drama forms was highly unusual, his instructors agreed to teach him. It should be pointed out that when students of Japanese traditional theatre learn a particular style, whether Noh, Kyogen or Kabuki, they almost never perform in another one. Moreover, training for classical theatre was typically a family affair, passed down from generation to generation; this tradition continues, to a certain extent, today, although there are now also schools for teaching young actors outside this framework, such as the National Theatre in Tokyo.

In contrast to Western theatre, traditional Japanese acting is learnt by rote and imitation − ‘from outside in’ rather than ‘from inside out.’ The instructor sits in front of the pupil reciting the lines, which the latter has to repeat until he has perfected the words with the correct voice, cadences and intonations. The instructor then demonstrates the stylised dance or acting movements for the pupil to follow. The result of the two systems of teaching is the same: integration between the inner and outer forms to create the complete character.

Serper took part in various performances of Kyogen, Noh and Kabuki during his time in Japan. However, among his proudest memories was playing the lead role in all three styles. After only a year and a half of training, Serper’s Kyogen instructor, Nomura Mansaku, honoured him by giving him the title role in Kagyu (The Snail), while he himself assumed a secondary role, during a marathon of Kyogen plays in Tokyo. Serper was the yamabushi (hermit monk) who was discovered by a servant; this servant had been sent by his master to bring him a snail for his grandfather which would act as an elixir for long life. Ignorant of what a snail looks like, the servant asks the yamabushi if he is one. The yamabushi pretends that he is a snail, but insists that the servant dance with him before the latter can bring him to his master. The angry master eventually finds his servant dancing with the yambushi, and after convincing the servant that the yamabushi is a human being, the yamabushi laughs at them and runs away. 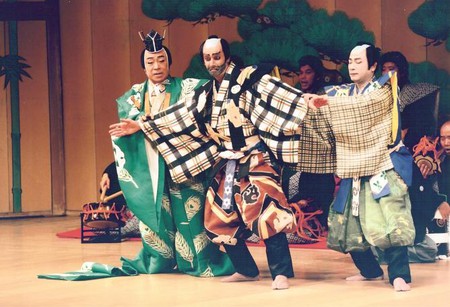 In 1984, Serper played the title role in the Noh play Jinen Koki (Jinen the Preacher), accompanied by his teacher Asami Masakuni. The drama tells the story of a girl who sells herself into slavery in order to be able to buy a kimono for the preacher, Jinen, so that he will pray for her dead parents. It continues with Jinen’s desperate attempts to secure the release of the girl by returning the kimono, while her captors make their own demands, such as forcing Jinen to dance.

Surprisingly, there is only ever one rehearsal for a Noh play and one performance. The same play may be performed only months later, also once. There is no director, the actors learn their parts with their instructors and then meet for the single rehearsal. The principal actor also serves as producer, organising the performance and procuring items such as costumes, wigs and stage props. By contrast, in Kabuki several rehearsals are held toward the end of the month, followed by a month of performances (at the end of which are a few more rehearsals for the next month’s program). Preparations for Kyogen are similar to those of Noh, but are obviously much easier as the plays are shorter, with less music and more acting. Dressing for a Noh performance is particularly cumbersome due to the many layers of costumes the lead actor may have to don, followed by the wig and finally the mask.

While cultural events are well covered by the media, it is rare to see critical reviews of traditional performances in the Western sense. Thus, there were no such reviews of Serper’s appearances. As far as audience reaction was concerned, it should be stressed that people came to the productions specifically to see him perform. 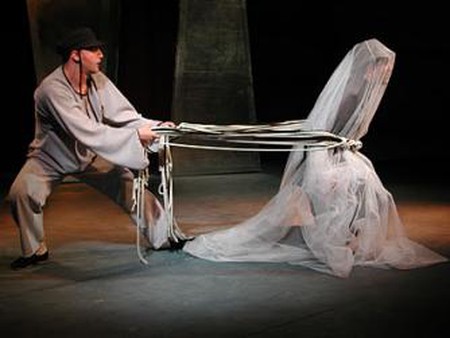 Since returning to Israel, Serper has worked to incorporate various Japanese aesthetics and techniques into Western drama. Among his projects, he produced and directed classics such as Aeschylus’ Agamemnon (1993) and Shakespeare’s Macbeth (1996), as well as S. Ansky’s Yiddish play The Dybbuk (2002). The latter, about a bride possessed by a ‘dybbuk’, believed to be the dislocated spirit of a dead person, is well suited to the concept of Noh drama, and this production, as well as Serper’s previous ones, was highly acclaimed. These plays, all produced in Hebrew, videotaped and sub-titled in English, have been shown at academic and artistic venues around the world.

Zvika Serper is currently an associate professor in the departments of East Asian Studies and Theatre Arts at Tel Aviv University, where he continues his practical work of bridging Eastern and Western theatre/acting techniques, as well as his academic research on comparisons between and fusions of Japanese and Western theatre. He travels abroad frequently giving lectures-cum-demonstrations and conducting master classes and workshops in acting and movement techniques at theatres and universities, such as the Graduate Acting Program of Tisch School of the Arts, New York University; the Department of Theatre, University of California, Los Angeles (UCLA); the School of Oriental and African Studies, University of London; the Department of Literature, Waseda University, Tokyo; and the National Academy of Cinema, Television and Theatre in Lodz, Poland.

Beryl Belsky is a graduate in East Asian Studies from the Australian National University and currently works as an academic editor at Tel Aviv University. Her blog, The Asia Collection, from which this article is taken, offers the Western reader glimpses into some lesser known aspects of Asia, as well as into subjects connected to the region that are of interest to her personally.

A Note from Beryl:

I would like to thank Professor Zvika Serper for letting me interview him, for informing and correcting me, and for answering my questions so patiently. I am also grateful to him for allowing me to publish photos from his personal collection.