Yuru-Chara: These Are Japan’s Most Popular Mascot Characters 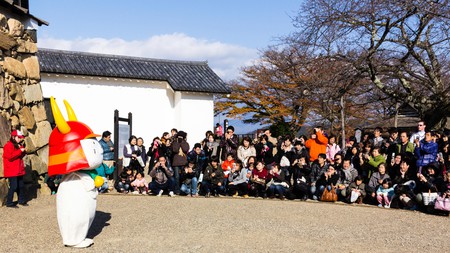 Yuru-chara are Japanese mascots used to promote a region or brand. Here are a few popular characters that range from cute to downright creepy.

In Japan, cute cartoon characters aren’t just associated with children’s television programmes. Yuru-chara, or mascot characters, can have a connection to just about anything, from a city or region of the country to an event or business. These kawaii (the Japanese culture of cuteness) characters help to drive sales and create publicity, and the Japanese people are obsessed with them, making yuru-chara an important part of modern Japanese culture. 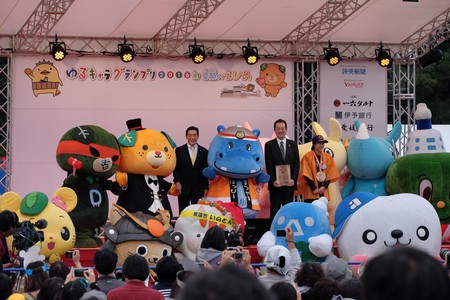 Yuru-chara characters have been around since the early 2000s, and there are now thousands of these characters in Japan. Here are a few of the most famous.

Not to be confused with Shikamaru Nara, a character in the Naruto manga and anime series, Shikamaro-kun is a yuru-chara modelled after the most famous residents of Nara – the sika deer. A short journey from Kyoto, Nara is an ancient capital of Japan and a quirky tourist destination. Nara Park is massive and full of cultural relics, but people usually visit for the deer that roam freely around the park and will happily pose for photographs. This adorable mascot is the perfect souvenir from a trip to Nara.

From cute to creepy, another mascot from Nara is Sento-kun, a baby-faced boy with deer antlers. Nicknamed ‘Buddha Boy’, this mascot has received criticism since it was unveiled in 2010. Combining two iconic symbols of the city – the deer and the huge Buddha statue – this yuru-chara has found particular disfavour among religious groups who consider the amalgamation to be abhorrent. However, since this mascot’s unveiling, there has been a deluge of other ugly or unusual yuru-chara in Japan; therefore, while Sento-kun was once marked for his appearance, he’s not nearly as disliked today as he was at his debut.

One of the great things about yuru-chara is that even an unofficial, amateur mascot can achieve stardom. Funassyi is one such mascot, rising to fame after its creation by a citizen of Funabashi in Chiba. Neither male nor female, Funassyi is a pear fairy, and despite not being an official mascot of the city, it has released four CD albums and starred in its own anime series. Unique in its behaviour, Funassyi doesn’t plod around silently like other yuru-chara. It speaks for itself, is always dancing and shrieking, and has a penchant for headbanging – its favourite music is heavy metal. 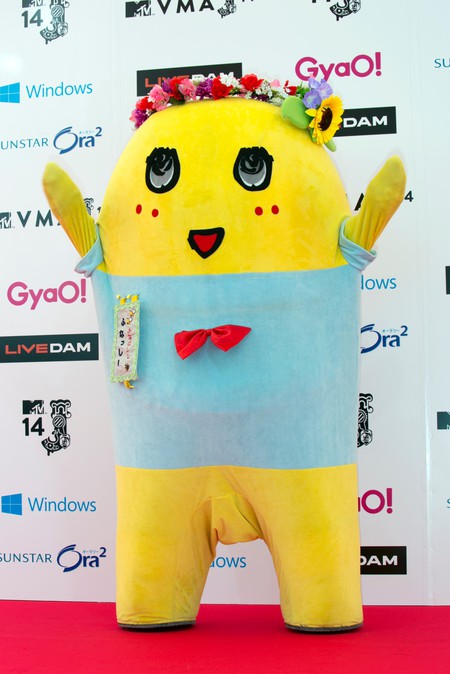 Another unofficial yuru-chara is one that has gained notoriety and is shunned by many in the locality that it hoped to represent. Chiitan is a yuru-chara of the port city Susaki, Kōchi prefecture. Created in 2017, it wasn’t long before this unruly character was causing chaos and consequently rejected by Susaki officials. The otter baby, who wears a pink turtle as a hat, isn’t innocently clumsy in the way that many yuru-chara are but has been described as violent, creepy and dangerous. Antics that the otter gets up to include falling off a bicycle while firing a bow and arrow, playing with a motorised weed cutter and other slapstick stunts. Bearing a close resemblance to Shinjo-kun, the official otter mascot of Susaki, Chiitan was criticised for its negative brand, despite the popularity of the character’s YouTube channel and other social media platforms.

Created in 2007 to mark the 400th anniversary of Hikone Castle – the cat even wears a samurai helmet inspired by an artefact in the castle museum – Hikonyan is the mascot of Hikone in Shiga prefecture and has its roots in local legend. The story tells of a white cat who saved the third lord of Hikone by beckoning him inside a temple to shelter him from a terrible storm. In Japan, cats are hugely popular, and this cute yuru-chara is credited with improving Hikone’s tourist industry income to the tune of around ¥17.4 billion (£120 million). 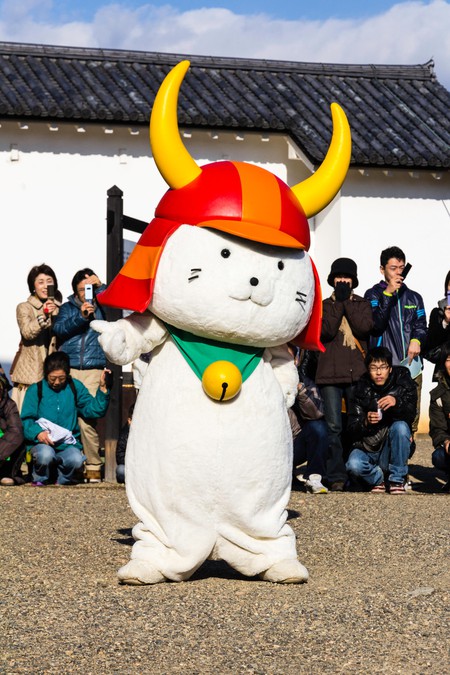 Not all yuru-chara are known for their cute appearances or loveable antics. Melon Kuma represents Yubari city in Hokkaido, a place known for bears and melons. And though those things have the potential to form a cute mascot, Melon Kuma is a menacing bear with a melon as his head. His terrifying features, such as a savage snarl, blood-red tongue and pulsing green-veined head, make this character one that few children will want a key ring of to hang on their school bag. At mascot events, Melon Kuma runs around attacking other characters and, in turn, is pummelled by loyal fans of the cuter characters.

If you’re a dog-lover, this is the mascot for you. Sanomaru from Sano city in Tochigi has endearing puppy-dog eyes that mark him as a true kawaii character. He wears a ramen bowl as a hat, complete with a fringe of noodles, and holds a stick of fried potatoes (both of which are popular local dishes). Sanomaru was a Yuru-Chara Grand Prix winner in 2013, and he’s also the leader of Yuru-tō, a group of six yuru-chara who attend events together and hold ‘meetings’ to promote their different prefectures. 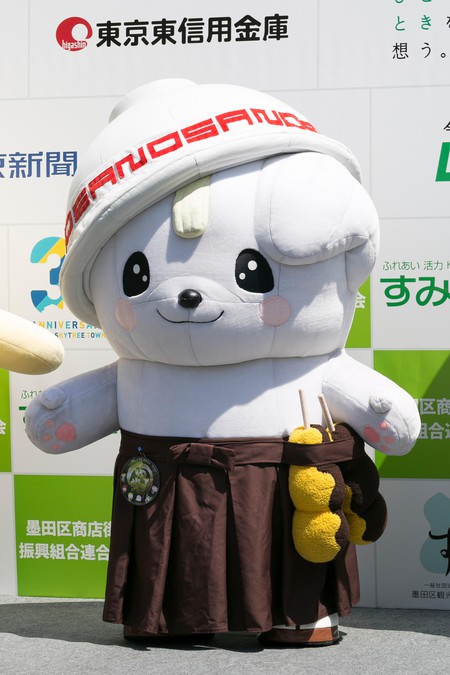 This character looks like a cross between a rabbit and a deer and has spring onion antlers sprouting out of its head (Fukaya city in Saitama prefecture is famous for Fukaya-negi, a variety of Welsh onions). The city is renowned for its tulips, which is why Fukkachan has tulip-shaped buttons on their green dungarees. While the affix ‘-chan’ would indicate that this yuru-chara is female (as opposed to the male affix, -kun), Fukkachan is of unidentified gender. Fukkachan’s busy appearance schedule is available on their website, and as a member of Yuru-tō, you can expect to see them alongside Sanomaru and the other four members of the group.

It’s not just cities that have mascot characters, and one of the best-known yuru-chara in Japan represents Nippon Hōsō Kyōkai (NHK), which is Japan’s national broadcasting organisation. The name Domo is taken from the greeting “dōmo, konnichiwa”, which translates as “Well, hello there!” The fuzzy brown, open-mouthed character may not look as cute as his other famous yuru-chara friends, but he has become a sensation through his connection to NHK and also has a television series. 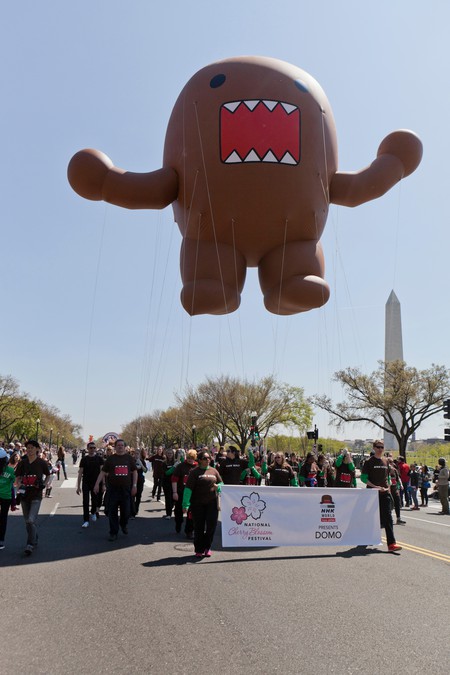