Yukio Mishima: The Turbulent Life Of A Conflicted Martyr 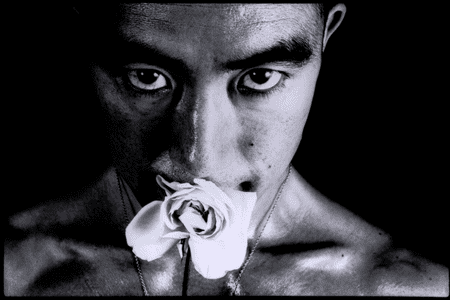 Yukio Mishima remains one of Japan’s most celebrated writers, a controversial novelist who engaged with the contradictions within Japan’s national identity, and within his own tortured psyche. Beryl Belsky of The Writer’s Drawer looks at his life and work, and questions whether his infamous death was an instance of brave Harakiri or defeatist suicide. This article will attempt to illustrate Mishima’s dichotomous nature and the mystery of his death through a brief look at his life and some of his works. 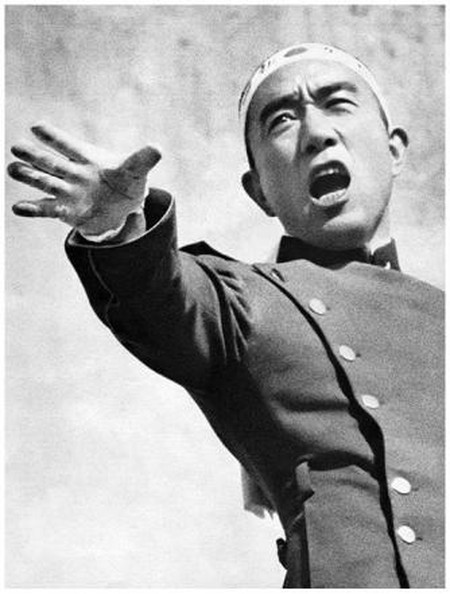 ‘Mishima took one of them [a sword] and demonstrated the procedure for harakiri… Then he said he would show me how a samurai used to help a friend commit harakiri. He told me to kneel down on the mat. I could feel that sharp edge of the sword almost touching the back of my neck. I was terrified’ – Philip Shabecoff, Everyone in Japan Has Heard of Him.
On November 25, 1970, novelist, playwright, actor, and believer in ‘the samurai way’ Yukio Mishima stood on a balcony in front of some one thousand servicemen at the Tokyo command of the Eastern Headquarters of Japan’s Ground Self-Defence Forces. Here, he exhorted them to rise up against Japan’s post-war Constitution, which prohibits the country from having an army and forbids war. He then turned back to the room where he and four followers had barricaded themselves and proceeded to perform hara-kiri – ritual Japanese suicide. This involved driving a razor-sharp Japanese sword into his stomach and then having his head sliced off by a waiting friend.On the day of his death Mishima had delivered to his publishers the final pages of Tennin Gosui (The Sea of Fertility), the author’s account of the Japanese experience in the twentieth century. 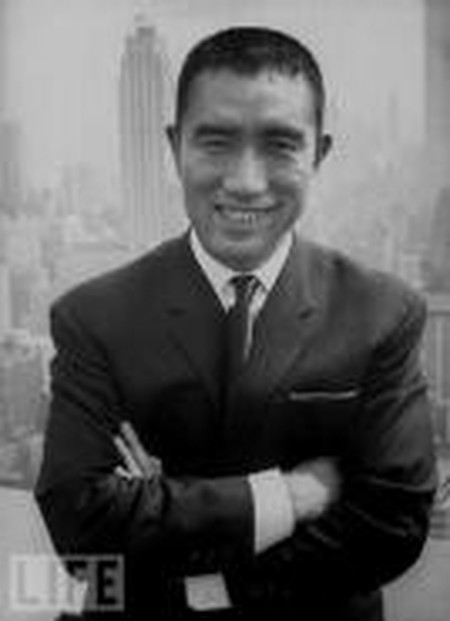 Yukio Mishima, born Kimitake Hiraoka (1925-70; Yukio Mishima was his pen name) was the author of some 40 novels, as well as numerous plays (including in the traditional Noh and Kabuki styles), books of short stories and essays. He also acted in and directed several films. Many of his works were translated into English and he was nominated for the Nobel Peace Prize in Literature three times. Internationally, he was probably the most well-known Japanese writers of the twentieth century and his grasp of English and German combined with his suave Western exterior made him a sought-after, though elusive, interviewee among Western journalists.
Mishima spoke increasingly of the empty, materialistic values of post-war Japanese society and of the need to promote the discipline and principles of medieval Japan. He believed that one way to bring back traditional ideals was to restore the divinity of the emperor; another way was to follow bushido (‘the samurai way’). While he claimed he was not a militarist (‘… most foreigners mix up militarism and the samurai spirit’), in 1968 he nevertheless formed his own militia, the ‘Tatenokai’ (Shield Society), made up of some one hundred university students who, under his tutelage, took part in training exercises, learned martial principles and physical discipline, and swore to protect the emperor. According to Mishima, the students were a disaffected minority on the campuses because they did not identify with the majority of leftist ideals. 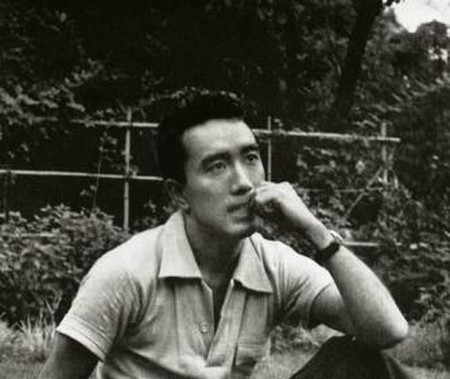 The dramatic end to Yukio Mishima’s life highlights the enigma of his character, which consisted of a mass of contradictions: weak versus strong, masculine versus feminine, physical versus intellectual, eroticism versus aestheticism, elegance versus brutality, beauty versus ugliness, purity versus pollution, East versus West, ‘brave harakiri’ versus ‘defeatist suicide.’ Critic and director Harold Clurman, with whom he had become friends, highlights these antitheses:
‘Brought up by a grandfather jealous of all outside influences on the boy (including that of his parents), which led to his being sickly, he later trained to build powerful muscles in his arms, chest and shoulders. An ardent patriot, frightened by the prospect of combat as a soldier [he managed to avoid serving in the military in World War II]; he steeled himself to assume the demeanour of heroic bravery. An impassioned writer, he declared, ‘There was something inside me that cannot be satisfied with art alone.’ Homosexual, he married a very pretty woman who bore him two children and with whom he conducted himself as a model husband. Apolitical, he organized a para-military group – the Shield Society – which might easily, though mistakenly, be identified as fascist’ – Harold Clurman, The Life and Death of Yukio Mishima.

Even Mishima’s formative years were a contradiction. Born in Tokyo, he was taken as a small child to be brought up by his aristocratic grandmother, Natsu, who kept him by her side constantly and forbade him to go outside to play with other boys. When he returned as a weak, sickly boy to his parents at the age of 12, his father, who was attracted to military discipline, tried to harden his masculine side by holding him up against a speeding train and ripping up his manuscripts, saying writing was ‘feminine.’ This tussle between the ‘masculine’ and ‘feminine’ side of his character continued throughout his life. 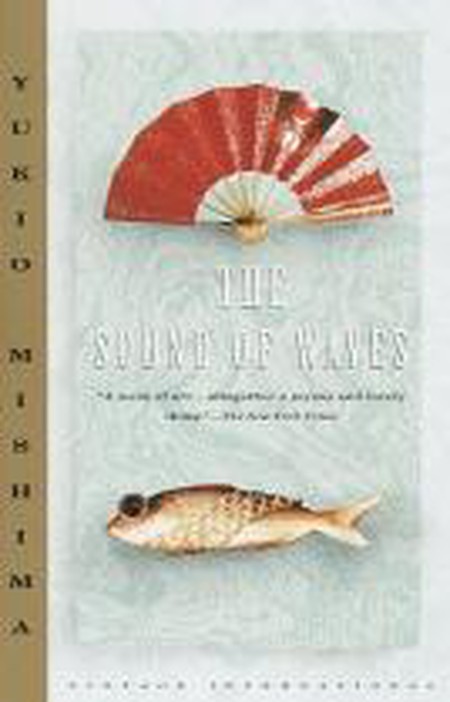 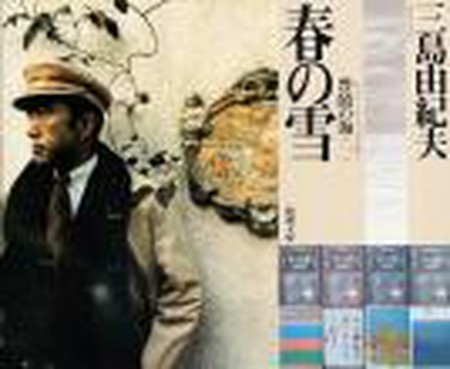 Obsession is a motif running through several of Mishima’s works. In The Temple of the Golden Pavilion (Kinkaku-ji, 1956), for example, an unattractive, stammering young acolyte is so consumed by the beauty of the Temple of the Golden Pavilion where he is a student that he decides to burn it down in order to free himself from his fixation. The novel – like several others of Mishima’s works – is based on a real incident: in 1950, a crazed, also stammering young monk was driven to burn the six-century-old Zen Temple of the Golden Pavilion in Kyoto. Neither he nor the novel’s protagonist carries out his wish to be immolated together with the temple.
Mishima’s obsession with the cult of the body was also connected to his desire to remain young and beautiful. The writer in Forbidden Colors is described with obvious distaste – a decrepit ‘ugly old man’. He hints in his various interviews that he does not want to die old and ugly. In 1970, Mishima explained admiringly that when samurais commit harakiri, they make up their faces first in order to stay beautiful, even in death. 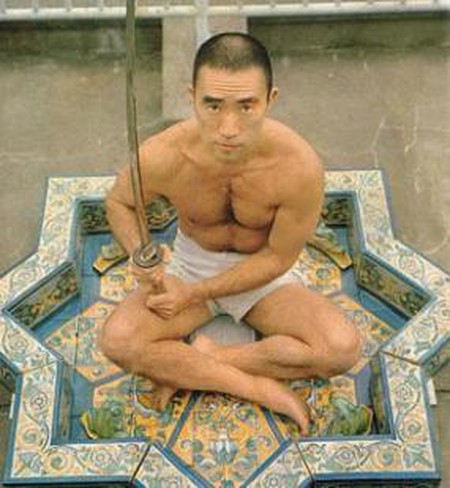 ‘[His body] was like the Apollo moulded in bronze by an artist of the Peloponnesus school. It overflowed with gentle beauty and carried such a noble column of a neck… such a softly broad chest… such a rapidly tapering tightly filled trunk, such legs, stoutly filled out like a heroic sword…’
A year later, however, Mishima published another book in an entirely different vein – The Sound of Waves (Shiosai, 1954). This was a ‘clean,’ traditional love story between a poor young fisherman, Shinji, and Hatsue, the daughter of a well-to-do ship owner on a remote Japanese island. As in many such stories, their love has to undergo many trials before Shinji proves to Hatsue’s father that he is worthy of her. For Western readers, the simplicity and universal appeal of this tale makes it probably the most palatable and enjoyable of Mishima’s books.
Alongside his writing and philosophizing, Mishima took up body building and kendo (literally, ‘the way of the sword’), the traditional Japanese art of swordsmanship, which uses a long bamboo-handed sword. He was attracted to kendo, he said, because it brought you to the ‘border of life and death.’ He would spend long hours during the day honing his body and his swordsmanship, and write all night. In his 1968 autobiographical essay Sun and Steel, where he talks about his relationship with his physical self, Mishima decried the notion, stressed by intellectuals, of mind over body. Translator and critic Edward Seidensticker points out in Yuichi Was a Doll that ‘fundamental to all of Mishima’s writing’ is ‘a denial of intellect and glorification of the senses.’

One of the most striking features about Mishima was his superficial Western-ness in contrast to his inner Eastern-ness. His house, for example, was a dream of late Victorian, bourgeois opulence. The walls of its high-ceilinged parlour drip with oil portraits of languishing 19th century beauties and sailing ships rolling in lushly romantic seascapes. A grilled balcony is stuck gratuitously into a lofty wall. A marble-topped table is inscribed with the Roman initials ‘YM.’ Baroque and rococo objects are scattered on tables and shelves.
The meals he (or rather his wife) served were also Western-style. However, he was extremely proud of his display of samurai swords and kendo equipment, which were very much in use. And his talk in his later years was all of the emptiness of modern Western values and and of his yen for the masculine, samurai Japanese traditions. 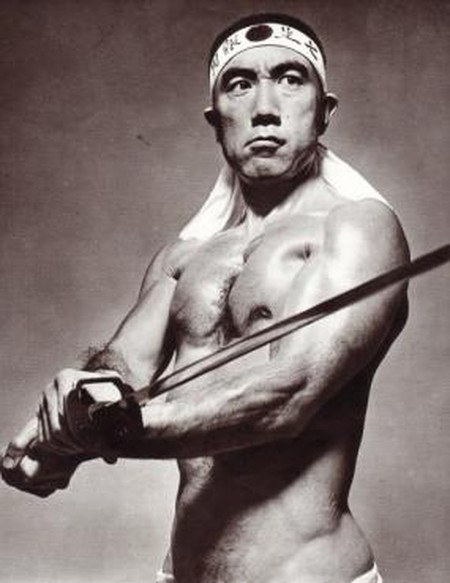 His emphasis on masculinity was also a reaction to postwar Japanese society and its adoption of Western values: because of Japan’s defeat in World War II and the American occupation, he maintained, Japan had been cowed into hiding its real self:

’Since World War II, the feminine tradition has been emphasized to the exclusion of the masculine. We wanted to cover our consciences. So we gave great publicity to the fact that we are peace-loving people who love flower-arranging and gardens and that sort of thing… The Government wanted to cover our masculine tradition from the eyes of foreigners as a kind of protection’.

A few months before he killed himself, he explained:

‘… the more I got back to Japanese tradition, the more I was able to achieve a positive character. It is my firm belief that our basic Japanese character was stunted by Westernization. We have learned mental disease and shame from the West. Thus my shift to positive characters is in effect a Japanizing [sic] process.’ – Quoted in Shabecoff’s, Everyone in Japan Has Heard of Him.

Mishima spoke increasingly of death and lamented the absence in modern times of ‘great causes’ to die for. In his 1970 interview, he described the samurai notion of killing oneself as ‘brave harakiri,’ in contrast to the Western view of suicide as ‘defeatist.’ However, while he was exhorting the young soldiers to rise up against the established order, Mishima was booed and jeered, with shouts of ‘Get down,’ and ‘Go home.’ Many Westerners might therefore regard his bloody deed as ‘defeatist suicide.’ Whether the coup attempt was merely a pretext for killing himself is unclear. There is no doubt that it was planned, since he had prepared jisei no ku (traditional death poems) well in advance and made provisions for his wife and children. What is clear is that Mishima considered his act ‘brave harakiri,’ a fitting end for a proud samurai. ‘Harakiri makes you win,’ he pronounced.
‘I don’t want to revive harakiri itself … I wanted to inspire younger people, give them a sense of order and responsibility’ – Yukio Mishima Speaking in English.

Beryl Belsky is a graduate in East Asian Studies from the Australian National University and currently works as an academic editor at Tel Aviv University. Her blog,The Asia Collection, from which this article is taken, offers the Western reader glimpses into some lesser known aspects of Asia, as well as into subjects connected to the region that are of interest to her personally.