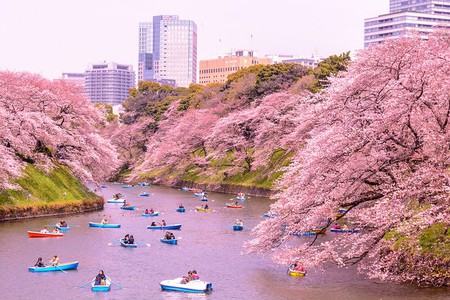 Japan is a mysterious country, filled with history and cultural niches there’s no question as to why it’s become a muse for many musicians and artists over the years. To really explore the sonic landscape of Japan we’ve put together this ultimate Japan playlist. Featuring Japanese and foreign artists and songs from both the past and present day it’s a musical journey as eclectic and fascinating as the country itself.

While a little cliché, ‘Alone in Kyoto’, the stunning ambient gem from French duo Air is a must add to any Japan themed playlist. This single was one of the standout tracks from the 2003 cult film Lost in Translation. Though this track is instrumental, it definite says a lot without lyrics. Ambient and lonely while maintaining a feeling of comfort it perfectly encapsulates the feeling of travelling through Japan’s countryside where stunning beauty and unfamiliarity collide.

On the more abrasive end of the spectrum ‘Linda Linda’ by Japanese rock band The Blue Hearts is pretty much the country’s alternative national anthem. A staple on every booze soaked karaoke playlist and one of the most covered Japanese songs of all time, it is almost impossible not to sing along to this hooky earworm .

More of an obscure track on the list but it’s worth your attention. ‘One Summer’ is taken from Australian based producer Ghosting’s (aka Andrei Eremin) ambitious debut instrumental mixtape Reimagining Miyazaki which was released earlier this year. On this release Eremin reworked a number of iconic tracks from the soundtracks of Hayao Miyazaki’s films. ‘One Summer’ is the glittery remake of the Spirited Away gem.

As the story goes, Weezer front man Rivers Cuomo wrote this track after receiving a letter from a young Japanese fan. In the song Cuomo addresses the fan and her letter, in which she asked questions about his everyday life. Upon receiving the letter Cuomo fell into some sort of unknowing love with the fan. It’s a bit of a weird story but in another way it’s also incredibly sweet. The album Pinkerton from which this song was taken is actually loosely based on the Puccini opera Madame Butterfly.

Forming in high school, Japanese rock group Radwimps have become one of the country’s most loved bands. Thanks to their ability to craft catchy and accessible rock pop gems, they’ve maintained their spot atop the J-rock throne for over a decade now. Earlier this year they released the track ‘前前前世 (Zenzenzense)’ (translation: Past, Past, Past, Present) for the mega box office anime hit that was Your Name (in Japanese: : Kimi no Na wa). One of the biggest films to come out of the country in recent years, the soundtrack and this single has been attributed to the film’s success.

One of the country’s most prolific and groundbreaking artists Nujabes did a lot to pave the way for modern hip hop artists in Japan. Even post his untimely passing, his sounds still infiltrate the Japanese hip hop landscape. Melding jazz and US style hip hop beats, he connected what was happing in the rather isolated Japan with the rest of the musical world. In 2006 he crafted the soundtrack for the forward thinking anime Samurai Champloo, ‘Tsurugi No Mai’ a cut from this soundtrack is the ideal laid-back antidote to the hectic everyday hustle and bustle of modern city life.

With releases that are equal parts experimental and danceable, Kyoka is one of the country’s most interesting names when it comes to boundary pushing electronic music. Mixing electronic manipulation with organic field (everyday sound) recordings, the now Berlin based group blends Japanese ideology with modern sound art to craft something truly unique.

Arguably Japan’s biggest national and international hit, the 1961 hit ‘Sukiyaki’, known in Japanese as ‘Ue o Muite Arukou’, by Kyu Sakamoto is the story of a man who has to watch the sky while he walks to prevent his tears from falling. One of the most interesting aspects of the story is that in English ‘Sukiyaki’ is actually grilled meat and doesn’t have any connection to the song lyrics, however it was just easier to foreign audiences to say.

Over the years this track has becoming a staple for many Japanese and international house DJ sets. Thanks to its upbeat and super sweet, lyrics and a simple backing beat, the single has been remixed by producers across the world. Undeniably catchy, it’s pretty much impossible not to listen to on repeat.

Digging even deeper into the Japanese dance world, Dj Nori is as talented as he is enigmatic. His hectic but catchy 2014 dance floor killer ‘80’s Drugs’ is one of the most danceable gems to be released in the past 10 years. Combining New York influence and Tokyo energy he’s definitely one artist you should listen to if you want insight into Japan’s underground music scene.