Yasuzō Nojima On The Female Nude

Yasuzō Nojima is one of the most important figures in the history of modern Japanese photography. With an extensive focus on lighting, he captured unconventional nudes of ‘ordinary’ lower class Japanese women. With a career spanning five decades, he revolutionized the art of nude photo portraits. 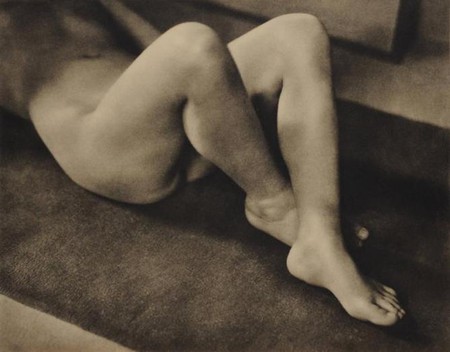 To best appreciate Japanese photographer Yasuzō Nojima one must understand his technique: ‘When I take a portrait I move the subject towards a point where the light is adequate. Then I evaluate the quality of the light, the shadows and forms. When I am satisfied, I shoot. I am not interested in capturing the personality of the model or in revealing her peculiarities. I shoot in tune with my perception of light and form: these are the elements that interest me’. Thus, writes Nojima, in 1927 during the early days of a photographic career which went on to evolve through the decades until his death in 1964. 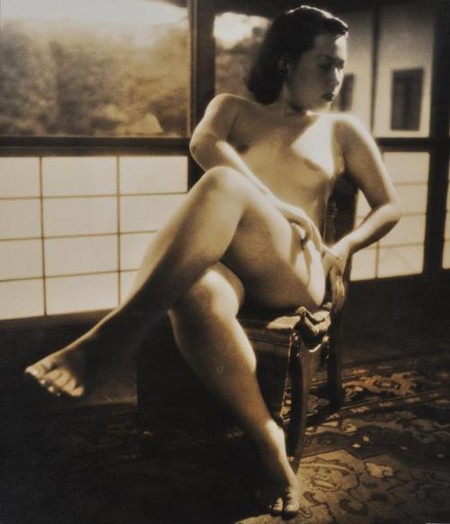 A Life for Art

Yasuzō Nojima was born into a wealthy family and developed an amateur passion for photography at an early age. He started taking photographs two years after he began studying at the Keio Gijiku University in Tokyo in 1906. At the age of 21, and after entering many photographic competitions, he was admitted to the prestigious Tokyo Photographic Study Group in 1907.

In 1920, he held his first solo exhibition at Misaka Photo Shop, a gallery he ran from 1915 to 1920 and the first of several spaces that he managed or owned during his lifetime.

From 1919 to 1920, he opened Kabutoya Gado gallery and worked with up-and-coming artists, especially those of the Shirakaba-ha (White Birch Group), a literary movement that included artists such as renowned painters Umehara Ryūzaburō and Kishida Ryūsei. He later opened the Nonomiya Photography Studio and then Nojima Tei, a photographic salon he established at his home in 1922. In 1928, he became a member of the Japan Photographic Society, a leading but somewhat conservative Art Photography club. Transitioning from pictorialism to New Photography in the late 1920s, Nojima met fellow photographer Nakayama Iwata with whom he established Koga (or Light Pictures), a short-lived but ground-breaking photographic magazine. Published from 1932 to 1933, Koga is now regarded as one of the most important records of the New Photography School in Japan. 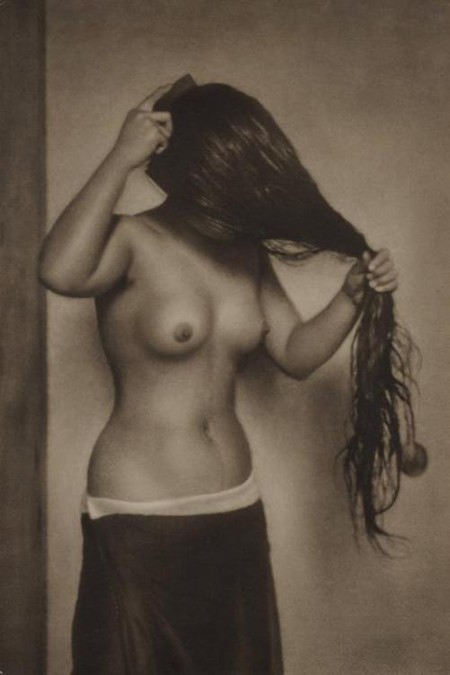 Nojima’s early photographic practice was charged with elements of kaiga shugi shashin (pictorial photography) or also referred to as Art Photography. Pictorialism was pioneered by Peter Henry Emerson, a British photographer in the 1880s, and was a movement that specialized in romantic, meditative shots of people and landscapes, and often applied pigments to prints or used other methods to give their images a more painterly quality. With the great number of Japanese artists travelling and studying in the West during the early 20th century, this romanticized photographic style reached Japan and remained the main trend until the early 1920s, long after it had passed out of fashion in Europe and the United States.

Nojima’s early works feature the characteristic density and heaviness of pictorialist styles, based in his subtle sensitivity and the pigment printing process, the mainstream printing method of that time. His work Muddy Sea (1910), depicting fishermen on the beach, is an example of his pictorial photography: a romantic landscape with heavy yellow hues veering towards orange, rendered with an almost impressionist, painterly appearance, the human figures mere silhouettes against the densely colored background. Woman Leaning on a Tree(1915) is an early example of Nojima’s fondness for ordinary subjects for his later iconic nudes and portraits. A woman, apparently a farmer’s wife, leans topless against a tree in a garden. The composition is still characterized by Nojima’s early pictorialist style, especially evident in the background. 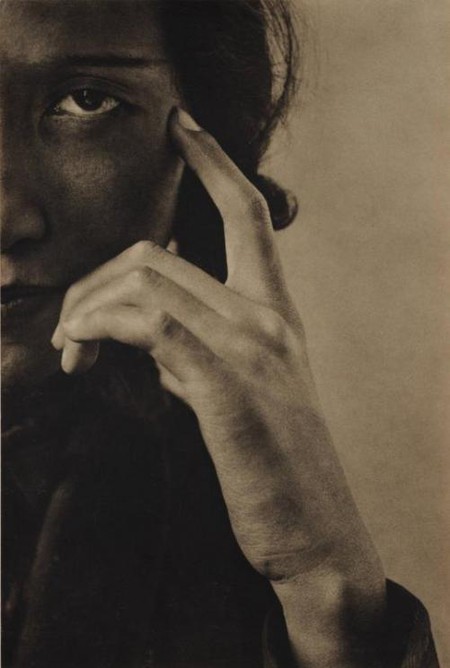 In the late 1920s and early 1930s, pictorialism lost favor to a new style of photography, the modernist New Photography movement. The rise of the latter stemmed from the influence of new German photographic trends. In 1931, an exhibition in Tokyo and Osaka, ‘Film und Foto’, displayed of over 1,100 works by leading European and American avant-garde artists and photographers, including figures such as Renger-Patzsch, Aleksandr Rodchenko and Edward Steichen. This exhibition was a source of inspiration and an encouragement to experiment for many Japanese photographers and artists of the time.

Nojima was among them and his early pictorialist style took a drastic turn towards New Photography in the early thirties. New Photography was a reaction against the romanticism, picturesqueness and sentimentality of Art Photography. The new movement advocated a focus on form and structure, emphasizing energy, motion, distortion and experimentation versus the dreamy lyricism of pictorialism.

New Photographers maintained that photographers should recognize the unique qualities of the medium and create works that could stand alone, without drawing direct inspiration from the fine arts. Pictorialism’s conventional conceptions of beauty should be left to the salons, picture postcards and hobby photographers.

Nojima’s work started to engage with ordinary subjects in isolated settings. His focus shifted on the subjects—whether raw portraits or nudes—with emphasis on the light and shadow. 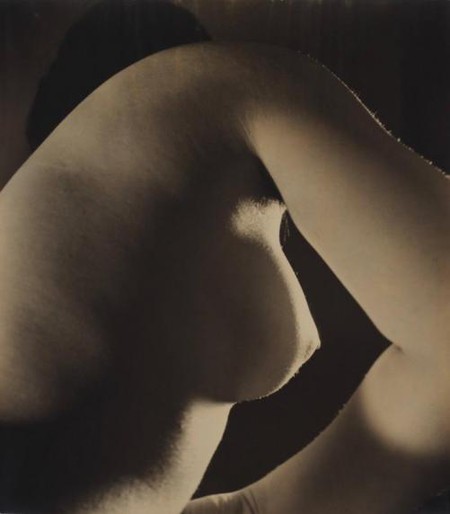 Shifting to New Photography, Nojima produced some of the most visually stunning and enigmatic portraits and nudes of ordinary people seen in Japanese pre- and post-WWII and photographic history. His works, although he never traveled outside of Asia, perfectly blended traditional Japanese aesthetics with western modernist approaches.

Portrait of a Fisherman (1930) shows how Nojima portrayed the oft-forgotten people of Japanese society, revealing their natural beauty and their humanity against the flattery of the typical mainstream Japanese photography of the time.

Nojima’s intensely personal portraits are exemplified by a variety of works such as his series of photographs of a woman called Model F and Miss M.(1931). One of his most accomplished and recognized early portraits is Miss Chikako Hosokawa (1932), capturing half a woman’s face, with a heavy play of light and shadow and a one-eyed direct, piercing gaze towards the camera.

Nojima became a master of the art of portraiture, not only of faces but of women’s bodies as well. His nudes are some of the most compelling works of the first half of the 20th century in nude photography. Continuing his use of ordinary subjects, such works often portrayed women’s bodies in subtle positions, their face hidden from view.

Yasuzō Nojima’s oeuvre is in the collection of the National Museum of Modern Art, Kyoto (Momak).