Why the World Cup Is Causing a Toilet Crisis in Japan 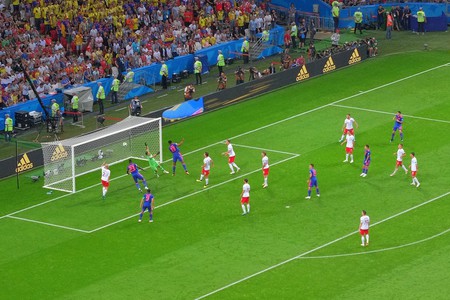 It seems that everyone has been glued to the real-life drama that is the 2018 Football World Cup in Russia. From big-name upsets to nail-bitingly close games, even those with a vague passing interest in the game seem to be enthralled, perhaps none more so than the people of Japan who have witnessed their home team scrape through some rather hair-raisingly close matches.

According to announcements made by the city’s waterworks bureau, however, not everyone is quite so thrilled about the nation’s World Cup successes, especially those working in Tokyo’s sewerage industry.

As reports claimed during Japan’s impressive 2-1 win over Colombia last week, Tokyo was under threat of being washed out when waves of nervous punters all made a synchronised mad dash to the toilet during the game’s half-time break.

Well done Japan!! You are now the best Asian team in the world! Japan defeats Colombia 2-1. This is the 1st ever win by an Asian Football Confederation (AFC) team over a South American (CONMEBOL) opponent at the #WorldCup (18th meeting). It is their first win on European soil. Well done 🇯🇵!!🙌🙏 #FIFAWC18 #Japan #SNsFootball #japanlover #japanworldcup #worldcupfootball #asianfootball #asianfootballconfederation

Celebratory beers, nervous tension and the fact that the match only has one major break meant that toilet usage jumped to a whopping 24% increase in the city, as the Japan Times reported. For a city of over nine million people, that’s a pretty heavy load for the city’s waterworks team to deal with.

This year is arguably the nation’s biggest year in terms of sports event viewership, with ratings hitting an annual high of 48.7%. The previous record-holding event was Yuzuru Hanyu’s Olympic gold figure skating performance in Korea, which saw 33.9% of the nation’s viewers glued to the screen.

It seems that witnessing their local hero Yuya Osako kick a second half goal straight to the back of the net was enough to trigger the bowels and bladders of the county once more, causing an additional 50% spike in water usage at the end of the match.

Luckily here in Tokyo, the city of the sewerage museum, the local waterworks crew know their flows and predicted this would be the case, so they adjusted the nation’s water pressures accordingly.

Japan is definitely not adverse to a little toilet talk, in fact it’s probably one of the most bathroom-obsessed nations in the world. Beyond the futuristic robot loos, the country has given birth to Unko Kanji Doriru (the Poop Kanji Teacher) – the poop-headed professor and textbook star who teaches children kanji.

Japan also has a good luck charm known as kin no unko, aka the ‘golden poo’, a small symbol of good fortune once so popular that, in 2006, around 2.7 million mobile phone charms resembling the poop had been sold.

Perhaps for the next match the hopeful football diehards should say a prayer to kawaya kami, the country’s official toilet god for good luck, both on the football field and in the hope the pipes deep below can survive tomorrow night when the nation takes on Poland.