In the peaceful rolling hills of Kisarazu City, Chiba, just a little over an hour from Tokyo, a pack of savage-looking robot wolves are roaming across the countryside and terrorizing gardens. Although they look like they emerged from a terrifying episode of ‘Black Mirror’, these snarling digital scare-wolves are serving a very valiant purpose. Known as ‘Super Monster Wolves’, these automated robo-creatures were created not to steal your children or haunt your dreams, but to protect the valuable crops of Kisarazu City.

After a rather tragic 1800s state-sponsored campaign to eradicate most of the nation’s wolf populations, wolves were no longer around to keep prey animal populations from overwhelming the environment. Without wolves to keep the local eco-system in check, wild deer and bore have been overrunning the country’s agricultural areas, making a mess of local farms and their produce, ruining innumerable amounts of the area’s chestnut and rice crops.

In an attempt to try and at least restore the balance a little, the robotic wolf was created to keep the local destructive wildlife at bay. With its motion sensor-activated wolf-like screams and less wolf-like head movements, it may be do the trick.

Rubbery features, wild hair and a permanent snarl stretched across their snouts, these robo-wolves honestly look a lot like a high-end Halloween prop, complete with glowing red eyes. However, these faux-wolves have just completed their trial period and, according to the Japan Agricultural Cooperative (via Chiba Nippo news), their introduction has proven to be a resounding success. They’ve been so successful in fact that they’re going into mass production next month. 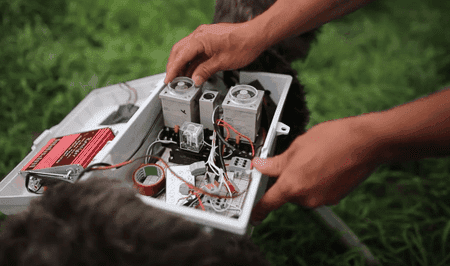 Standing at 65 centimeters (25.5 in) tall, running on re-chargeable solar batteries and with a radial effectiveness of just around one kilometer (.6 miles), these puppies don’t come cheap. They cost 514,000 yen ($4,800 USD/£3,400) each, but then again, you can’t really put a price on a farmer’s livelihood. For those who can’t take on the full investment at once, the company provides more affordable leasing options as well.

With more of these terrifying monsters on the loose, Japan’s farms hope to become safer by the day.