Who Is the Pen-Pineapple-Apple-Pen Pop Star? 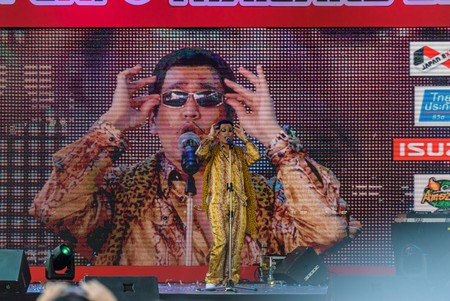 Pikotaro soared to number one on the Billboard Japan Hot 100 chart in 2016 with “PPAP (Pineapple-Pen-Apple-Pen),” launching the Japanese comedian’s career to new heights. With just a handful of wacky English lyrics, a taste for flamboyant fashion, and matching enthusiastic dance moves, Pikotaro created one of the catchiest viral tunes to come out of Japan.

The man behind Pikotaro

Pikotaro is the alternate ego of Daimaou Kosaka, which is the stage name of Kazuhito Kosaka, who was born in Aomori, Japan. He pursued comedy for years as part of the trio Sokonuke AIR-LINE, mostly performing skits, comedy acts and songs on television until they disbanded in 2005. Then 32, Kosaka decided to focus more on working behind the scenes, before returning to comedy in 2008. While he was successful enough to appear in commercials and even be chosen for Aomori’s tourism ambassador in 2015, nothing compared to the unexpected breakout success of “PPAP” in 2016.

Kosaka had already written the music for a bunch of songs he planned to fill out. He wrote the lyrics for “PPAP” at home while listening to the tune. He claims he really was inspired by an apple (coincidentally from his hometown of Aomori prefecture, the country’s largest producer of apples), along with an old can of pineapples left out and the pen he was using to write. But to perform it, Kosaka knew it wasn’t himself but rather Pikotaro who was the best man for the job. He uploaded “PPAP (Pineapple-Pen-Apple-Pen)” as the first song on his new YouTube channel. 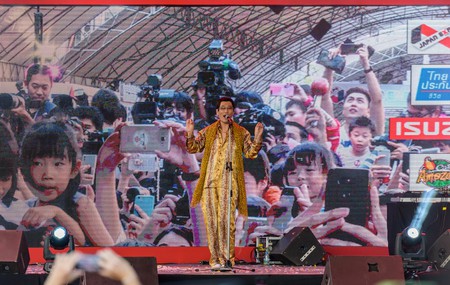 Kosaka had created his alternate character Pikotaro years ago to help him perform live comedy acts. Pikotaro is a completely different person from his human host. For one thing, he’s 10 years older, born in Chiba prefecture and enjoys listening to Mariah Carey and Stevie Wonder. The python- and leopard-print-loving singer, his exuberant dancing, and the song’s simple English lyrics had all the right qualities, and the “PPAP (Pineapple-Pen-Apple-Pen)” video went viral on YouTube shortly after its release in October 2016. The original video has over 126 million views, but the actual number is easily double that thanks to numerous versions.

Japan’s newly re-elected prime minister, Shinzo Abe, has invited Pikotaro to a dinner party with Trump during the American president’s official visit in November. Last year, Trump’s granddaughter Arabella released a video of herself singing Pikotaro’s hit “PAPP.” According to The Japan Times, Abe told Trump, during one of his visits to New York, that he enjoyed the video, which might have given him the idea to bring the two together.

Pikotaro intends to continue writing songs, but he doesn’t expect to ever compete with the inimitable “PPAP (Pen-Pineapple-Apple-Pen).”