Who is Doraemon, the Beloved Blue Cat From Japan? 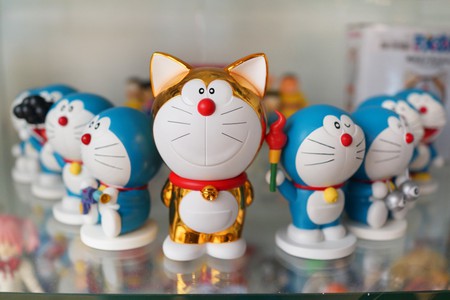 Figures of Doraemon on a store shelf | © TY Lim / Shutterstock

You see him everywhere in the Land of The Rising Sun, but who is he and why is he so popular?

So ubiquitous is Doraemon in his homeland that the question isn’t, ‘Where will I see him’? but rather, ‘Where will I not’? It is very hard to go even a few feet in Japan without spotting the trademark cyan-blue spherical head and big eyes peeking out at you from somewhere. In a nation positively awash with cute mascots, it is natural to wonder what is the story behind Doraemon’s creation, and just why do the Japanese love him so much?

Doraemon has been around for a very long time; next year, he notches up a staggering half-century in show business. When manga artists Hiroshi Fujimoto and Motoo Abiko – writing under the joint nom de plume Fujiko F. Fujio – debuted their creation in Japan in 1969, it’s unlikely they could have predicted the ways in which the country would clasp him so closely to its collective bosom.

The main narrative behind the manga concerns young Nobita Noby, a troubled soul whose life is plagued by depression, bullying and bad grades at school. His lot is not a happy one, but help is at hand thanks to a future descendant, who builds a robot to travel back in time and help Nobita help himself out of his ennui. Said automaton takes the form of a large blue cat with no ears, determined to deliver Nobita into a better future.

An instant hit on publication, its anime adaptation in the 1970s boosted the title’s popularity even further; so much so that he became a bona fide cultural icon. In 2005 the animated adventures of Doraemon ended with an incredible 1,787 episodes before a new version of the show went out that same year. Feature films starring the blue cat are always a hit at the Japanese box office, and there are an incredible 63 video games bearing his likeness as well. Take note, this is before we get to the mountainous piles of official merchandise.

There is a reason why Doraemon’s story has lived so long. Japan is a country where depression among young men is rife, and bullying at school is endemic. There are a very large number of readers who identify with Nobita in some capacity. The protagonist, unlike many such characters, is not born with any special gift or talent. He is simply one more little Japanese boy trying to make sense of his place in the world, but fate has greater plans for him than the ones he can envision. With the right help, he can step into his ‘true’ self and find fulfillment. Complementing this optimism is the story’s other main thematic thread: the use of technology as a force for good.

Techno-fear is a topic that looms large in manga and anime with depictions of technology as something that has the power to end worlds. This theme has been a constant in the mediums of Japanese entertainment, whether it’s Godzilla or Ghost In The Shell. Doraemon, however, turns the topic on its head – not only is the titular cat technologically beneficent, he also has a stunning array of gadgets and gizmos (all stored in a front pouch on his tummy, a seemingly infinite vortex he refers to as his ‘pocket’) with which to improve Nobita’s life. Crucially, he understands that he is part of something much bigger than himself and that it is his duty to help others and cultivate virtue, all key elements of Japan’s collectivist society. 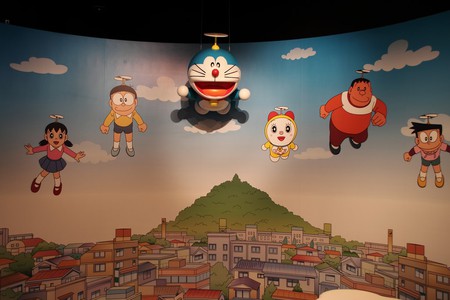 Doraemon and the team

When he was first brought to life, Doraemon was created for young children, but in the last five decades, he has taken on a far wider cultural significance. In Japanese print media, a reference to Doraemon’s pocket is shorthand for something which has the ability to satisfy any wish. He is also no stranger to charity work – TV Asahi used him to drum up funds to help victims of natural disasters, one of the many appeals he has been featured in. He and other characters from the manga also appear in educational material (the Doraemon guide to recognising kanji is a big seller). Let’s also not forget Toyota’s 2011 ad campaign with, of all people, French actor Jean Reno playing the helpful feline:

His most recent high-profile gig has involved being selected as the official Japanese ambassador for the 2020 Olympic Games in Japan, a fitting choice as Doraemon’s adventures are popular across Asia, Southeast Asia, Mexico, Europe, India, Pakistan and the Middle East. Viewers of the closing ceremony in Brazil in 2016 will remember Doraemon making a cameo in order to assist Prime Minister Shinzo Abe in the official handover. No doubt he’ll be making even more appearances in the run-up to the games.