Where You Should Go in Japan, Depending on the Time of Year You Go 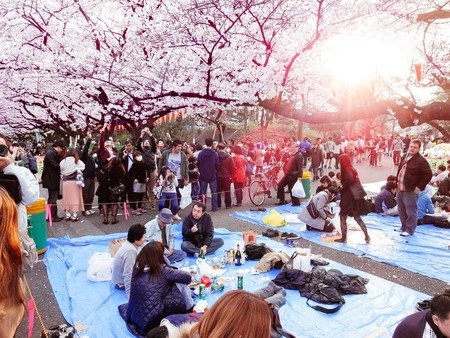 One thing that’s particularly special about Japan‘s landscape is that it completely transforms with each passing season. Though the stunning cherry blossom season is particularly famous, no matter what time of year you visit, you’ll be privy to some spectacular sights. Here’s everything you need to know.

Zao, Yamagata prefecture
For foreigners coming to Japan for winter sports, Niseko, Hakuba and Sapporo have typically been Japan’s main players. However, there are plenty more hidden snow-capped peaks worth checking out, and Mt Zao in Yamagata prefecture is just one of them. This volcanic mountain range towers over the border between Yamagata and Miyagi prefectures and offers some of the most incredible sightseeing, onsen soaking, and of course snow, that you’ll be able to find anywhere in the world. Thanks to it being a relatively well-kept secret by the locals, the town that surrounds the area remains stuck in time offering guests old world charm. It’s also home to a unique clan of ‘snow monsters’ which form on the tree-lined mountain peaks.

Naha, Okinawa prefecture
Given that it’s typically a ‘go-to’ for summer vacationers, Okinawa prefecture has a lot to offer during the cooler months too. Firstly you’ll be able to avoid the hordes of beach thirsty tourists. Don’t think for a second that by going to this tropical hotspot that you’ll be missing a ‘white Christmas’ though, as Hoshino Resort Risonare Kohamajima put on a very special illumination event during the Christmas months, creatively fashioning the white beach sand and abundant white coral into a stunning display. Cherry blossom season runs early in Okinawa too, kicking off in January, so when everyone else is battling the piles of wet snow, you could be picnicking under curtains of pink.

Hakone, Kanagawa prefecture
Located just an hour or so from Tokyo sits Hakone, one of Japan’s most magical cities. Hakone is famous for being a traditional onsen (hot spring) town with excellent views of Mt Fuji and some of the best and most authentic Japanese food you can find anywhere. If you make it to Tokyo during winter, a day trip to Hakone is definitely on the cards, as the snow sprinkled landscape completely transforms under winter’s mystical spell. Plus there’s no better way to enjoy a steaming hot outdoor onsen than being surrounded by powdery white landscapes.

"Mountains, according to the angle of view, the season, the time of day, the beholder's frame of mind, or any one thing, can effectively change their appearance. Thus, it is essential to recognize that we can never know more than one side, one small aspect of a mountain." #murakami #storiesofjapan . . #mtfuji #lakeashi #nature #beauty #wanderlust #travelgram #instagramjapan #japan_of_insta #japantravel #hakone #japan #landscape #fuji #富士山 #芦ノ湖 #箱根 #日本 #vscojapan #写真好きな人と繋がりたい #cooljapan #torii #hakoneshrine #鳥居 #景色 #夏 #natgeotravel #canon #mountains

Yoshino, Nara prefecture
If there’s one cherry blossom experience to rule them all, it’s going to be had at Mount Yoshinoyama, in Nara prefecture. Legend has it this is the birthplace of cherry blossoms in Japan. It’s said that the original trees were planted here around 1,300 years ago, and today over 30,000 trees span a cross-section of varieties covering the mountain slopes and peaks. During the months of March and April the town is awash with pink in celebration of the fleeting appearance of the blossoms, and many stores and food vendors sell exclusively seasonal produce.

Tokyo city
Tokyo is great to visit any time of year, but there really is something special about spring and the seasonal cheer it brings. April is when Tokyo celebrates the start of new beginnings and the city’s air is filled with the hope it brings. During March and April many people start new jobs and university leavers make their first foray into the business world. As cherry blossoms flourish throughout the city, there are countless places to lose yourself under waves of pink. Some spots worth visiting during this time of year are the stunning Meguro River which is curtained with flowers, and the popular mega parks like Yoyogi and Inokashira. Here you’ll be able the witness the some of the most impressive hanami parties (basically cherry blossom viewing parties) in the parks and watch Tokyo locals set up lavish picnic spreads. The whole season is a city wide public party.

Matsuyama, Ehime prefecture
A popular spot for locals but a little hidden for foreigners, Matsuyama city in Ehime prefecture is a secret tip for those wanting to explore a new and authentic city in Japan. Situated on Shikoku island, the smallest of Japan’s main islands, the city is home to Matsuyama Castle, one of the country’s remaining twelve ‘original castles’ which have survived the post-feudal era since 1868. Here during spring the soft pink blossoms transform castle’s ground, which is open to the public. On the weekends locals swam to the are which is accessed by chairlifts to enjoy stunning flowers while getting an incredible view of the city.

Shimoda, Shizuoka prefecture
There are a number of beaches within day trip distance from Tokyo, however they arguably don’t get more stunning than Shimoda beach located on Izu peninsula, just a few hours south of Tokyo. Originally a small fishing village, the area is dotted with scenic untouched beaches and coastline but is still a lot more low key than other beach areas in Japan. With crystal clear waters curtained by lush green mountain peaks, this tiny corner of the country is as much a photographer’s delight as it is a beach paradise.

Hiratsuka, Kanagawa prefecture
Though during the rest of the year it may not seem like much, summertime sees the small beach town of Hiratsuka come to life when it celebrates its famous Shonan Hiratsuka Tanabata Festival. During summer time the whole nation celebrates Tanabata (aka the star festival). It’s a celebration of the legend of the stars which sees streets filled with performances, food vendors and lots of dancing and drinking, and Hiratsuka’s is the Kanto area’s biggest. It runs for an entire weekend in July.

Kakamigahara, Gifu prefecture
If there’s anything more precious and fleeting in Japan than the cherry blossoms it’s the life of the humble firefly. Humid days and plenty of rainfall make for the perfect firefly conditions meaning that June and July is the ideal time to go. In Gifu prefecture there are a number of places you witness these mystical glowing balls of light as they surface for mating season. Kakamigahara’s Daiyasu Terakawa Firefly Festival sees around 10,000 visitors head to the area to catch a glimpse of the famous Genji fireflies and enjoy the festivities that surround the event.

Mt. Takao, Tokyo prefecture
Autumn season, known locally as ‘koyo’ almost gives spring a run for its money in terms of incredible natural beauty. As the trees around the country transition from green to golden shades of yellow and red there are an uncountable number of areas to explore across the country – however, you can’t miss Mt Takao located just an hour or so from Tokyo. During November this mountainous region welcomes visitors preparing to take the variety of hikes to the mountain’s peak from which you can see Mt Fuji in all its glory. From November 1-30, the city hosts weekend festivals which feature taiko drumming, Japanese orchestra performances, and traditional yosakoi dancing. It’s the prefect place for a weekend getaway or just a day trip from Tokyo.

Nikko, Tochigi prefecture
Koyo season really kicks off in mid September, as the ‘koyo front’ crawls southwards across the nation from the northern point of Hokkaido until it reaches the more central areas of the main Honshu island. Thanks to its elevation, Nikko has some of the longest koyo periods giving guests ample time to check out the season in all its glory. If you make it to Nikko, visit the popular Ryuzu waterfall and Lake Chuzenji where the bright orange hues contrast with the deep blue waters of the lake. Beyond natural beauty, this traditional area is filled with seasonal treats and the Toshogu shrine, the most lavishly decorated shrine in all of Japan.

Chichibu, Saitama prefecture
Another easy trek from Tokyo is Chichibu, in Saitama Prefecture, about 90 minutes from the city center. Through a typically sleepy pocket of Japan, Saitama comes to life during autumn as the mountains are awash with red and gold, making the area look just like a watercolour painting. Made your way straight to Chichibu-Tama Kai National Park to fully immerse yourself in the full golden koyo glory.