Where To Stay in Kyoto: A Guide to the City's Coolest Neighbourhoods 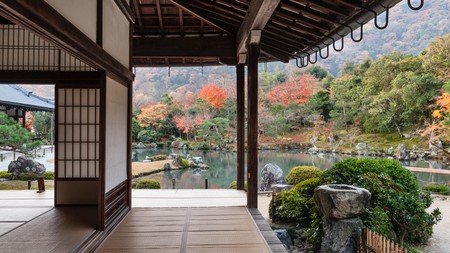 Not only is Kyoto picturesque and rich in history, but the city is also a lot more diverse than might be obvious at first, with each of its different neighbourhoods having their own unique character. Here are seven of the coolest areas to explore – and perhaps stay in – during your time in Kyoto.

Kyoto, Japan’s former imperial capital, is one of the country’s prettiest cities. It is home to thousands of courtly Buddhist temples and shrines, as well as lush forests, majestic mountains and adorable historical streets and alleys. It has a more contemporary side, too, with modern malls and plenty of cool museums, galleries, shops, cafés, bars and restaurants. Kyoto is also an easy city to navigate, and you can conveniently explore its different neighbourhoods on foot or by using the city’s efficient public transport. For a well-rounded view of Kyoto, check out these seven neighbourhoods that each present a different side of the city.

Most travellers come to Kyoto via train from Osaka or other cities in Japan, so Kyoto Station and its surroundings will be the first area that the majority of visitors see. In contrast to the image of Kyoto as a historical capital, Kyoto Station is a futuristic steel-and-glass landmark that’s connected to large, modern department stores including Isetan, and malls such as The Cube, which has an impressive selection of dining outlets. Nearby is Kyoto Tower – the city’s tallest building, which has a 360-degree observation deck from which you can survey the city below. Higashi-Hongan-ji, Nishi-Hongan-ji and Toji temples are all located within walking distance from the station, as are the Kyoto Railway Museum, the Ryukoku Museum, which showcases historical Buddhist art and artefacts, and the Costume Museum, where you can view historic garments once worn by Japanese nobles during the Heian period. 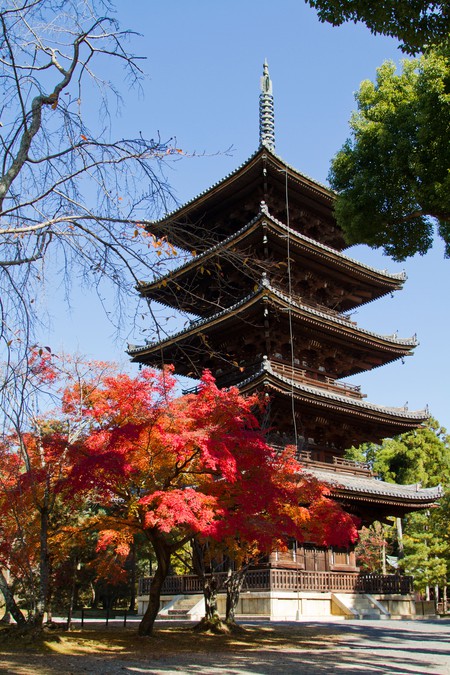 Nestled at the foot of the Arashiyama Mountains on Kyoto’s western edge, Arashiyama district is far enough removed from the activities of the city centre that it feels like a separate serene, rural town. Surrounded by nature, Arashiyama is a popular destination for travellers, who often come here to stroll through its ethereal Bamboo Grove or feed wild Japanese macaques at the Iwatayama Monkey Park. Arashiyama is also where you’ll find a number of calming spiritual spots such as the garden in Tenryu-ji Temple, where you can look out at gorgeous scenes of Mount Arashi and Mount Kame, and the mythical-looking moss-covered garden in Giou-ji Temple. Arashiyama is also a good place to try shojin ryori – Buddhist vegetarian cuisine – at establishments such as Shigetsu, where you can have a healthy and tasty meal that will also balance your mind, body and spirit. 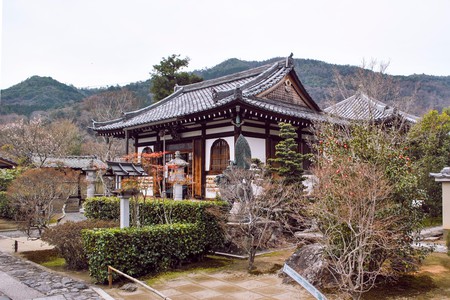 This bustling and modern part of Kyoto is packed with shops, restaurants and bars. Here you’ll find Nishiki Market – a 400-metre-long (1,312-foot-long) stretch of market that no culinary adventurer should miss. With more than 100 stalls selling everything from sashimi and skewered octopus heads to premium grilled steaks and crêpes, Nishiki is a great place to sample street snacks and purchase local spices and pickles as souvenirs. Nearby, the food basements of Japanese supermarkets Daimaru and Takashimaya offer even more options for food, with pre-prepared food available alongside fresh produce, Japanese sweets and more. Travellers looking for a little retail therapy will enjoy Teramachi Kyogoku and Shinkyogoku shopping arcades – two streets with everything from independent fashion boutiques and gift shops to bookstores and art galleries. At night, head to Ponto-cho Alley – a historic street along the west bank of the Kamo River that comes to life with dozens of bars, restaurants and clubs. 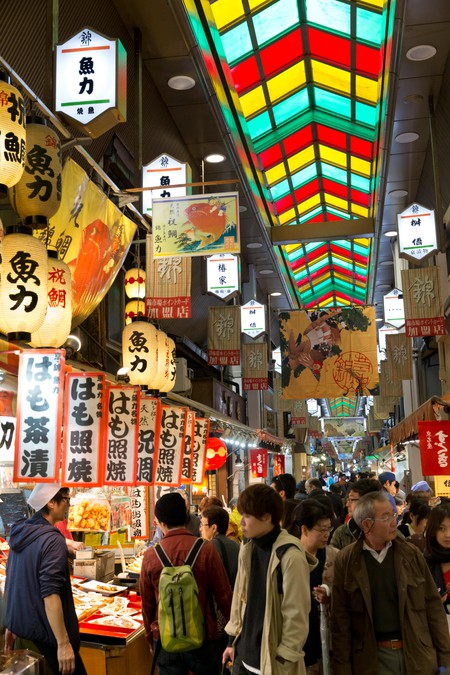 Higashiyama is a part of the city that best evokes the spirit of ancient Japan. One of Kyoto’s most well-preserved districts, Higashiyama’s labyrinth of alleyways are lined with charming machiyas – traditional Japanese houses – and the area is where you’ll find some of the city’s most beautiful temples, such as Sanjusangen-do, with its 1,001 statues of Kannon – the goddess of mercy – and Kiyomizu-dera, a hilltop UNESCO World Heritage landmark that looks out over the city. There are also many small pottery, pickle, kimono and snack shops in this district – one pottery shop that’s particularly worth visiting is Pottery Shop Toutensei Kawasaki, which makes pretty tea and sake sets. At the northwestern end of Higashiyama is Gion, one of Kyoto’s most famous streets. Developed during the Sengoku period, which lasted from around 1457 to 1615, Gion was best known as the home of the geisha. These Japanese female entertainers, who perform traditional songs and dances, can be recognised by their kimonos and white-powdered faces. While there are fewer geishas in Gion today than before, you might still spot a number of them walking along on this charming street. 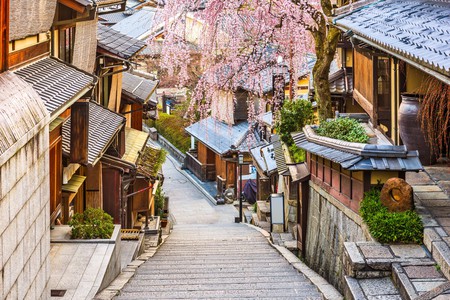 Stretching from the far north of Higashiyama up into the mountains, Sakyo – which is where Kyoto University is located – is known as the city’s enclave of creatives and intellectuals. It’s also a good place for contemplative walks or more challenging hikes, and one of the main attractions here is The Philosopher’s Walk. Known in Japanese as tetsugaku-no-michi, which means “path of philosophy”, this roughly two-kilometre (1.2-mile) path follows the scenic Shishigatanai Canal from Nanzen-ji Temple in the south to Ginkaku-ji Temple in the north. The path was given its name because Nishida Kitaro, an influential 20th-century Japanese philosopher, once walked the path regularly while engaging in daily meditation. Just behind Ginkaku-ji Temple, is Mount Daimonji, where you can embark on a short hike to enjoy stunning views of the city from the hillside. For a more vigorous hike, there is the 848-metre-high (2,782-foot-high) Mount Hiei where the UNESCO-listed temple complex Enryakuji is situated. 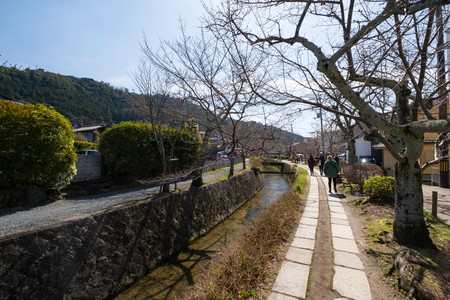 Much more peaceful and less touristy than many of the other parts of the city, Northwest Kyoto encompasses a large area north of Imadegawa-dori and west of Senbon-dori. This is where you’ll find Kinkaku-ji Temple with its dazzling golden pavilion, and Daitoku-ji Temple, which has a number of tranquil Zen gardens. In the same area, you can sample freshly baked aburi mochi – grilled glutinous rice cake snacks – at a teahouse near Imamiya Shrine. If you’re up for a workout, hike up Kyoto’s tallest mountain, the 924-metre-high (3,032-foot-high) Mount Atago. In this part of Kyoto prefecture, there are also several bucolic rural towns such as Kibune and Kurama that are worth visiting, especially if you want to escape from urban life and be surrounded by green forests. 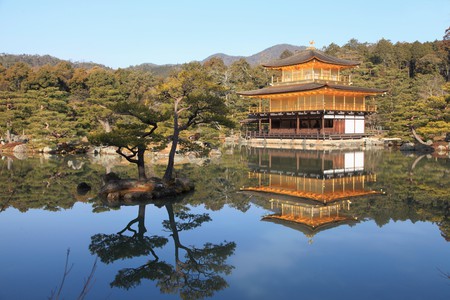 Encompassing Kyoto’s Yamashina Ward, Fushimi Ward and Minami Ward into Yawata City, the area known as Southern Kyoto is much larger and less densely built-up than the more central neighbourhoods. Most visitors to Southern Kyoto come here to visit the famous Fushimi Inari Taisha – a large Shinto shrine complex that is recognisable for its vermilion torii gates and fox statues. To the north of Fushimi Inari is Tofukuji Temple, a popular spot for viewing the changing colours of the trees in autumn. To the south of Fushimi Ward is an area that’s well-known for sake-brewing and where you’ll find some of Japan’s leading sake breweries Gekkeikan, Aburacho, and Fushimi Yume Hyakushu. 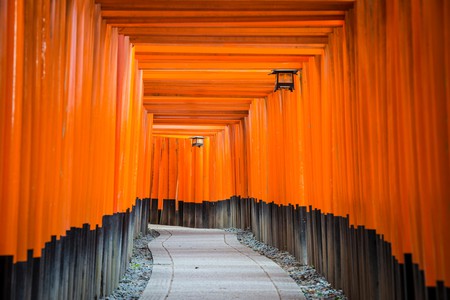 This article is an updated version of a story originally created by John Asano.