Where to Sleep in Japan for Cheap 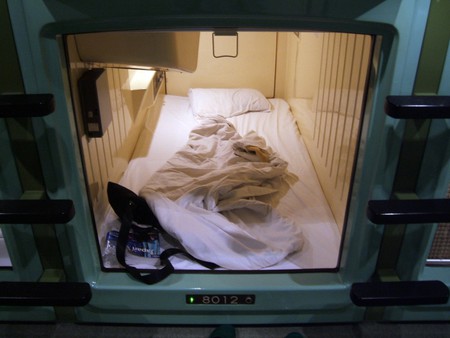 Travelling can be tiring, and travelling through a nation as bustling and hectic as Japan can be especially exhausting, so having a place to crash is vital. If you’re travelling on a budget there are plenty of options to get a little shut-eye for cheap, here are just a handful of choices.

Let’s begin with the most universally recognised budget sleeping option, the hostel. Compared to some other more budget friendly nations, the hostel community is not as vibrant in Japan. This could be due to a number of factors including that there are so many various sleeping options here and that communal living isn’t commonplace in Japan generally.

However there are options out there for you, if you’re planning in staying in central locations throughout the country look at the Khaosan chain which offers reasonably priced rooms and very clean and modern amenities, as well as a number of dorm options.

Guesthouses are definitely gaining momentum in terms of popularity, and when you see the level of design and amenities it’s clear why. As a basic explanation, here guesthouses are typically a little smaller than hostels and cater to a crowd of much more varying ages. It’s kind of like an upmarket hostel. There are two major players in the guesthouse game that you can’t bypass if you’re passing through: K’s House and NUI. Both uniquely different but with their own level of charm, K’s house has a number of locations, including a building in Ito which is actually a refurbished ryokan.

. ジメジメした梅雨も終わり、晴れの日が続いています。こんな日はNui.オリジナルカラーのTokyo bikeさんの自転車にのってサイクリングはいかがですか？（宿泊者のみ） スタッフお勧めのルートもございますので、お気軽に！ The rainy days are finally over and the sun is shining bright all week, why don't you rent a @tokyobike_jp from us and go for a ride around Tokyo? Please ask our reception staff for recommended cycling routes! . . . #nuihostel #nui #guesthouse #backpackerlife #cyclinglife #tokyobike #bikelife #tokyo #kuramae #asakusa #cycling #bikestagram #浅草 #東京 #蔵前

If you want to properly rough it, there are a number of free and cheap camping options in Japan. From Hokkaido to Hiroshima, if you have a tent and an intrepid heart, camping Japan is a great way to save money and see the country. For just a few hundred yen (a few dollars US) many parks and towns offer naturally stunning outdoor options. The Japan Tourism Board have put together a very handy PDF guide for everything you need to know. Do your research though because winter here gets mighty cold!

A no-brainer, but Airbnb was technically not legal in Japan until earlier this year. In March homeowners were give the green light to rent out their spaces for a maximum of 180 days per year. Though it still sits in a bit of a grey area, Airbnb listing are ubiquitous in all the major cities, and they’re generally more affordable than hotel options. If you plan on staying in Tokyo the best way to cut costs is to live in a more residential, but well connected area like Nakano or Shimokitazawa.

I love scouring vintage clothes shops (used shops)in Shimo-Kitazawa, Harajuku.👞🚪 You can even get a brand-name clothes at a cheaper price. I also sell my clothes I don't wear anymore. I think It's one of the win-win situations🕯 good find. tokyo#japantrip#japan#tourguide#guidoltokyo#GUIDOL#tripjapan#sightseeing##instagood#instalike#instadaily#instagramjapan#love#japanesestyle#vintage#fashion#shimokitazawa#harajuku#clothes#usedshop#good#vintagefinds

If you’re chasing full cultural immersion, why not consider homestay? Generally this option is for those staying in the country for an extended period of time. Homestay may seem like something you would have done while in high school, however there are a number of options like Homestay Web that are not at all age dependent.

The emergency option for those who have missed the last train home. Manga cafes are a very affordable option for a night or two, but honestly you probably don’t want to rely on it as your home base. Manga cafes are private booths that vary in amenities, but generally they offer a lounging chair (that can be used as a bed), internet, manga and if you’re lucky a drinks station and communal shower. Generally used as a temporary form of accommodation, they’re an experience but not for the people shy.

General price: Depends on your trip.

Shinkansen (bullet train) tickets can be notoriously expensive, so for those travelling on a budget here in Japan, overnight buses are a very viable option. Often a lot cheaper than their rail counterparts, the country is covered with a vast network of overnight bus routes and companies, but with 72 different highway bus routes Willer Express is the most famous. You won’t have the best night’s sleep but you will have saved on both transport and accommodation, so chalk that up to a win.

Probably these days more of a mythical ‘weird Japan’ legend than a commonly used accommodation option, but they exist. If you’re happy to trade monetary savings for space you can always consider the humble capsule hotel. Stocked with tiny pod style rooms, most major city centres will have a collection of hotel options on offer. Like the manga café, it’s a novel and affordable option, but probably not a healthy long term possibility.

If there’s one sleeping option that’s more infamous than the capsule hotel or the manga café it’s got to be the endlessly fascinating love hotels. Mainly used by those who still live at home or have met a nice friend while out at on the town, love hotels are rentable by the hour, and their amenities and interiors are as varied as the couples that rent them. Though probably not affordable for a long term stay, if you’re getting desperate for a quick shut eye and just need a powernap, maybe they’re worth considering?