Where To Eat in Miyajima: The Best Restaurants and Cafés in Itsukushima 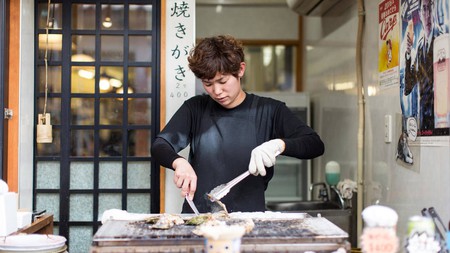 Freshly caught oysters, eel and sweet Momiji-manju sponge cakes dominate the restaurants and shops of Miyajima, but venture off the main shopping streets and you’ll find tiny side streets serving a range of cuisine to suit all palates, including tempura and okonomiyaki, handmade cakes and even Italian dishes. 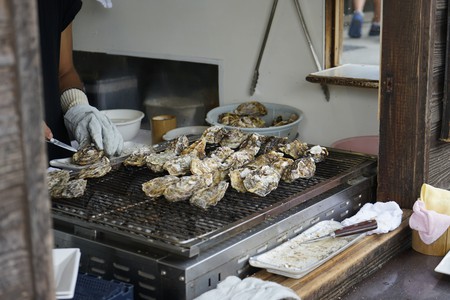 For a small island, Miyajima (which means ‘shrine island’, although its official name is Itsukushima) has a high concentration of restaurants and cafés to accommodate the growing number of people who flock to the island daily to visit Itsukushima Shrine. Other than a single branch of Starbucks, you’ll find the restaurants here are mostly independently operated, and the chefs often double as owners, who will both prepare and serve your food. It’s also worth noting that most visitors come to Miyajima for the day only, so many businesses close up at around 5pm, leaving just a handful of restaurants open during the evening. Many of the shops that line the streets of Miyajima are stacked with gift boxes of Momiji-manju for visitors to purchase as souvenirs – these maple-leaf shaped sponge cakes come with sweet fillings such as red bean paste, custard and chocolate. 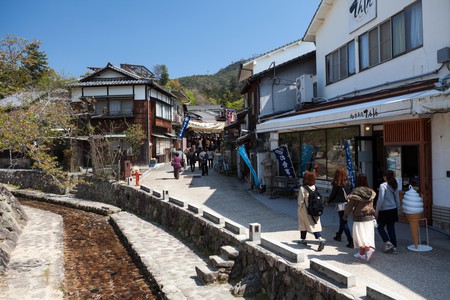 Miyajima’s fresh seafood, especially the island’s oysters and eel, are famous throughout Japan, so you’ll find many restaurants on the island offering these items; however, there are meat dishes and vegetarian options available in many restaurants, too. For more details, check out our guide to the best restaurants in Miyajima.

A giant cardboard raccoon posing outside the restaurant’s entrance welcomes diners to Mametanuki, which is situated on the main street between the ferry terminal and Itsukushima Shrine. One of the few restaurants on the island that doesn’t shut down at 5pm (it’s open until 9.30pm), Mametanuki is a traditional Japanese restaurant serving up the local specialities of anago (sea eel) and kaki (oysters), along with wagyu beef for non-seafood eating diners, and Japanese staples such as gyoza and ramen. A lighter izakaya-style menu offers small dishes such as meat skewers and Japanese-style spare ribs. The restaurant’s dark-wood interior is decorated with ornamental tanuki (raccoons), observing diners as they relax with a beer at the end of a long day of sightseeing. Expect to pay around ¥2,000 (£15) per person for dinner, excluding drinks.

Character-based goods and merchandise are big business in Japan, and there are plenty of character-themed cafés to be found in the big cities, from Snoopy to the Moomins. In Miyajima, you can visit one of two official Rilakkuma-themed cafés. One of Japan’s most popular characters, Rilakkuma is a cute cuddly bear whose image can be found on merchandise and stationery throughout the country. At the Rilakkuma café, expect lots of kawaii (cute) food such as the Rilakkuma curry, in which rice is shaped to look like the bear’s face, or desserts featuring bear-shaped pancakes and marshmallows. Of course, there’s also the obligatory gift shop to exit through after your meal, where you can purchase Rilakkuma souvenirs that include jars of organic honey and jams, rice crackers, stationery and homeware.

Miyajima’s only craft beer brewery and restaurant is located down one of the side streets just a couple of minutes’ walk from the floating torii gate of Itsukushima Shrine. Although you can visit just to try the beer flights (¥1,000 (£7.50)), it’s also worth visiting Miyajima Brewery’s restaurant, which is in a tranquil spot with sea views away from the crowds, where you can eat lunch while jazz music plays quietly in the background. The menu is slightly higher in price than other restaurants in the area but is extensive and has a range of dishes based on local specialities such as eel and oyster, plus Western-style options including grilled meats and pasta.

Hiroshima prefecture is the okonomiyaki capital of Japan and is home to more than 1,600 okonomiyaki restaurants, with a handful dotted around the island of Miyajima. Kishibe is a small, friendly establishment situated on Machiya Street serving up reasonably priced, delicious savoury pancakes from just ¥700 (£5). The restaurant’s tiny interior consists of a single counter seating up to 12 people, placing diners in full view of the giant griddle where the female chefs prepare your meal in a home-cooking style environment. Choose from toppings such as green onion, shrimp or cheese, or opt for the traditional Hiroshima nikutama, consisting of pork and egg.

Café Lente is a stylish restaurant and café that comes with some of the best views of the floating torii gate, and serves lunch sets including meat curries and vegan risottos at very reasonable prices. Open daily from 11am until 4pm, this quiet, airy café is also a good spot to relax – sink into the mishmashed furniture while enjoying a glass of organic wine or coffee. Expect to pay around ¥800 (£6) for lunch and ¥500 (£3.80) for coffee.

Kakiya is one of Miyajima’s most popular seafood restaurants, specialising in fresh oysters caught locally, which are hand-selected before being either baked, boiled or fried, and served in simple dishes with minimal seasoning. The restaurant is situated around halfway along Miyajima’s main shopping street and also houses an extensive wine cellar containing around 3,000 bottles of wine for meal pairings, many of which can be ordered by the glass. The recommended dish is the Kakiya set, combining the restaurant’s greatest hits in a single meal, with oysters served 10 different ways, from deep-fried to oyster soup.

A coffee shop and roastery operating out of a converted warehouse that dates back to the early 1900s, Sarasvati serves coffee and cakes handmade daily by the shop’s staff. Open from 8.30am until 7pm, cake and coffee sets are priced at under ¥1,000 (£7.50) each, and the selection of cakes includes cheesecake, chocolate cake, apple cake and a green tea-flavoured chiffon cake. The café provides a cosy atmosphere, with seating split over two floors that are furnished with shabby chic-style chairs and tables. A limited lunch menu is also available with dishes including spaghetti with beef and oysters and sandwich sets.

A contemporary, upscale Japanese restaurant run by a single chef specialising in tempura dishes, Tempura Tsukunejima is located between Miyajima Aquarium and Itsukushima Shrine. The traditional restaurant interior comprises counter seating and floor cushions placed on tatami mats in front of floor-to-ceiling windows, so you’ll need to remove your shoes if seated here. The simple menu consists of a selection of crispy, light golden-coloured tempura such as vegetables and shrimp served with rice in a classic Japanese dish known as tendon. Expect to pay around ¥1,500 (£11) per meal per person.

Run by a Japanese couple, Tamukaima is a traditional Japanese dessert café specialising in kakigori – shaved ice flavoured with syrup. There are also plenty of handmade cakes to choose from, including a sweet potato cheesecake and vegan-friendly options. Coffee and cake sets start from around ¥1,000 (£7.50) each. Wooden sculptures carved by the café’s owner complement the all-wood interior, and framed prints hanging on the walls create the atmosphere of an artist’s residence. Located a four-minute walk from Itsukushima Shrine, Tamukaima is open from 11am until 6pm and is closed on Tuesdays and Wednesdays.