What Is Mono No Aware, the Japanese Love for Impermanence?

Often considered to be untranslatable, mono no aware refers to the bittersweet realization of the ephemeral nature of all things. It is the awareness that everything in existence is temporary. The fleetingness of youth, the fading of romance, and the changing of seasons are not to be mourned, but cherished and appreciated in their impermanence, for that is where their beauty comes from. It is also a really lame tattoo idea, so please resist the urge.

Mono no aware translates literally to “the pathos of things”. In addition to pathos, aware can also be translated as sorrow, misery, or sensitivity, while mono refers to “things”. While there is a sense of melancholy associated with mono no aware, it is not meant to be a general sadness, but rather a deeply felt emotion that washes over the feeler as he or she realizes that everything is transient and of its own time and place. It has also been referred to as the “ahhh-ness” of life.

The concept of mono no aware originated during Japan’s strongly Buddhist-influenced Heian era (794 – 1185) and was used in the literature of the time. However, it wasn’t until the 18th century when famed scholar Motoori Norinaga applied his understanding of mono no aware to his criticisms of seminal works in Japanese literature, namely The Tale of Genji; through his lectures and literary criticisms, the term spread throughout Japan and eventually became ingrained in Japanese culture and tradition. 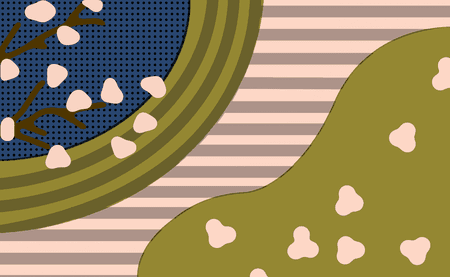 References to nature as an example of mono no aware can be seen frequently in literary and artistic works in Japan, perhaps most notably regarding sakura, or cherry blossoms. Celebrated for their beauty as well as signifying the arrival of spring, the delicate cherry blossoms are only in bloom for about two weeks out of the year. Other commonly used symbols include autumn leaves, the sun and the moon, animals, and seasonal flowers.

Mono no aware is still alive and well in Japanese film and literature. A number of manga and anime artists use the concept to drive storytelling and convey the passage of time. British-Japanese novelist Kazuo Ishiguro, author of best-sellers “Never Let Me Go” and “The Remains of the Day”, is known for contrasting past and present events in a way that is reflective of mono no aware.