What Do Sumo Wrestlers Eat? 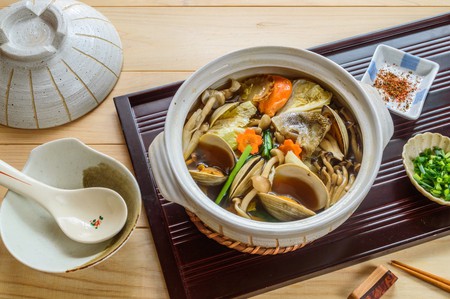 The old idiom is: “The bigger they are, the harder they fall.” That is, if you can actually knock them over. Toppling your opponent is the goal in sumo and, the bigger the opposition, the more difficult it is to drop him or her to the mat.

Since size and strength are such integral parts of the sport, it’s no surprise sumo wrestlers, known as rikishi, make it a goal to bulk up for competitions. Sumo wrestlers rely on a healthy, balanced diet in order to succeed in the training stables and at competitions.

“In other sports people rely on a lot of protein powders, but I never take supplements,” four-time sumo World Champion Byambajav Ulambayar told GQ. “So I build up my body with a healthy diet and fundamental sumo practice.”

Chankonabe (also spelled chanko nabe and chanko-nabe) is the main food consumed by sumo wrestlers. This hearty strew provides rikishi with a myriad of proteins, vitamins, and nutrients necessary for their training and weight gain.

There is no set recipe for chankonabe, outside of the main ingredients of proteins (chicken, beef, fish or tofu), vegetables (cabbage, potatoes, mushrooms, bok choy and radishes), and broth. The stew’s ingredients depend on the sumo stable, the cook, and personal preference.

Contrary to popular belief, sumo wrestlers don’t sit around eating all day, every day. Rikishi generally have two meals per day—a main meal at noon and an evening meal.

Breakfast may be the most important meal of the day to some, but rikishi are busy with chores around the stable and hours of practice sessions before their first meal. Plus, imagine slamming your body into another body repeatedly on a full stomach—that’s got bad news written all over it!

Following the large mid-day meal, which is conducted in a formal manner (as rikishi are served via rank), the sumo wrestlers take a long, well-deserved nap. Not only do their bodies need a rest from all of the grueling physical beatings they took during morning practice, but consuming large amounts of food makes the wrestlers tired. Taking a nap after eating is also beneficial as the body is more likely to store fat in this state.

The rikishi wake up and eat again, though not as much as they did at lunch.

A sumo wrestler’s diet is traditionally around 4,000 calories per day.