Weird Jobs That You'll Only Find in Japan 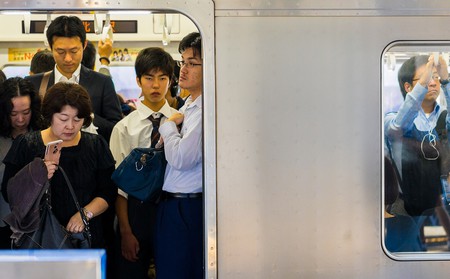 Japan is a nation with one of the lowest unemployment rates in the world, and some of the longest working days. With a population so large and a workforce so highly employed, there are some creative jobs out there, from professional apology maker to handsome weeping boys – here are some of the more interesting ones.

A man by the name of Mitsuyasu Uchibori is the nation’s number one authority on all things vinegar, and this reputation has garnered him the title of ‘Japan’s first vinegar sommelier’, or ‘summelier’ if you want to be clever, as the Japanese word for vinegar is su. So how do you become a summelier? Well, the qualifications aren’t that easy to get, as Uchibori’s family has been making vinegar in Gifu Prefecture for over 130 years, so you basically have to be born into it. Sorry.

In September last year, we wrote a story on the fascinating man Kotani Makoto, a homeless Japanese man who’s carved out a pretty nice life for himself by renting himself out to strangers for 50 yen (less than 50 US cents) per day. The entrepreneurial character started his career as a comedian, but after failing pretty badly on the stand-up circuit he found himself sleeping on a friend’s couch. After basically getting kicked out by his buddy (thanks to his messy ways), he started up his own self-rental website. Thanks to his infectious energy and magnetic personality, he now has a steady stream of fans and admirers will to pay for his time, take him on trips, and treat him to dinner.

This one is pretty out there: handsome boys get paid to spend time with their clients and help them work through their emotions by wiping away their tears. Known in Japanese as Ikemeso Danshi, this job is strictly non-sexual; it’s all about emotional support, kind of like an unqualified counselor perhaps, but with perfect hair. It’s reported that these guys can make around 8,000 yen (US$75) per hour, but the job is probably pretty unstable, financially and emotionally.

You’ve probably seen these guys on a few viral videos floating around social media sites, showing that no matter where you’re from, your peak hour train commute couldn’t be much worse than it is here in Japan. Known in Japanese as oshiya, or ‘pushers’, they’re paid to literally shove people into the carriages. Typically the workers are part-time workers, maybe students, or other station staff. Since the 2000s, many of these workers have probably had to go on and seek out other jobs, as many of the nation’s trains are a lot less crowded than in the past, thanks to their impeccable punctuality.

Struggling to get out of bed every morning for work? Then perhaps it’s worth considering moving to Japan to try and kick start a career as a professional cuddler. Hanging out in bed all day sounds pretty sweet, the only catch is that you’ll have to share it with a stranger. A professional cuddler’s services include simply offering a little spooning and a sympathetic ear, and maybe the occasional back-rub. But that’s it. It’s said that his market has popped up in the wake of the nation’s hikikomori (introverted/lonely) lifestyle that’s a culmination of a number of factors including hectic work schedules and heavy societal pressure placed on people once they get married.

For some, apologising isn’t easy; for others, saying sorry is second nature, a verbal tick set off by any act of inconvenience. If you fall into the latter group, then here’s a job for you: professional apologiser. The company Shazaiya Aiga Pro Agency offers an apology service, which the wrongdoer can use to send a formal apology on their behalf. The service costs 10,000 yen (roughly US$95) for a phone or email apology, and 24,000 yen (US$225) for a face-to-face apology package – not cheap.