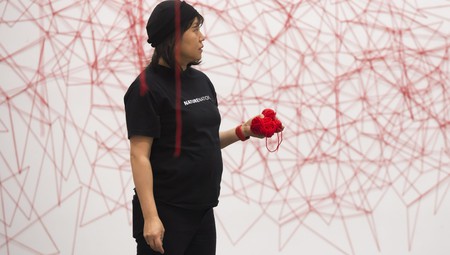 In the work of Japanese artist Chiharu Shiota, the spiritual and the sublime converge with the everyday. Here, we take a look at an artist who captures the poetic beauty of loss and memory in entrancing and immersive installations.

During the Berlin Biennale in 2016, Shiota’s installation at Blain Southern gallery, Uncertain Journey, was a social media sensation. Everyone and anyone was Instagramming themselves against the backdrop of the work’s red thread that was emerging from iron framed boats and seemingly devouring the gallery space.

The monumental site-specific installation was her first exhibition in her home city for eight years. The complex network of blood-red yarn symbolised the neural connections of the brain, the internal workings of our psyche, and considered existential questions. It perfectly encapsulates how the artist paints emotion in a 3D sphere. 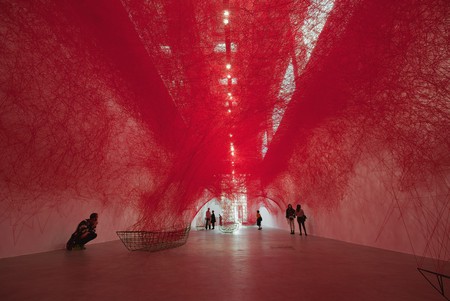 Initially studying painting at Seika University in Kyoto, Shiota began to explore the possibilities of painting beyond the canvas while on an exchange residency at Canberra School of Art, Australia. She presented her first performance, Becoming Painting (1996) in which she used her body as the canvas vehicle, splattering herself with red, toxic paint. 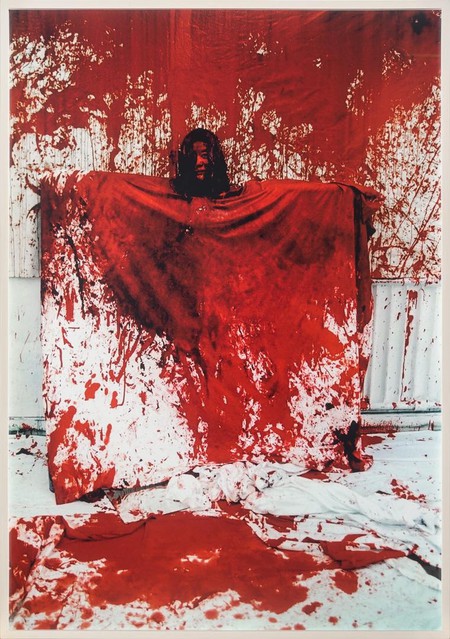 In 1996 she moved to Germany to study under Polish artist Magdalena Abakanowicz, but got her name confused and actually ended up being taught by Marina Abramović – a fortuitous mistake that no doubt benefited Shiota greatly in learning about using her own body as a medium, as well as the power of restriction and limitation.

She is currently showing a video of an early performance piece at the Jakarta Biennale 2017 in which she sits in a narrow bath and pours mud over herself. Bathroom (1999) is an important work as it reveals the significance of Butoh, an avant-garde form of Japanese dance theatre that embraces primitive expression and the absurd, on Shiota’s early practice.

Shiota started to remove herself physically from her work, realising she could still be present in an absence. She soon started to gain international attention, specifically at the Yokohama Triennale in 2001 where she presented her impactful installation Memory of Skin (2001). Five enormous dresses, permanently mud-stained, were persistently washed by streaming water from shower heads in a vain attempt to get them clean. Here, most evocatively Shiota explores how existence, although transient, is forever retained in memory, permanent indelible marks never to be gotten rid of. 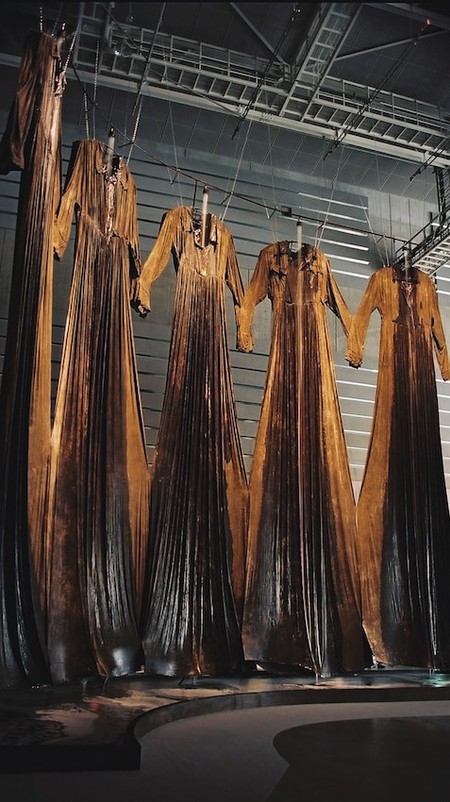 With this transition in her work, she began to utilise everyday objects that held symbolic connotations – from dresses and shoes to metal bed frames, chairs and suitcases – all functional items that are loaded with cultural and personal significance. We use clothes both as a form of identity and an extension of our persona, but also to cover up and hide our skin. Shoes denote a specific group within society; not everyone can afford to buy them and not every culture wear them, but they also aid us to achieve goals and make journeys.

Shiota’s employment of these objects in her work enables her to transpose their functional aspect as representations of our metaphysical existence. Their inclusion in isolation within her various installations, saturates the work, just as the yarn does physically, with potent symbolism. 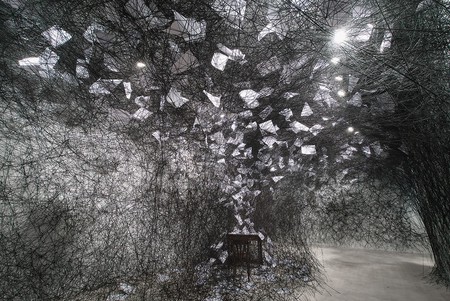 In 2015, Shiota represented Japan at the 56th Venice Biennale. Her installation, The Key in the Hand, utilised 400 km of red yarn – synonymous with Shiota’s practice – as well as 180,000 keys and two boats. The work consumed the space, so upon entering the gallery, visitors were confronted by a mass of interweaved threads above their heads from which the keys hung.

We use keys for a variety of reasons; they keep possessions safe but are also objects most people engage with on a daily basis. Therefore,they are imbued with countless interactions, and subsequently memories and feelings. As the keys seem to fall from the ceiling, the two boats rose, as if like two hands, to capture the rain of memories. 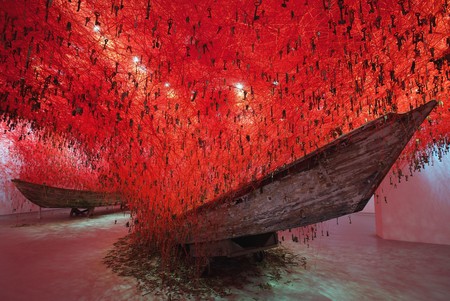 Her work lends it self to the dramatic, and Shiota has been commissioned by various opera and theatre productions to create set designs and provide artistic direction, most recently working on Shakespeare’s, The Winter’s Tale (2016) and Wagner’s Siegfried (2017) for Theater Kiel. The graphic and minimal element of her installations can be interpreted in a stage context, activating the audience’s imagination.

Using monochromatic colour, predominantly black or red and now most recently white, Shiota is also able to focus the viewer’s attention, removing any other distraction or clutter. These are colours of voids, the abyss and the unknown, but also exceptionally symbolic of bodily life force (red), calmness (white) and the universe (black). This concentration of symbolism with the incorporation of actual everyday objects only intensifies the work in all its ethereal glory. 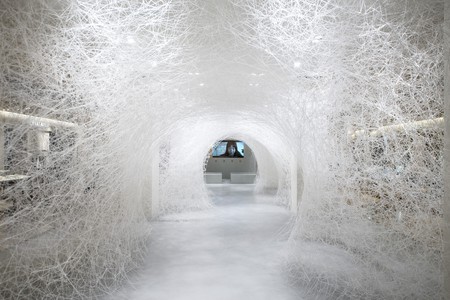 In Shiota’s work, multiple spheres exist. The past and present collide. Transience is given form. The mysterious becomes tangible. And at the centre of everything stands the viewer and the artist. These are immersive installations that we could get tangled up in for years to come.

Chiharu Shiota: Beyond Time is at Yorkshire Sculpture Park until 4 November 2018.