Wabi Sabi: The Japanese Art of Finding Perfection in the Imperfect 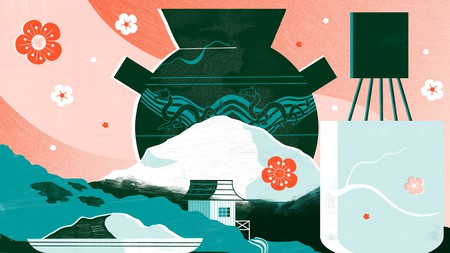 On the surface, Japan seems like a nation built on orderly perfection, but the country’s long-held philosophy of wabi sabi is all about embracing the beauty of the imperfect.

Each year, Japan seems to hit a collective optimistic peak around late March. Across the nation, the air is thick with pollen and anticipation for the arrival of sakura (cherry blossoms), in their many shades of white, pink and grey.

After what can feel like months of waiting for the arrival of these temperamental seasonal guests, (one year, they may arrive two weeks early, the next, they may be almost washed away by unseasonably heavy rain). While this might throw the travel plans of many into disarray, in Japan, the true beauty of the sakura is in its elusiveness. The flower embodies the idea of wabi sabi, an appreciation for the fleeting and imperfect. 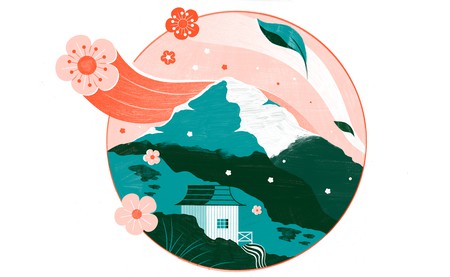 What does ‘wabi sabi’ translate to?

The concept of wabi sabi is famously impossible to concisely describe, while at the same time being almost wholly encompassing. Anyone who’s studied Japanese will understand that the language has a unique way of expressing feelings that the English language simply doesn’t have the vocabulary for. So to better understand this idea, we have to take a crash course in wabi sabi’s etymology.

Wabi (侘び) describes loneliness, not the negative feeling of isolation from others, but rather a pleasant feeling of being alone in nature, away from society. If wabi were a person, he’d be living a humble life in a mountain shack nestled deep in the mountains, free from the binds of daily life. Sabi (寂び) means to be weathered, but in an elegant, rustic fashion. For context, the term ‘to rust’ is also pronounced sabi (錆び).

According to Beth Kempton, Japanese culture expert and author of Wabi Sabi: Japanese Wisdom for a Perfectly Imperfect Life, “over time, the word sabi has come to communicate a deep and tranquil beauty that emerges with the passage of time. Visually, we recognise this as the patina of age, weathering, tarnishing and signs of antiquity.”

Wabi sabi has long influenced Japanese art and design, from zen gardens to pottery making. One of the best examples of the wabi sabi aesthetic is in the tools used in the Japanese tea ceremony, which are often imperfect, mismatched cups and utensils. The concept can be loosely linked to other ceramic movements such as kintsugi (金継), the art of repairing broken ceramics with a paste-like mixture of gold and lacquer. While wabi sabi is based on the idea that nothing is perfect from the start, kintsugi draws attention to the repairs of an object, symbolizing the idea that its history is part of its beauty.

“I think wabi sabi is a spirit of finding and enjoying beauty in something that is old or rusted-over that incorporates heterogeneous changes,” says Japanese architect Rie Allison, who recently opened Mia Mia, an old clothing boutique turned café and bar located in Tokyo’s quaint neighbourhood of Higashi Nakasaki. “As an architect, when I renovate a space, I consider the beauty of how the building has aged until now and the certain harmony together with new design, and how this new space will age 50 years and 100 years too.”

The concept extends to clothing, as well: the fashionista’s appreciation for a garment’s vintage is wabi sabi in action. In the trendy inner-city Tokyo suburb of Shimokitazawa, for example, there are countless vintage stores selling stylishly worn-out garments to customers who are willing to pay for their age.

Wabi sabi is that old jacket you can’t bring yourself to throw out. You like the ragged collar and thinning out patches because they bring a sense of personalised character: one that can’t be produced artificially. It’s the antithesis of factory line, mass-produced tidiness. 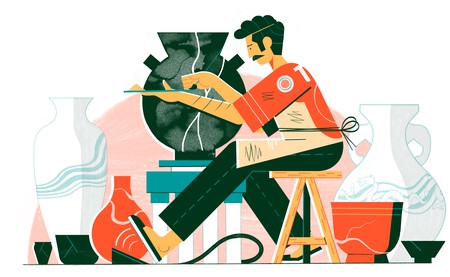 The concept of wabi sabi is imbued in every day life in Japan. In her methods for cleaning and decluttering, best-selling author and cleaning guru Marie Kondo is inspired by the philosophy, encouraging her followers take a moment to ‘thank’ garments for their fleeting use before throwing them away.

This appreciation of time and its gifts is one that helps keep many of the nation’s traditions alive. The tea ceremony is one such example. In contrast to western-style practices like high tea, the Japanese ceremony uses rustic, handcrafted tools. Hosts select the ‘ceremony set’ depending on the wa (私), or harmony of the situation. The guests, the season, the setting and the time of day all impact the tools to be used for the ceremonial performance.

“In a tea ceremony, we don’t have to rely on expensive tools,” explains Tomoko Kamono, a tea ceremony host who has been running her own ceremonies in her hometown of Yokohama for the past five years. “Feeling and experiencing the host’s hospitality is what’s most important.”

The roots of wabi sabi come from the Buddhist teachings of the “Three Marks of Existence”. The first teaching is that of embracing impermanence; a principle observed in Japan’s festivals around the transient beauty of the seasons, such as those celebrating hanami (cherry blossoms) and koyo (autumn leaves). The second teaching is finding solace in the personal growth that results from suffering, and the third is the absence of self – a separation from self-centred thinking and a realisation that we are always in a state of flux.

Hop on a packed commuter train in Tokyo in the middle of peak hour, and you’ll see just how ingrained that last teaching is in the way people conduct themselves. No loud conversations, no phone calls, no music; just calm, mutual awareness of one another. Kempton explains that Japanese people have grown up with wabi sabi, and as a result, “it’s how they navigate the world and appreciate beauty.”

Wabi sabi’s elusive definition is in part the act of wabi sabi itself. Its meaning is subjective, but that’s what makes it so imperfectly perfect.

“Wabi sabi is felt in a moment of real appreciation – a perfect moment in an imperfect world,” says Kempton. “We can nurture it with our willingness to notice details and cultivate delight.”