The Crying Baby Festival, held in Tokyo, is a competition between one-year-old babies to see which one cries or laughs first when being dangled in the air by a sumo wrestler. Yes, you read that correctly.

The festival has become something of a tradition, and has been running for hundreds of years. Each year, Nakizumo – which means “sumo of tears” – is hosted at different temples and shrines around Japan. 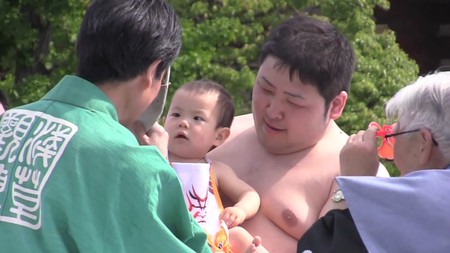 This fearless baby is unfazed by the masked priest | © Culture Trip

Two babies are held aloft by large sumo wrestlers, until the first baby starts crying. The winner of the two babies is determined by whoever cries first. If they both start crying at the same time, the loudest cry takes home the glory. If neither of them cry, mask-wearing priests step in to help get the job done.

Despite the fact that this may sound cruel to the infants, participating is seen as a privilege and parents queue around the block to try and get their child into the competition.

The belief is that the babies are releasing demons, while also providing an amusing spectacle for the onlooking crowds. The unconventional privilege will cost the parents around 15,000 yen (£113).

The whole event is built around a Japanese saying, Naku ko wa sodatsu, which means “crying babies grow faster”. It is also believed that the louder a baby cries, the more blessed by the gods it will be.

Prominent architectural and historical landmarks have been the locations of Nakizumo in the past. Asakusa’s Sensoji Temple in Tokyo is by far the most popular location for the event. The ancient Buddhist temple is the oldest temple in Japan’s capital city and is steeped in history surrounding its former association with the Tendai sect of Buddhism.

So, if the piercing cries of babies are not your idea of entertainment, the location is still worth a visit. But if you do fancy witnessing Japanese tradition, the events are held in late June and the competition starts at 11am, with a second round at 2pm.