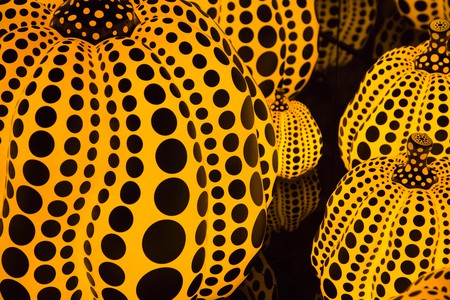 Yayoi Kusama, 'All the Eternal Love I Have for the Pumpkins', 2016 | © ukartpics / Alamy Stock Photo

Japan’s contemporary art scene is richly diverse, home to pioneering artists who have transformed the industry’s landscape on a global scale. From Takashi Murakami’s Superflat movement to Yayoi Kusama’s polka-dotted universe, to collaborative and performative approaches to visual media and the futuristic use of technology in art practices, we profile 10 must-know Japanese contemporary artists. 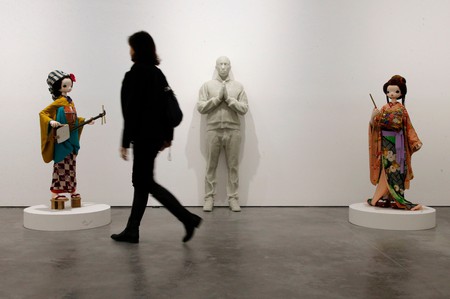 Mandatory Credit: Photo by Francois Mori/AP/REX/Shutterstock (6774789r) A journalist walks past "The Future Pharrell", center, a 2014 resin and shattered glass sculpture by US artist Daniel Arsham, and "Kokemono", left and right, mixed media sculptures by Japanese artist Chiho Aoshima, during the presentation of the exhibition "GIRL" curated by US singer Pharrell Williams at the Perrotin Gallery in Paris, . Williams curated an exhibition encompassing around 40 art pieces, presenting their visions of femininity, muses, female creativity and freedom. The show opens on May 27 and runs through June 27, 2014 France Pharrell Williams, Paris, France | © Francois Mori/AP/REX/Shutterstock

A member of art-production company Kaikai Kiki and the Superflat movement (both founded by legendary Japanese artist Takashi Murakami), Chiho Aoshima is best known for her fantastical urban pop creatures and landscapes. An autodidact who started working with graphic art in Murakami’s factory, Aoshima creates surreal dreamscapes inhabited by ghosts, demons, young women and elements of nature. Her artwork is typically large-scale and printed on paper with materials such as leather and plastic, for texture. In 2006, Aoshima produced City Glow, Mountain Whisper at Gloucester Road station in London as part of ‘Art on the Underground’, transforming 17 successive platform arches into a magical landscape that gradually shifted from day to night, urban to rural. The work depicted Aoshima’s utopian world in which time is suspended and organic creatures are one with otherwise inanimate things. 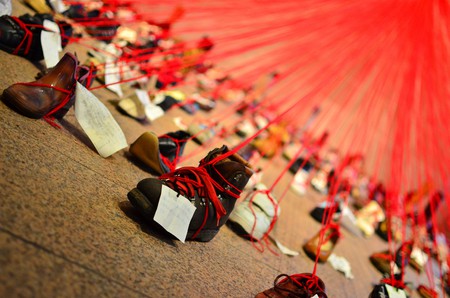 Chiharu Shiota is a performance and installation artist who creates large-scale, site-specific visual installations. Central to her practice are themes of memory and oblivion, dreams and reality, past and present, and the confrontation of anxiety. Her most celebrated works involve impenetrable webs of black thread that enclose a variety of household, personal and everyday objects, such as old chairs, a burned piano, a wedding dress and sometimes the artist herself. Labyrinth of Memory (2012) comprises a series of dresses engulfed by the ubiquitous black thread. These dresses are conceived of as a “second skin”, both molding to and constricting the body. The omnipresence of black yarn is intended to describe and enforce this exact relationship. In the summer of 2014, Shiota installed Perspectives (2004), made with more than 300 donated shoes accompanied by handwritten notes from each donor, confiding one personal memory. Shiota then connected the shoes with strands of red yarn, each suspended from the same hook. Shiota represented Japan at the 56th Venice Biennale in 2015, and her first exhibition at Blain Southern, Berlin, which opened during Berlin Art Week in 2016, caused a sensation. 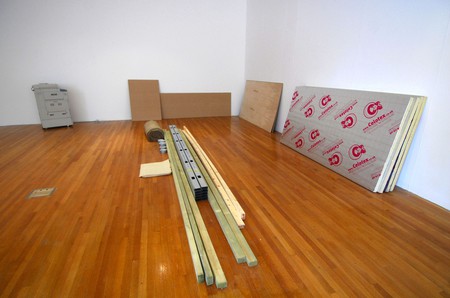 Ei Arakawa is inspired by states of change, periods of instability, happy accidents and elements of risk. His performance pieces and installations involve themes of collectivity, friendship, simultaneity and improvisation. Arakawa’s work is almost always collaborative, and engages with art’s element of social spectacle – from production to destruction. His artistic sensibility is informed by a performative, indeterminate, ‘everywhere-but-nowhere’ condition. His work pops up in unexpected places internationally, multiplying through collaborative processes. In 2013, his work was exhibited in the ‘Kamikaze Loggia’ (Georgian Pavilion) at the Venice Biennale, and in a survey of Japanese contemporary art titled ‘Roppongi Crossing’ at the Mori Art Museum. His installation Hawaiian Presence (2014) was a collaborative project with New York-based artist Carissa Rodriguez for the 2014 Whitney Biennial. At Frieze London in 2014, Arakawa and his brother Tomoo – working as a duo under the name United Brothers – presented a performance work entitled Does This Soup Taste Ambivalent? in which the pair offered soup to visitors, reputedly made with Fukushima’s ‘radioactive’ daikon roots. 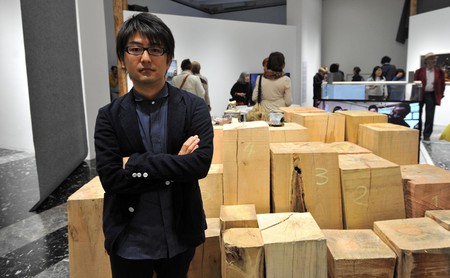 Mandatory Credit: Photo by Andrea Merola/Epa/REX/Shutterstock (8164284y) Japanese Artist Koki Tanaka Poses in the Japanese Pavilion 'Abstract Speaking' During a Preview of the 55th International Art Exhibition in Venice Italy 29 May 2013 the Art Biennale of Venice Opens to the Public From 01 June to 24 November Italy Venice Italy Venice Art Biennale - May 2013 | © Andrea Merola/Epa/REX/Shutterstock

Deutsche Bank 2015 Artist of the Year Koki Tanaka’s visual approach explores community and a shared experience of creativity and imagination, encouraging exchange among participants while advocating for new rules of collaboration. His installation at the 2013 Venice Biennale’s Japan Pavilion consisted of a video with objects transforming the pavilion into a platform for artistic sharing. Tanaka’s videos and installations delve into the relationship between objects and actions, recording simple gestures performed with everyday items such as a knife cutting vegetables, beer poured into a glass and the opening of an umbrella. Nothing of magnitude happens in these videos, yet the compulsive repetition and attention to minute detail compel the viewer to value the mundane. 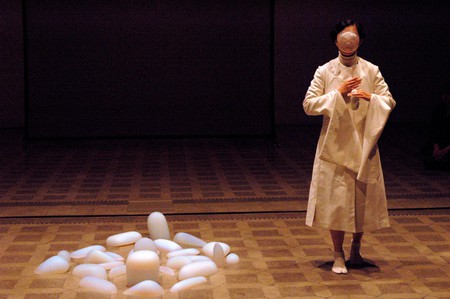 Mariko Mori creates multimedia works in video, photography, new media and installation art. She expresses a minimalist, futuristic vision through sleek, surreal forms. A recurring theme in Mori’s work is the juxtaposition of Eastern mythology with Western culture, as seen in her digitally layered images. Mori came to prominence with Wave UFO, which debuted at Kunsthaus Bregenz, Austria, in 2003. Subsequently, this piece traveled to New York and was later included in the 2005 Venice Biennale. In 2010, Mori founded the Faou Foundation, an educational and cultural non-profit organization through which she dedicated a series of her own harmonious, site-specific permanent art installations to honor the six habitable continents. Most recently, a Faou Foundation permanent installation titled Ring: One With Nature has been installed over a scenic waterfall at Visconde Mauá in Resende, not far from Rio de Janeiro. 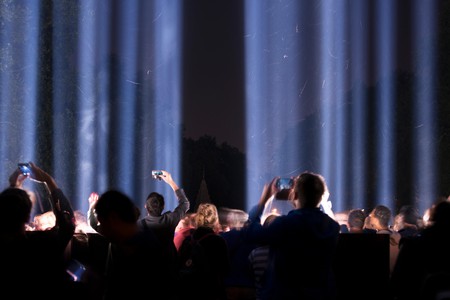 Ryoji Ikeda is a new-media and sound artist whose work primarily engages with sound in a variety of ‘raw’ states – from sine tones to noise – employing frequencies at the edge of the human hearing range. His performances and immersive installations comprise computer-generated sounds that transform visually into video projections, or digital patterns. Ikeda’s audiovisual work uses scale, light, shade, volume, shadow, electronic sounds and rhythm to flood the senses. His famous Test pattern [no. 5] comprises five projectors that illuminate a floor space some 28 metres (92 feet) long and eight metres (26 feet) wide. The installation converts data (text, sounds, photos and movies) into barcode and binary patterns of zeroes and ones. Ikeda’s oeuvre also includes one-night performances, such as datamatics [ver. 2.0], an updated version of an audiovisual concert that he has presented in several venues around the world since 2006, starting from Zero1, San Jose, California, for ISEA 2006. Ikeda examines and applies mathematical and scientific methods to shape music, time and space, creating mesmerizing experiences. He explores sound and vision, deconstructing their physical properties to reveal the complex relationships involved in human perception. Ultimately, Ikeda tests the extreme potential of digital technology, challenging the thresholds of perception. 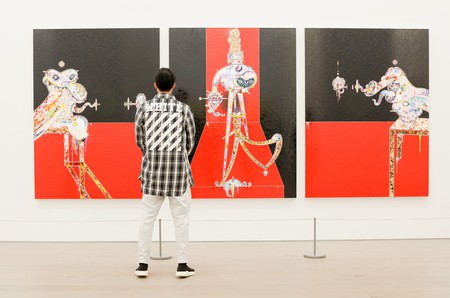 Takashi Murakami is one of Japan’s most iconic contemporary artists. From paintings to large-scale sculptures and fashion collaborations, Murakami’s work is influenced by manga and anime. Founder of the Superflat movement and the Kaikai Kiki artist collective, Murakami has developed and supported the careers of many of his contemporaries. The term ‘superflat’ describes both the aesthetic characteristics of the Japanese artistic tradition and the nature of post-war Japanese culture and society. Tradition left a legacy of flat, two-dimensional imagery, with emphasis on flat planes of color, which has been re-elaborated in contemporary culture through manga and anime. Post-war Japan has also experienced a ‘flattening’ of differences in social class and popular taste. Murakami’s own practice involves repackaging elements that are usually considered ‘low’ or subcultural and presenting them in the ‘high’ art markets of fashion and art. His provocative My Lonesome Cowboy (1998) sold at Sotheby’s New York for a record $15.2 million in 2008. In addition to his artwork, Murakami has collaborated with Marc Jacobs, Louis Vuitton and Issey Miyake. 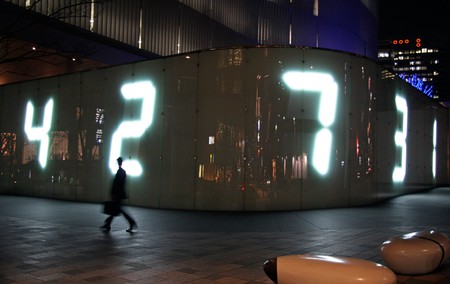 Tatsuo Miyajima is a sculptor and installation artist whose highly technological works employ contemporary materials such as electric circuits, video and computers, centered on the use of gadgets since the 1980s. Miyajima’s core artistic concepts draw inspiration from humanist ideas and Buddhist teachings. The LED counters in his installations continuously flash in repetition from 1 to 9, symbolizing the journey from life to death, but avoiding finality, which is represented by 0 and never appears in his work. His ever-present numerals, presented in grids, towers and circuits, express his interest in ideas of continuity, connection, eternity and the flow of time and space. Most recently, Miyajima’s work titled Arrow of Time (Unfinished Life) was showcased in the Met Breuer’s inaugural exhibition, ‘Unfinished: Thoughts Left Visible’ in New York City. 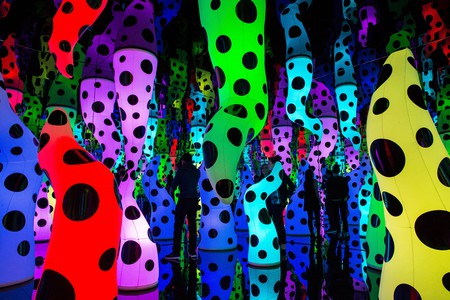 Yayoi Kusama, "I Who Have Arrived In Heaven" | © Scott Houston / Alamy Stock Photo

With an astounding career spanning seven decades, Yayoi Kusama has explored the realms of painting, drawing, collage, sculpture, performance, film, printmaking, installation and environmental art, as well as literature, fashion and product design. Kusama has developed a highly distinctive style of polka-dotted art, which has since become her trademark. Such illusory visions are, for Kusama, the product of hallucinations she has experienced since childhood, in which the world seems to be covered in proliferating forms. Kusama has covered entire rooms with colorful dots and ‘infinity’ mirrors that endlessly reflect colorful light forms. 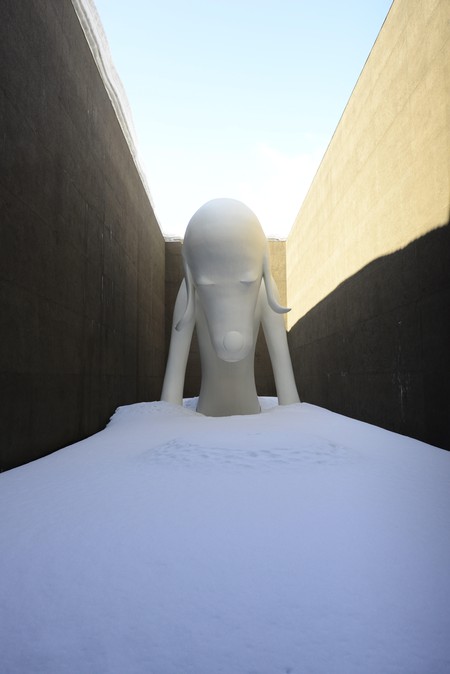 Yoshitomo Nara creates paintings, sculptures and drawings depicting his signature wide-eyed children and dogs – subjects that attempt to capture a child-like sense of boredom and frustration and recapture the fierce independence natural to children. Reminiscent of traditional book illustrations, his aesthetic presents a restless tension, partly influenced by Nara’s love of punk rock. The titles of his works are testimony to this, from The Girl With the Knife in Her Side (1991) to Silent Violence (1998), Neurotic to the Bone (1999) and There Is Nothing (2000). In 2011, New York City’s Asia Society Museum held his first major solo exhibition, titled ‘Yoshitomo Nara: Nobody’s Fool’, comprising work that spans the artist’s 20-year career. The works on show were intimately connected to the sensibilities of youth subcultures worldwide, focusing on themes of alienation and rebellion, particularly in relation to rock and punk music.