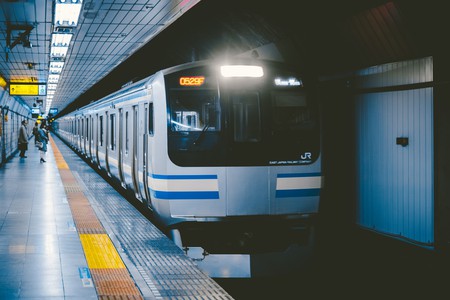 Tokyo is a train-loving city, which is fair considering that the whole nation of Japan essentially runs on tracks. The country is home to the world-famous shinkansen (which will soon be barking like a dog), and Tokyo’s biggest tourist site, the Shibuya Scramble, was built around a train station.

Japan loves trains so much that they even have subculture terms for specific train nerds, including ‘onkyou-tetsu’, which is someone who loves the sounds made by trains and recordings, and ‘bkiben-tetsu’ or people fascinated by the lunch boxes available on the train.

However, you don’t have to be a local locomotive geek to appreciate the efficient and wondrous world of Tokyo trains. ‘Real-life game’ company Scrap has teamed up with Tokyo’s underground metro network to produce their very own unique city-wide scavenger hunt, and you can join in on the fun.

Solving mysteries in the underground. The Japanese metro is so amazing that they can even orchestrate a metro-wide puzzle game that involves you riding and exploring the Tokyo Metro! #tokyo #trains #puzzles #mystery #theundergroundmysteries #japan

Titled ‘The Underground Mysteries’, the game combines lateral thinking, problem-solving and elements of traditional scavenger hunts to send participants far and wide throughout the underground rail network on the hunt for clues.

To play, participants have to pick up a game kit from the Tokyo Metro pass office at Ueno station or Shinjuku station. The kit, which costs 2,160 yen (around US$21), contains a booklet, clues to get you started and a 24-hour Tokyo metro ticket to get you to all the necessary locations. Filled with all the essential tools to begin your hunt, it’s a ‘choose your own adventure style’ journey where the different puzzles depend on which stations you choose to visit.

Overall, the game takes around three to six hours to complete, but there’s no real time limit on the hunt. So, if you want to take it easy and check out the local sites in the area, there’s no harm in doing that too. Even if you’ve lived in Tokyo for a while and the thought of hopping on another train seems like the complete opposite of fun, what makes this game so special is its utilisation of hidden nooks, crannies and secret spots, giving even the most seasoned metro traveller a fresh perspective on their most visited stops.

If you’re interested in trying it out for yourself, you’d better be quick as the game kits are rather limited. They went on sale on October 1, 2017, and will no longer be available after January 31, 2018. For those heading to Shinjuku station, be aware that the English game kits are only available for purchase on weekends and public holidays between 10 am and 2 pm. If you miss out this time though, don’t sweat. As it’s been such a hit, there is no doubt that the game will be making a return for the 2018–2019 period. Stay ‘choo-choo’ tuned at realescapegame.jp.