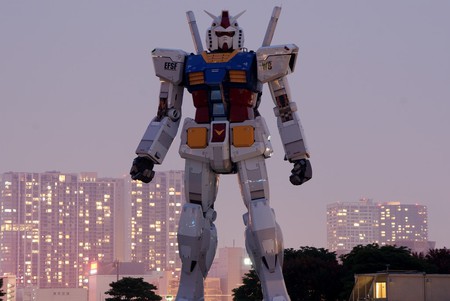 If you’re in Japan, head to the Tokyo Bay neighbourhood of Odaiba and chances are you’ll come across some oddities – and now there’s one special lady who can show you where to find them. Here’s everything you need to know.

Odaiba is an artificial island originally created in the 1850s – since then it’s become a commercial and entertainment hotspot, and is now home to some pretty unsual sights. However, none among them are maybe as strange as Aqua City shopping centre’s most famous employee, Chihira Junco.

Face of the future

Dressed in her corporate best, Junco is an ultra-humanistic robot and the face of the shopping centre’s information desk. Speaking English, Chinese and Japanese fluently, she guides lost and confused tourists though the labyrinth-like hallways of the shopping mall. Beyond that, she’s more than happy to point out other areas of note in the Odaiba area.

Where did Junco come from?

First introduced to the world in 2015, Chihira Junco is the creation of local Japanese tech giant Toshiba Corporation, who worked in collaboration with a number of universities to create Junco as well as four other siblings, which have not yet been released to the public. Following the success of Junco, the company has planned to roll out around over 10,000 similar bots by 2020.

Visitors to Aqua City can interact with Junco by tapping on the screen at the desk to ask questions such as “How do I get to the the closest train station?” through to “Where are you from?”. For that little extra humanistic touch, she’s been pre-programmed to answer more personal questions too.

Ask the right questions and you’ll learn she lives alone in the Minato ward and her favourite foods are watermelon and Japanese pear. Programmers say that they’re hoping to be able to upgrade Junco in the future so that guests can ask her questions directly, further blurring the very fine line between human and robot interaction.

Obligatory photo of a speaking robot when in Japan, at the information center in Aqua City. #ChihiraJunco #nofilter

When she’s not busy reciting facts to fascinated guests, Junco can be seen moving from side to side and blinking occasionally. Showing her fun side, Junco also dresses up for different seasonal events like Christmas. Visit the information desk between 11am and 9pm daily to meet her in the (artificial) flesh.

The future in Odaiba

Beyond Junco, Odaiba is home to a number of other fascinating and strange Tokyo sites, including a 20-meter (66-feet) tall statue of Japan’s popular Gundam robot, and a replica of New York’s Stature of Liberty. This quirky pocket of Tokyo is also set to get a little more surreal later in 2018 when art collective teamLab unveil their first ever permanent digital museum.

For more details on things to see and do in the area, ask Junco – she’ll be able to help you out.