To Bow or Not to Bow in Japan 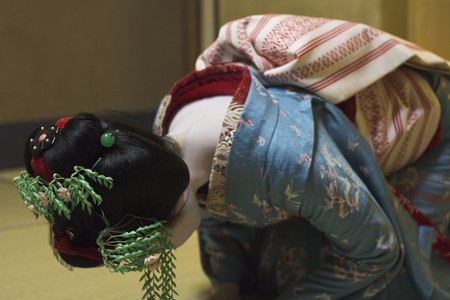 US President Donald Trump recently visited Japan as the first stop on his 12-day Asia tour. Trump met with Japan’s Emperor Akihito, and during the meeting he brazenly refrained from bowing and simply shook hands with the Japanese royal, instead. Whether this was a humble mistake or a calculated move is anyone’s guess, but one thing is for certain—when it comes to Japanese etiquette, bowing is serious business.

In previous years, US leaders have been criticised by fellow Americans for bowing to religious and political Japanese leaders. Though it’s a long-held gesture of respect, Obama’s almost 90 degree bow to Japanese Emperor Akihito and Empress Michiko was slammed by conservatives during his visit in 2009, as they said it made the US leader look less powerful. Prior to Obama, George H.W. Bush also bowed while attending the funeral of the late emperor in 1989, and in 1994, Bill Clinton bowed, bending forward with his hands together when he met Japan’s emperor at the White House.

Even though Obama was attacked by conservatives for his low bowing, it wasn’t the bow that was the social faux pas. What Obama technically did wrong was offering a bow and a handshake. It’s not common practice to touch the Emperor or Empress, but these days many foreign guests are given a pass.

During Trump’s visit to Japan, he’s been left in the dark, as these briefings on rules and etiquette in foreign nations typically falls to the US Chief of Protocol, a role the Trump Administration has yet to fill, as Trump’s nominee, Sean P. Lawler, hasn’t been confirmed. This could become a larger issue as the President and his staff continue travelling throughout Asia, as showing respect with specific gestures is incredibly important throughout the continent.

In Japan today, bowing is ingrained in everyday interactions, and many don’t give it a second thought. However, there are subtle nuances that may carry very different meanings. Although President Trump might or might not want the help, here’s a guide to bowing etiquette in Japan.

To begin with, the best time to bow is when saying ‘Hello’ or ‘Goodbye’, when starting or ending a class or meeting, when thanking someone, or when apologising. On the whole, bowing is a sign of respect, appreciation, or remorse, depending on the context.

There are two types of bowing bases: the standing bow and the sitting bow. The standing bow is the most common in Japan (sitting is more related to times of worship). Always keep a straight back, as a curved spine lacks the posture and reverence required for a well-executed bow.

First, the eshaku bow is a 15-degree bow of greeting. A little more casual than the others, this smaller bow is used when greeting an acquaintance who is your equal in business or socially, such as a co-worker or distant friend. There’s no time needed for this easy little dip down.

The second is the keirei or futsuurei bow, which is a 30- to 45-degree polite bow generally used during more formal events, such as business interactions or meeting with the in-laws. In Japanese, futsuu means ‘ordinary’ and kei means ‘respect’, so as you can guess, this is a bow of respect given to those in a higher position or social standing. Timing is more important with this bow, as generally you should hold the position for around two-and-a-half seconds.

Finally, there’s the bow to rule them all, the saikeirei, spanning a huge 45-70 degrees. This bow is used to convey profound respect or regret. There are religious purposes, but beyond that, the only time to use it is for dramatic apologies and when meeting with the Emperor. So, it turns out that in 2009, Obama pulled the right moves.