Understanding the Magic of Itsukushima Shrine 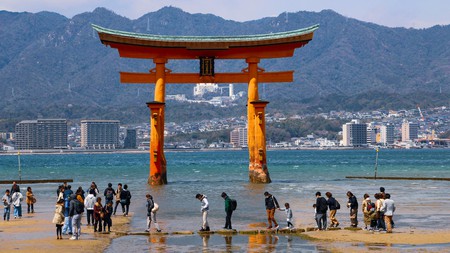 A mile off the coast of Hiroshima in western Japan, a towering sunset-orange shrine gate appears to float in the sea. This ethereal site is Itsukushima Shrine’s inimitable O-torii.

Torii, recognisable to anyone who’s visited Japan, are the red wooden shrine gates that vary from tiny miniatures on street corners to 120-foot (37-meter) behemoths. Torii mark the entrances to Shinto shrines and divide the sacred from the ordinary and the world of humans from the realm of kami (divine beings).

Although it might look as though it does, Itsukushima’s O-torii doesn’t actually float on the water. The gate is built on four 50-foot-tall (15-meter) pillars that stand in the shallow, muddy tide pools. The whole shrine is built like a dock, resting just above the sea, and was first constructed nearly 1,500 years ago. 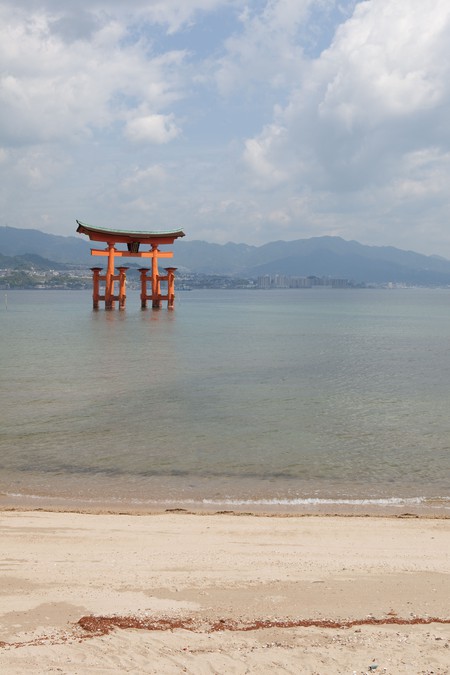 But why was it built, and what does it mean? The deep spiritual and symbolic significance of one of Japan’s most iconic shrines as well as the architectural accomplishment of preserving Itsukushima through hundreds of years of storms and tides create the perfect entry point into a deeper appreciation of Shintoism and the thousands of shrines and temples that dot the Japanese landscape.

Here’s what any visitor should know about Shinto architecture and Itsukushima Shrine.

The significance of Itsukushima Shrine

Now with over 10,000 visitors per day, Itsukushima Shrine has become iconic to the point of being nearly synonymous with Japan, or at least Japanese Shinto. Shinto is Japanese folk belief and practice, and dates back to ancient times. You can see Shinto everywhere from the top tourist destination Meiji Jingu Shrine in downtown Tokyo to simple cords tied around cypress trees, which protect against evil spirits. 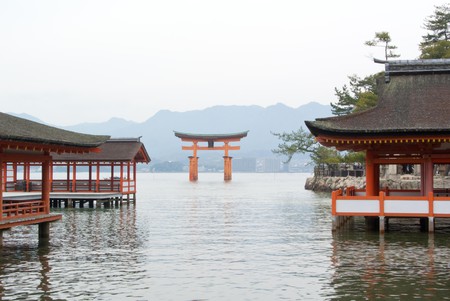 The island of Itsukushima (also known as Miyajima) has been considered sacred since the dawn of history. Many believe that the shrine was first constructed in AD 593, although the earliest record of a shrine in this location dates to AD 811. Devoted to three female deities of maritime safety, Itsukushima Shrine remained only of regional significance until Taira no Kiyomori, one of the most powerful noblemen of the 12th century, reconstructed it and propelled it to national prominence.

Mimi Yiengpruksawan, professor in the History of Art at Yale University, explained to Culture Trip that Itsukushima is of special historical and architectural significance because it preserves the classical style of a 12th-century aristocrat’s villa.

“Shinto shrines are residences for deities,” she said. “Three female ocean deities live in Itsukushima and are worshipped there. The corridors of the shrine are essentially the halls of the deities’ house. That’s why it’s built to look like a nice country villa – the spirits actually live there.”

Itsukushima is essentially a luxury beach residence for an ocean god, with dozens of different halls, stages and buildings built over the water. Winding bridges and walkways link the different areas and allow for a variety of ways to get from place to place.

Due to its treacherous position on water, the shrine requires extensive maintenance. Kamachi Kiyoshi, a local Miyajima tour guide, says that the floorboards are carefully engineered to be able to withstand high tides by being set slightly apart, so water can flow over them.

“The Seto Inland Sea is relatively calm, so the impact of the tides are minimised. Even so, the tide often rises due to storm surges or typhoons,” he says. “This unique engineering ensures that when the water level rises, the buildings aren’t destroyed.”

The shrine also requires constant building and rebuilding. “The current O-torii is the eighth generation gate, built in 1875. But [due to getting worn by the sea] it’s going to be replaced soon,” Kamachi said.

In fact, restoration work to Itsukushima has been ongoing since summer 2019, including repairs to the bases of three of the O-torii’s six pillars and a fresh vermilion paint job. According to the Itsukushima website, a date for the completion of the construction has not yet been set.

The deeper meaning of a floating shrine

Most Shinto shrines, like Itsukushima, are built as homes for nature spirits. Accordingly they are constructed using natural, organic materials and reflect ancient Japanese domestic architecture. But Itsukushima’s unique position on the sea and constantly changing appearance due to the shifting tides has turned it into a national treasure.

“The shrine receives a lot of support from the government as a site of immense emotional significance,” Yiengpruksawan said. “When you disembark and walk onto the platform, you’ve entered the presence of a deity. You’ll see people worshipping, giving offerings. It’s a magical place.”

The shrine is also designed to merge with the surrounding nature, a common theme in Shinto architecture. The tides continuously bring water into the shrine and out again, creating a natural connection and flow between the surrounding landscape and the structure. Every piece of the shrine’s architecture has layers of meaning, from symbolic lacquer paint to unique lanterns, mirror ponds, winding halls for Buddhist funerary practices, and subtly curving surfaces that emphasise the natural feel.

The constant need to refurbish and rebuild Itsukushima is another way in which the shrine has become a part of the natural world. The tradition of using architecture to mimic natural cycles of birth and death is unique in the world to Japanese Shinto architecture.

Contrary to how a tourist may visit Itsukushima as one-time destination, Shinto shrines are a part of the daily lives of many Japanese people. Itsukushima is no different.

Many of the locals on Miyajima are fishermen, making livings based on the tides of the sea and even collecting shellfish and oysters in the mud at the base of the O-torii. Meanwhile, daily dance and theatre performances are tributes to the ocean deities of the island; people visiting can, of course, stop to watch and enjoy these spectacles.

Itsukushima Shrine is truly a part of the Miyajima – and broader Hiroshima – community. “Miyajima hosts major festivals throughout the year and people living all throughout Hiroshima visit regularly to enjoy these events,” said Kamachi. “Many people living here also visit the shrine in the ordinary course of their lives simply to offer a prayer.” 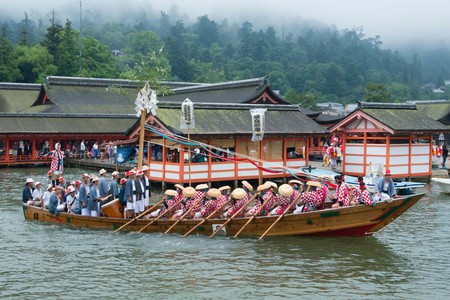 ‘Shrine fatigue’ – seeing so many temples and shrines that you can’t even appreciate them anymore – is a common symptom for travellers to Japan. When asked about how to avoid shrine fatigue, Yiengpruksawan suggested stopping to take a breath.

“Go slowly,” she said. “Itsukushima is full of history, religion, literature, art and architecture. But it’s also just a beautiful place to look at the ocean.”