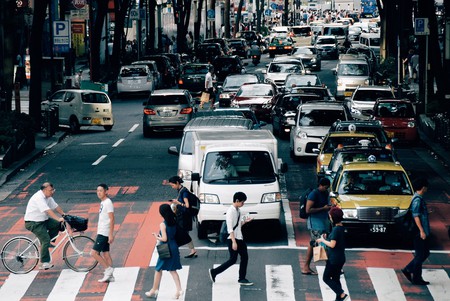 Homeless Japanese man Kotani Makoto is a challenge to previously held social stigmas. He’s defying the assumptions of just what one needs to be happy and successful by travelling the world, eating at world class restaurants, being invited to high-end art shows, and doing it all by living off the very low salary of 50 yen (about 45 cents) per day.

His story begins in 2013, when the then failed comedian decided after years and years of trying to make it on the Tokyo comedy circuit to pack it all in and become homeless. What’s so fascinating about his new life direction was that, unlike many other heartbreaking stories of homelessness, Makoto’s decision was more intentional.

While staying with fellow comedian King Kong Nishino in Tokyo, Makoto’s inability to be a good housemate became too much. He was messy, forgetful and clumsy, all the qualities you try to avoid when picking a roommate. After a few months, Nishino suggested that given his inability to maintain a somewhat stable house, Makoto should probably just try to be homeless, and so that’s what he did, as he told Japanese culture website Tofugu.

Thinking that it would be a new interesting life decision, Makoto went about joining what is for some a rather lucrative ‘human rental market’ in Japan. Though it sounds weird, this human rental market is in fact a growing economy in Tokyo, a city where people’s work lives and single living apartments mean human interaction is more difficult, and has become a monetised commodity in some circles. From renting a friend, to renting an ossan (middle-aged man) to listen to your problems, it’s becoming a more widely accepted practice for those looking for company and those willing to give it in exchange for an extra few yen.

Thanks to his affable personality and ability to make things fun, as well as his rather low fee, Makoto became an online hit, and it wasn’t long before his celebrity status and online bookings skyrocketed. How it works is clients go online, book him out for 50 yen and in exchange he will do something for them. Whether it’s providing company, or doing chores, or simply being entertaining. Over time, what was most interesting was the fact that many of his customers felt guilty about renting him out for such a low price, so in exchange many offered to take him out for food, give him a place to stay, or even design clothes for him.

After meeting and making friends through his new job as a rental, Makoto was able to garner a loyal and dedicated family, many of whom follow him on Twitter. These days, if he needs a place to stay or somewhere to go, he’ll just tweet it out and chances are a member of his ‘global family’ will be willing to accommodate.

In the past few years, he’s also managed to travel the world. Not limiting his services to Japan, you can fly Makoto anywhere across the world, as long as you pay the transportation fee and the standard 50 yen, of course. He’s been flown to Korea simply to check on the weather in Seoul and even Vietnam, where his client wanted to know what was more humid, Japan or Vietnam during the rainy season.

Given that his self-described personality traits of being sloppy, unreliable, messy, lazy and disorganised seem to mean the odds are stacked against him, he’s been able to crave himself out an incredibly unique and enviable life. If you want to know more or are even interested in renting Makoto, you can go to his Twitter or website where he lists his availability and keeps followers updated on his movements.