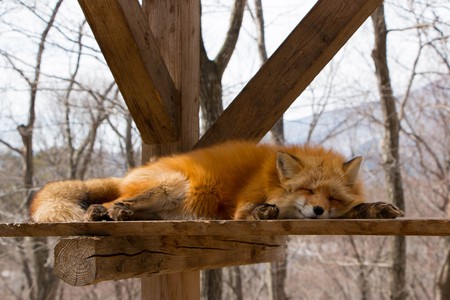 Crime is famously low in Japan, most especially in smaller country towns, so when the city of Nagaokakyo, a town in the Kyoto region, was in the midst of a grand shoe heist, the police knew a shady character or potentially band of characters were running amok through the town.

They set up a stakeout at midnight, one that would ultimately run for six hours before the culprit was busted. After a long night of watching and waiting, the thieves came out of the shadows and right into the paths of the local police: two slinking, sneaky, sly foxes, one of the country’s most iconic figures.

The hunt for the sticky pawed pair started on May 20, after eight households reported that their shoes had been stolen. Between May 10 to 19, the Mukomachi Police Station had received 15 damage reports from locals with missing sandals.

“I can’t believe that foxes stole my sandals,” said one of the local residents, 36, to Japan’s Mainichi newspaper.

Curiously, the foxes weren’t nabbing the sandals one by one, but rather in well-organized pairs. The police’s five-man shoe-hunting team discovered around 40 pairs of sandals in total all scattered in and around a burrow located in the backyard of a local empty house in the residential area of Nagaokakyo.

So, what on earth would foxes need from pairs of sandals? Well, according to Naoki Yamashita, chief of Kyoto City Zoo, who commented on the matter, it is assumed that the foxes were in the midst of building a new burrow, and were possibly collecting the shoes out of a typical fox instinct to stock up on food and other necessary supplies.

Throughout history, Japan has had an interesting relationship with a number of adorable but cheeky creatures running amok throughout the nation’s picturesque rural towns.

Scattered along the rolling hills of Kisarazu City, Chiba, just a little over an hour from Tokyo, are a cluster of robotic, solar powered wolves. These terrifying creatures, known as ‘Super Monster Wolves’ were created as a way to keep local boar and deer away from the crops. They were built in the shadow of the area’s local wolf population, which were unfortunately eradicated during a culling campaign in the 1800s.

Also around 40 years ago, the introduction of an anime raccoon named Rascal kick-started one of the nation’s most devastating plagues. As raccoons grew in cartoon popularity, Japan started importing American raccoons into the country in hope that they’d make great family pets. They didn’t. And as a result, even today they are responsible for US$300,000 in agricultural damage each year.