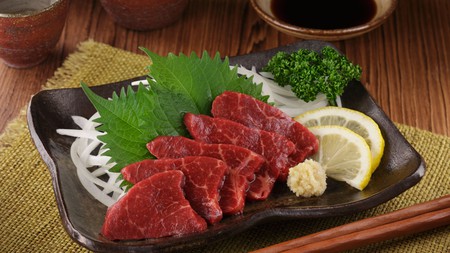 As one of the most foodie-friendly small cities in Japan, Kumamoto has endless options when it comes to finding delicious things to eat. Here’s our pick of the best local foods around.

Kumamoto is one of the best places in Kyushu to experience a wide range of unique delicacies. Despite having a relatively small number of foreign residents, Kumamoto offers a multitude of cuisines – including Chinese, Korean, Indian, Sri Lankan, Thai and Turkish – to the point that it’s almost a wonder that residents get around to eating anything local. However, Kumamoto has several speciality dishes that are famous throughout Japan, and a trip to Kumamon’s hometown wouldn’t be complete without sampling some of the areas top delicacies. 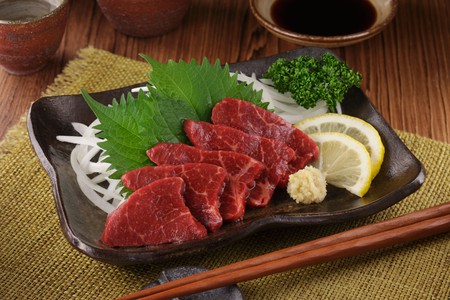 While some travellers shudder at the thought of eating horse meat, adventurous diners will be keen to try basahi, which is Kumamoto’s most famous dish. Sashimi-style slithers of raw meat are presented alongside garlic, ginger, spring onions, red onion and lemon – all rich, punchy flavours which blend together perfectly if you can manage to get a tiny bit of each seasoning in every mouthful. Horse meat is chewy but flavoursome, and this dish usually includes with both dark meat and lighter meat. If you can’t face it raw, look out for horse meat hotpot (arguably a better way to eat horse meat, as it isn’t so tough on the teeth when cooked) One of the best places to try horse meat either raw or cooked is at the local speciality restaurant, Yokobachi.

Another famous dish from Kumamoto, karashi renkon is an acquired taste but one to try if you love spicy food. Lotus root is a popular ingredient in Asian cooking, but this is one of the most unique ways to try it. A paste is made from miso mixed with a spicy mustard and turmeric, rendering the dish a striking yellow colour. The paste is smeared onto the lotus root before it is deep fried, giving it a crunchy crust. This is a popular side order or snack to go with beer. If you ever want to make it yourself, there’s a great recipe on Just One Cookbook. 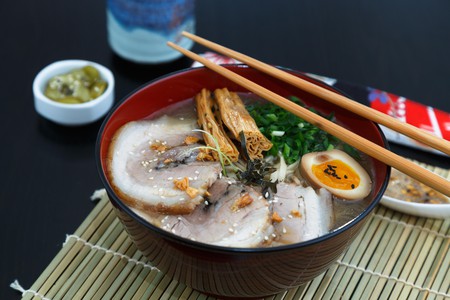 Ramen is popular all over Japan, but the broth that the noodles are cooked in varies by region. In Kumamoto, you can sample a sumptuous broth known for its creamy flavour. Said to have originated just up the road in Fukuoka, this variety is a speciality dish across Kyushu and a must-try in Kumamoto. The cloudy tonkotsu broth takes its unique flavour from pork bones, boiled for several hours to produce a soup so rich and flavoursome that the liquid alone is like a meal. Usually served with a slice of pork belly, spring onions, seaweed, ramen noodles and half a boiled egg, this substantial meal is usually customisable with other toppings. The best place to sample this in Kumamoto is Akagumi Ramen, which offers a basic bowl for ¥500, upgraded bowls for ¥680 or ¥700, and set meals of incredible generosity which you’re unlikely to conquer.

If you want a lighter noodle dish, look out for taipien. This Chinese-inspired dish is particularly popular in Kumamoto and is a lower-calorie option for light lunches. Made with vermicelli glass noodles, it’s a seafood-heavy dish often served with prawns, squid, boiled eggs and green vegetables. 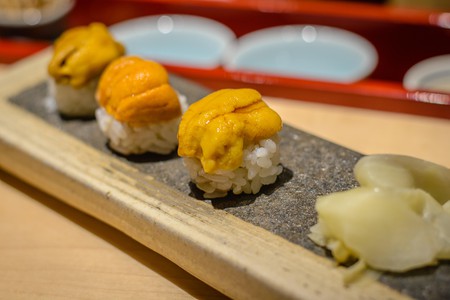 Amakusa, in the south-west of Kumamoto, is known for its delicious seafood as much as its dolphin tours from Hondo Port. If you’re down that way, seek out uni – sea urchin. The bright orange colour is fairly unappealing, and the strong taste isn’t for everyone, but if you like bold seafood flavours, this is the perfect dish.

Kumamoto is a farming prefecture, surrounded by lush countryside and home to a bustling local market where you can buy produce grown just down the road. To sample the best local vegetables grown at the time of your visit, order a hot pot (called nabe, or shabu-shabu) with seasonal vegetables. Autumn is the best time to sample a variety of local veggies, such as kabocha (Japanese pumpkin), taro, sweet potato, mushrooms, and aubergine which is one of the best local crops. In the winter, try daikon (Japanese radish), turnip or renkon (lotus root). Takenoko (bamboo shoots) and shitake mushrooms are eaten in spring, and summer is best for edamame, shiso leaf, okra, cucumber and bitter melon.

Dairy products are relatively new in Japan (since the 1950s), and as a mountainous island there isn’t much room for grazing cattle. However, near Kumamoto is Aso, an area renowned for its natural beauty and rolling hills where herds of cattle are kept. As such, Kumamoto is a great place to find local dairy products of excellent quality. Milk, ice cream, cream cakes, chewy milk candy, pudding… all made with milk from Guernsey or Jersey cows – cattle whose ancestors originated from the two small islands in the channel between the UK and France.

With herds of specially imported cattle in the surrounding countryside, it’s no wonder that local beef products are popular in Kumamoto. Wagyu isn’t the be-all and end-all of beef in Japan, and there are plenty of amazing dishes to try that don’t hail from Kobe. In Kumamoto, try beef-tongue salad with lemon dressing for a fresh and flavoursome dish. Yodogawa Steakhouse offers burger sets, steaks and more. 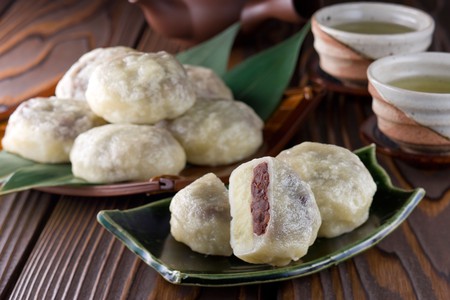 A sweet snack to try on your trip to Kumamoto is ikinari dango, a mochi cake with a filling of red bean paste and sweet potato, wrapped in a chewy, glutinous mochi skin. While this dessert doesn’t sound quite as appealing as a chocolate gateau or cream-filled choux pastry, it’s certainly sweet and for less than ¥100 is worth a try. The name translates roughly as ‘suddenly… cake!’ because of the quick and easy method for making them. If you visit Suizenji Koen, Kumamoto’s picturesque garden, you can buy ikinari dango (and see them being made) from one of the stalls on the tourism street.

While the ikinari dango cake is actually made from mochi, there’s another Kumamoto delicacy that’s more like a stereotypical cake. Horaku manju is a round cake filled with either red or white bean paste. If you’re not a fan of red adzuki beans, try the white one instead which has a lighter, sweeter taste and a less gritty texture. They’re not just a popular snack (with queues outside the best-known stalls) but also a popular souvenir. Buy them boxed at the train station, or visit the stall on the Kamitori shopping arcade to buy them fresh.