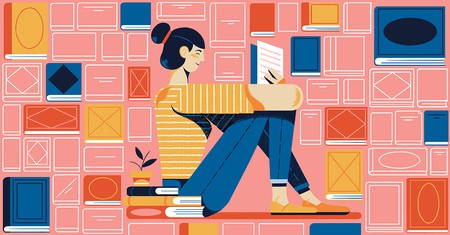 Sometimes, a word in a different language fills a gap so perfectly that no other expression will do. In Japanese, there’s one word that all book worms will relate to.

Japanese and English borrow words from each other all the time. There is a whole subset of the Japanese language known as gairaigo (loan words), many of which come from English, including tabako (tobacco) for cigarettes and resutoran (restaurants) meaning diners. It’s why we call a large wave a tsunami and singing over famous tracks in a bar, karaoke.

The English language has evolved to become a glorious treasure trove of borrowed words, phrases, and sayings from all over the globe. Yet, there are still gaps in the language which sometimes make it hard for speakers to express themselves. Sometimes, a sensation you never knew existed only crystallizes once you learn there’s a word for it! Such is the case with the Japanese word tsundoku (積ん読) which describes the habit of accumulating more books than you can actually get around to reading.

The word is a clever pun combining two Japanese words. Tsun (積ん) comes from the verb meaning ‘to pile’ and doku (読) from ‘to read’. It goes deeper than that, however, as the Japanese phrase ‘to leave piled up’ is tsundeoku – very similar to the word tsundoku.

The first known instance of tsundoku was recorded in a magazine in 1901. However, it is hard to know for sure the exact origins of tsundoku as new words often develop over time and by word of mouth before being written.

Here are a couple of ways to use the word tsundoku:

‘I want to read all my tsundoku, but I don’t have the time.’

Though the word isn’t necessarily used in everyday conversation in Japan, the phenomenon is incredibly relatable. Who hasn’t entered a bookshop and innocently thought ‘it’s time for a great new read’, only to leave with a stack of tomes that end up on the shelf for an eternity?

It’s become such an epidemic that English speakers around the world have eagerly adopted this foreign phrase and even turned the concept into a meme. Will tsundoku’s addition to the English lexicon be a fleeting viral sensation, or will the word resonate long enough to endure? Only time will tell.