The Unlikely Inventor of Kaiten Sushi 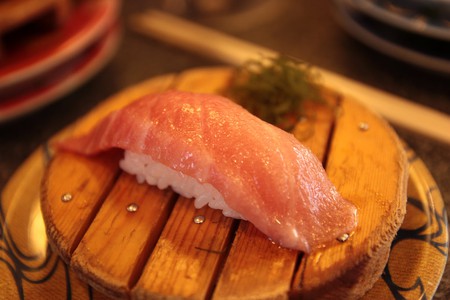 Conveyor belt sushi or kaiten sushi (pronounced kaiten-zushi) is popular for its speed, convenience, and usually for its low price point. While it was developed as the answer to a simple staffing problem, it ended up being the solution to much more than that. Its story begins years ago, in Japan during the 1950s.

Like many great Japanese inventions, kaiten sushi was developed in Osaka, this time by a sushi chef and restaurateur named Yoshiaki Shiraishi. When Shiraishi found it difficult to manage his sushi restaurant on his own, he realized he’d have to get creative if he wanted to stay in business.

Inspiration struck one day in 1953, as Shiraishi watched beer bottles moving along at a brewery. If only he could harness technology like that for his restaurant, he’d be able to run his shop more efficiently. He could keep labor costs down and allow himself to focus on creating delicious dishes for his customers.

Today, kaiten sushi’s popularity has led to a global phenomenon, and restaurants utilizing the technology can be found in urban centers throughout the world. In Japan, it’s great for people on a budget, families with picky kids, and anyone in a rush to finish a meal. It’s also great for visitors who might be anxious about the language barrier, and it has become something of a tourist attraction in its own right.