The Unknown World of Male Geishas 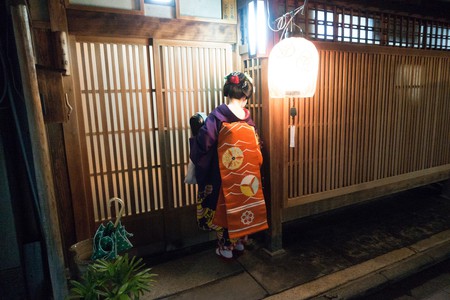 When it comes to iconic Japanese figures, there is really none more iconic than the geisha. Shrouded in mythical legends and misunderstandings, there’s a lot for outsiders to learn about the geisha, but one of the more interesting facts is the existence of taikomochi – aka the male geisha.

A brief rundown: What is a geisha?

Let’s begin learning about taikomochi by first looking at one of Japan’s most famous and mystical and misunderstood figures: the geisha. Though from an outsider’s perspective, geisha have been seen as ancient hostesses whose role in everyday culture is one of sexual innuendos and unspoken deeds, in reality, this is far from the truth. Yes, geisha are hostesses of sorts (in the non-sexual way), however that’s where the accuracies end.

In traditional and contemporary culture, geisha are hired to be like hostesses, part cultural tutor, part performer and well versed in the world of classical Japanese art and entertainment. An expert of culture, typically men would hire geisha as a way to both enjoy their time away from the stresses of work, but to also be guided through the world of Japanese culture. Educated conversation, dance, ceremonies, and company are the main reasons geisha were and continue to be hired by the wealthy. In almost every case (though it’s difficult to say 100%, because the world is full of exceptions), there is strictly no physical relationship between a geisha and her client.

The role of a geisha is difficult to explain to outsiders simply because in the Western world there really is no equivalent figure, which is possibly from where all the misconceptions stem.

It’s a very little known fact, but Japan’s original geisha were actually men known as taikomochi. It’s hard to believe given the level of femininity ascribed to geisha culture; however, the history of the male geisha dates all the way back to the 13th century.

Female geishas didn’t even exist until 1751. Known at the time as geiko, which translates to “arts child” (a term that’s still used in Kyoto today), female geishas became so popular that it took just 25 years for them to outnumber the amount of working taikomochi. During their peak, there were around an estimated 500-600 working taikomochi. As female company was more desired, and the fact that World War II brought with it great cultural change, the taikomochi rapidly became an endangered species. Today it’s said that there are only five taikomochi working in Japan, four in Tokyo and one in the geisha capital of Kyoto.

During feudal times, jester-like figures would entertain the people of the court and offer advice to the high-ranking lords. As the wants and needs of Japan’s royal families changed, so did the role of taikomochi; soon, rather than focusing on the arts, taikomochi performances became a lot more comical, which is perhaps why in some strange, connected way Japan has so many comedians today. Turn on the TV here in Japan, and you’ll see variety programs featuring panels overflowing with jokers keeping the live studio audiences in stitches.

Even though the culture of taikomochi is now something generally relegated to the history books, it’s interesting to compare their role with that of contemporary host clubs. With a little stretch of the imagination, Japan’s host club culture could be seen as a modern-day take on the taikomochi ideology.

A cultural quirk that is rather challenging for outside visitors to comprehend, male host clubs are a place where women pay for the company of fashionable, affable, fun-loving and good-looking men, whose primary role is to entertain. A majority of these types of establishments are located in the nightlife meccas of Japan, like Tokyo’s red light district of Kabuki-cho in Shinjuku.

An interesting fact unearthed by The Daily Beast notes the interesting comparison that today there are in fact a lot more more male hosts working the neon- and booze-soaked corner of Kabuki-cho than there are authentic female geisha working in all of Japan. Though, of course, there are a number of reasons for which male host clubs exist, it’s hard not to see an underlying connection.