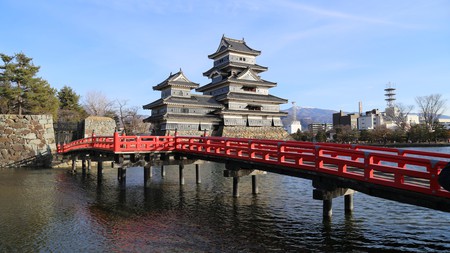 Known as Karasu-jo – or Crow Castle, for the way its black walls bring to mind the unfurling of dark wings – Matsumoto’s spectacular fortress is a designated national treasure, and one of the most beautiful sites in Japan.

It is estimated that once there were 5,000 castles in Japan. Today, however, only 100 remain, of which just 12 are considered original. Matsumoto-jo is acclaimed as one of the three finest castles in Japan and contains the oldest surviving keep in the country. A visit to this stunning site allows a glimpse into the chaotic 16th century that continues to shape Japan to this day. 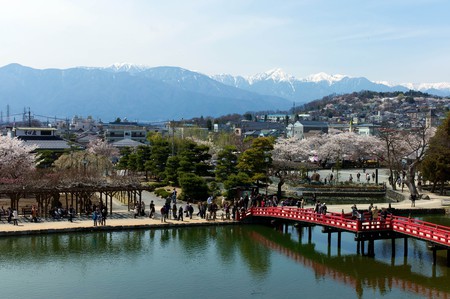 The warring states period and the construction of Matsumoto Castle

To understand Matsumoto Castle, it’s important to acknowledge the turbulent era of civil war in which it was built. The Onin War broke out in 1467, and for the next 130 years, the country was riven by conflict. But what started this war? Since 1337, Japan had been ruled by the Ashikaga shoguns, who exercised power in the name of the Emperor. Once a powerful warrior clan, by the time of the Onin War, the Ashikaga had become ineffectual rulers, more interested in courtly pursuits than holding Japan’s disparate and poorly connected regions together.

As the shogunate’s authority collapsed, former provincial administrators began to amass private armies to pursue their own ambitions. Kyoto, the ancient capital, was soon a smoking ruin, and from there, the conflagration spread. The new regional strongmen, now known as daimyo, began to fortify their homes, as well as key strategic points across Japan’s mountainous landscape.

The first fort to occupy the site on which Matsumoto Castle now stands was Fukashi-jo, built in 1504 by the Ogasawara clan who ruled Shinano Domain (modern-day Nagano). Unfortunately for the Ogasawara, this wealthy province was squeezed between the territories of two of the most ambitious warlords of the Sengoku Era, Takeda Shingen and Uesugi Kenshin. In a series of battles from 1542–1548, most of Shinano came under Takeda control, and in 1549, Fukashi-jo was attacked and captured.

The fighting that raged across Shinano during this period includes some of the most celebrated campaigns in Japanese military history, which have been endlessly commemorated in literature, woodblock prints and film. For an evocative glimpse of warfare at his time, Akira Kurosawa’s biopic of Takeda Shingen, Kagemusha, is a must-watch. 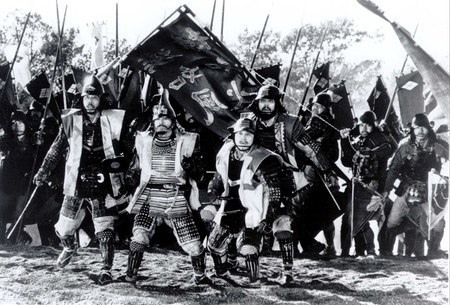 Evolution of the Japanese castle

For most of the Sengoku Period, castles still resembled the simple wooden fortifications used for hundreds of years, albeit larger, and more complex. It was not until the last 30 years of civil war that drastic changes would occur to bring about the emergence of a new type of castle, typified by Matsumoto-jo.

The catalyst for this development was the coming of the Portuguese to Japan in 1543 and the technological innovations they brought with them. Japan had long been familiar with gunpowder, but the arrival of more sophisticated and powerful firearms transformed Japanese warfare.

To better resist damage from arquebus (a long gun) and cannon fire, stone walls were adopted in place of wooden stockades. In 1576, Oda Nobunaga – one of the most powerful warlords in the country – began the construction of an enormous stronghold on the shore of Lake Biwa: Azuchi Castle. This was the first example of a revolutionary new type of fortification, built on a scale unlike anything that had come before and marked by its complex arrangement of concentric baileys of interlocked boulders arrayed around an enormous central seven-storey keep (tenshu).

Following Nobunaga’s lead, the use of these impressive central keeps spread throughout the country. Today, tenshu are so associated with the idea of the Japanese castle that they are mistakenly thought to be one and the same thing. While these imposing keeps were useful in battle as a means to watch over the castle grounds and beyond, their primary purpose was the symbolic display of power, meant to impress not only with their sheer size but also with their physical beauty and lavish ornamentation.

Superficially resembling European castles, Japanese fortifications developed into something more akin to mazes, the tall unscalable walls forcing attackers to travel around the compound in a spiral, through narrow lanes and up slopes, gradually approaching the central keep, while defenders rained down arrows (and worse) from the ramparts above. So effective were these measures that assaults were rare, and sieges consisted of little more than surrounding the fortification in the hope of the defenders exhausting their provisions.

In 1582, Oda Nobunaga’s forces, including a contingent of some 10,000 peasants armed with firearms, annihilated the once all-conquering Takeda cavalry at the Battle of Nagashino.

Nobunaga seized the momentum this devastating victory presented, going on to unite the country, bringing the years of civil war to a gradual close.

In the tenuous new peace, Fukashi-jo was rebuilt, and renamed Matsumoto Castle. Ishikawa Kazumasa, a close ally of the new ruler, was dispatched to govern Japan’s eastern provinces from the stronghold. It was Kazumasa and his son who built the famous black tenshu in its current form sometime between 1590 and 1594. 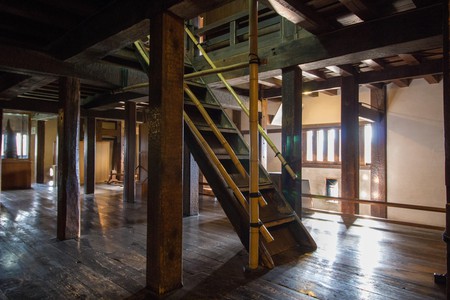 The golden era of castle construction proved to be brief. Threatened by the proliferation of these formidable structures, in 1615, the new Tokugawa Shogunate issued the Ikkoku Ichijo law, limiting each fiefdom to one castle only, and requiring the demolition of all others. Fortunately, Matsumoto was spared destruction.

For 280 years, the lords of Matsumoto governed Shinano province from within the forbidding walls of the massive complex. Today, only portions of the inner castle remain, but even this fraction gives an idea of how awe-inspiring the original complex must have been.

In 1872, following the Meiji Restoration, the castle was sold, but residents campaigned to save the keep from demolition and this and the inner moat were eventually acquired by the city government who undertook substantial improvements, turning the castle into the attraction it is today. The castle’s complex was designated a National Historical Site in 1930, and the keep was designated a National Treasure in 1936. 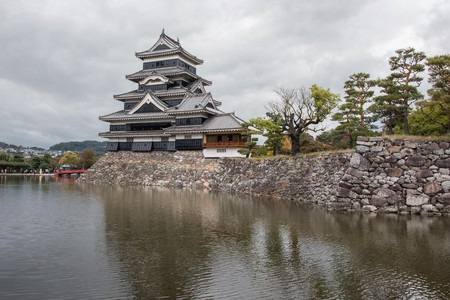 Matsumoto’s complete defences originally included an extensive system of inter-connecting walls, moats and gatehouses. Today, the only entrance to the inner castle grounds in regular use is the massive Kuromon Gate, and the tiles on the roof of the gate still carry the family crests of each of the 23 successive lords of Matsumoto.

Surrounded by a deep moat, the tenshu of the castle rises 30 metres (98 feet) above the Nagano Plain. The narrow wooden sama, once used by archers, offer glimpses of the magnificent snow-capped peaks of the Hida Mountains looming above the city to the west, while koi swim lazily in the moat below. The keep remains a menacing jet black, a colour originally chosen to demonstrate loyalty to Oda Nobunaga’s successor, Toyotomi Hideyoshi, who had painted his own fortress, Osaka Castle, the same colour. Inside the keep is an impressive collection of arms and armour from the Sengoku Period.

Typical of castles of the period, the number of floors inside Matsumoto-jo differs from the number implied by the external roofline of the building, a feature designed to confuse an attacking enemy force.

Although it is widely presumed that the castle lords lived in the tenshu, in peacetime the towers acted more like storerooms for arms and armour. Daimyo lived in a dedicated single-story structure known as a goten, the sole surviving original example of which is the Ninomaru Palace of Nijo Castle in Kyoto. In Matsumoto, the extensive outline of the once sumptuous goten can be seen in the grounds to the east of the keep. 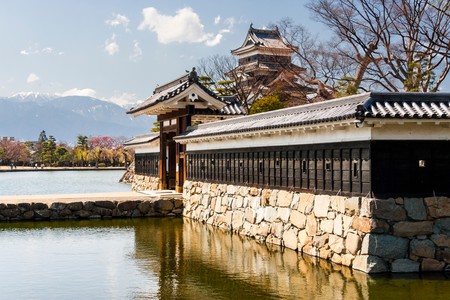 Matsumoto Castle is open daily from 8.30am–5pm. During cherry blossom season, the cherry trees on and around the castle premise are lit up after sunset. 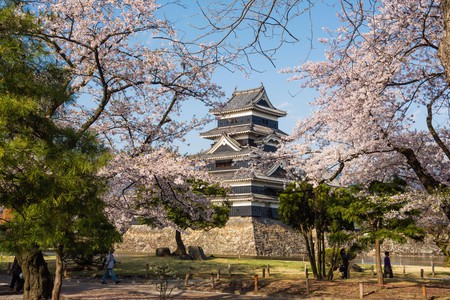