The Top 10 Things To See & Do In Yamanashi Prefecture, Japan

The second largest and lowest lake of the Fuji Five Lakes, Kawaguchiko Lake is located between Fujikawaguchiko and Minobu, within the borders of Fuji-Hakone-Izu National Park. Lake Kawaguchiko also has the longest shoreline, meaning it has breathtaking views, particularly on the northern side. Prior to 1914, the surrounding areas of the lake used to flood, as there was no natural outlet from the lake. However, a canal was built to connect the lake to a tributary of the Sagami River. The lake is a popular resort for tourists, with many water activities available, such as windsurfing, boat trips and fishing for carp and wakasagi. The lake is also used as a starting point for climbers of Mount Fuji during the season. The lake is listed on the UNESCO World Heritage List as part of the Fujisan Cultural Site. The lake is easily accessible with many direct trains and buses to and from Tokyo. 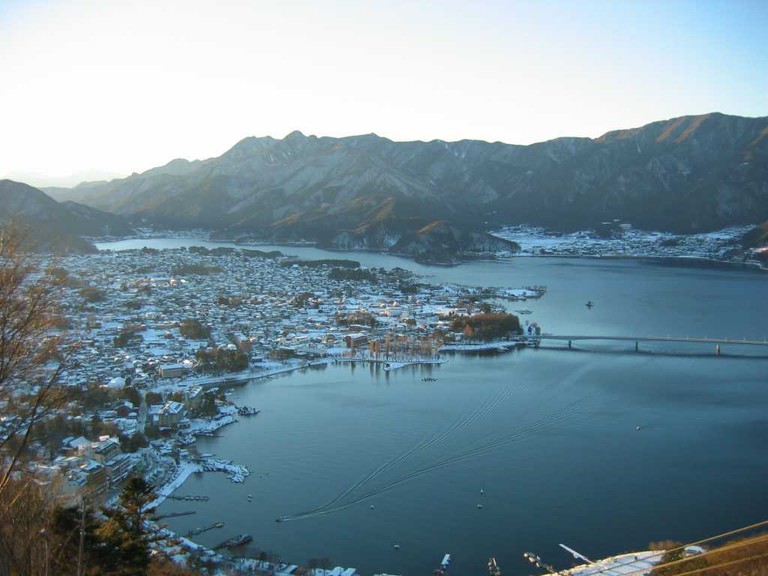 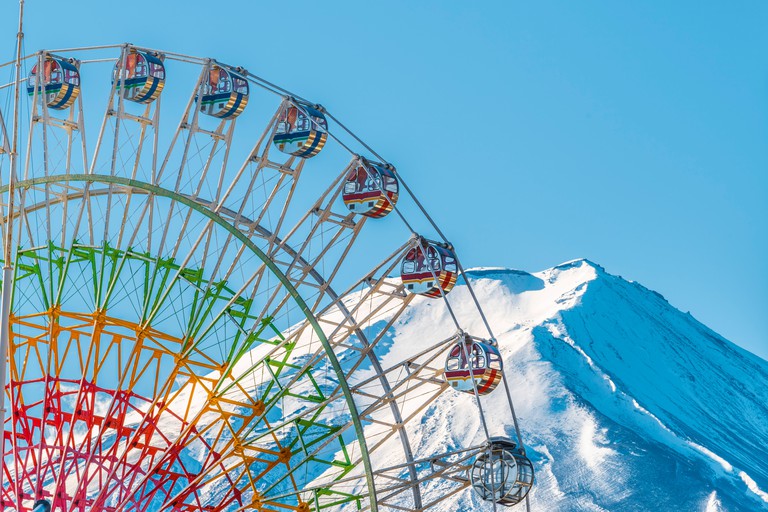 Fuji-Q Highland, Fujiyoshida, Yamanashi prefecture, Japan. | © Jon Arnold Images Ltd / Alamy Stock Photo
Book Now
Situated in the Fuji Five Lakes area at the bottom of Mount Fuji is Fuji-Q Highland, a popular amusement park. The park is famous for its record-holding roller coasters as well as its other elaborate and anime-themed rides. One of Japan’s most popular, the park is constantly adding new attractions and activities. There are four main roller coasters. Fujiyama, which was the tallest and fastest ride in the world when it was unveiled in 1996, Eejanaika, which has the most inversions of any roller coaster; Dodonpa, which holds the record for the fastest accelerating ride and Takabisha, which is the steepest roller coaster in the world. Other popular attractions include their anime-themed rides, their mazes and their Thomas the Tank Engine-themed area. In the winter months, there is also an ice rink on-site. Within and surrounding the grounds of the amusement park are a few other sites worth noting. The Fujiyama Museum contains artworks depicting Mount Fuji and can be visited by patrons with theme park tickets. The Fujiyama Onsen hot spring is also located nearby, with traditional style wooden baths and outdoor baths, providing an oasis of calm for tourists.
Open In Google Maps
5 Chome-6-1 Shinnishihara, Fujiyoshida, Yamanashi Prefecture 403-0017, Fujiyoshida, Japan
Give us feedback

Positioned on the eastern shore of Lake Kawaguchiko is the Mt. Kachikachi Ropeway. Ascending 400 meters, the ropeway rises to an observation deck located near the peak of Mount Tenjo. Visitors can take the ropeway as a round trip, or they can follow a hiking trail down from the observation deck through a forested mountain. Alternatively, visitors can take a different trail which leads them up a further 300 meters to a small shrine located at the top of the mountain. The observation deck is situated at more than 1000 meters above sea level, meaning it gives panoramic and spectacular views of nearby Mount Fuji and the lake lands below. There is also a hiking trail from the deck to Mount Mitsutoge, which is another popular route. The name of the ropeway comes from the folk story by Dazai Osamu. Based on Mount Tenjo, the story tells of a rabbit that gets his revenge on a thieving tanuki by setting him alight and dropping him into the river below. Cute animals decorate the ropeway, creating a link to this tale. 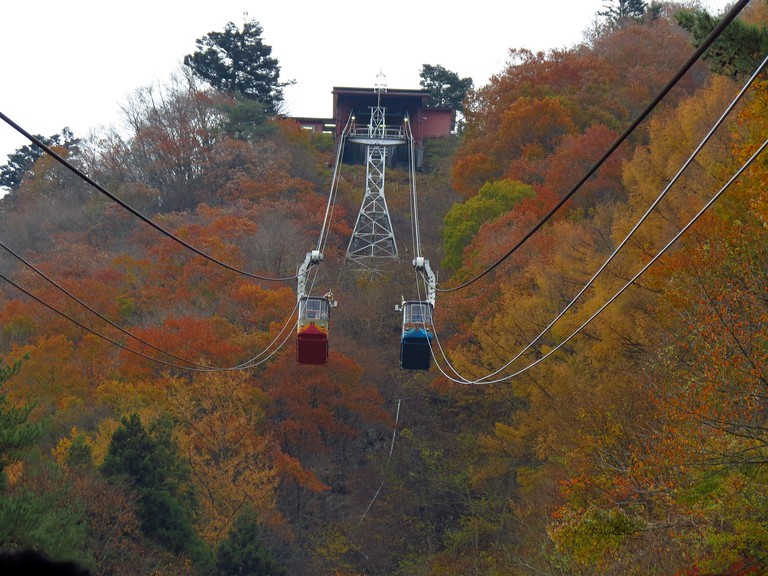 Also known as Yoshidaguchi 5th Station or Kawaguchiko 5th Station, Mt. Fuji 5th Station is positioned around the halfway point of the Yoshida trail. This trail leads from the Fujiyoshida Sengen Shrine at the bottom of the mountain to the summit of Mount Fuji. One of four 5th stations located on Mount Fuji, this station is perhaps the most popular. It can be easily accessed by trains and buses from Tokyo. The station is reached by using the Subaru Line, which itself is a popular sightseeing spot all year-round. The line is a toll road which travels up one of the lower northern slopes of Mount Fuji. The road begins in the town of Kawaguchiko, and shuttle buses take climbers from the town to the 5th station. The station itself is located at 2300 meters above sea level, meaning there are beautiful views of the area. Behind the shopping area is Komitake Shrine, which has an observation point, giving unobstructed views of Lake Yamanaka and Fujiyoshida City. The station is also the last place to buy food and hiking supplies before you ascend the mountain, where they become more expensive as you climb. 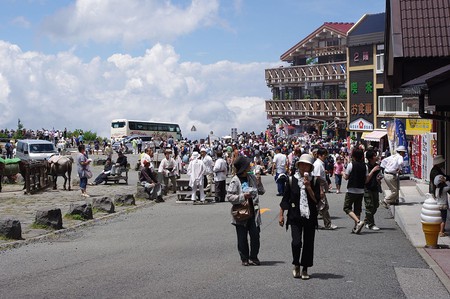 Fifth Station on the road to the top of Mount Fuji, Kawaguchiko side | © Jakub Hałun/WikiCommons

Kawaguchiko Music Forest Museum is a small theme park and museum that is entirely dedicated to musical instruments. In the main display hall, there is a collection of antique music boxes, organs and other automatic musical instruments from around the world. The main building of the museum is also used as a concert venue, where many famous classical musicians come to perform. A key feature of the museum is the large French fairground organ which dates from 1905 and takes up an entire hall to itself, playing every half an hour. Another key attraction is an orchestrion that is believed to have been on board the Titanic. Outside the museum and park are European-style gardens, which give scenic views of Mount Fuji and the surrounding lake. Visitors can walk among the gardens, following paths that weave around the lawns and a canal. The rose gardens outside are also popular amongst visitors, where several varieties of the flower can be seen. 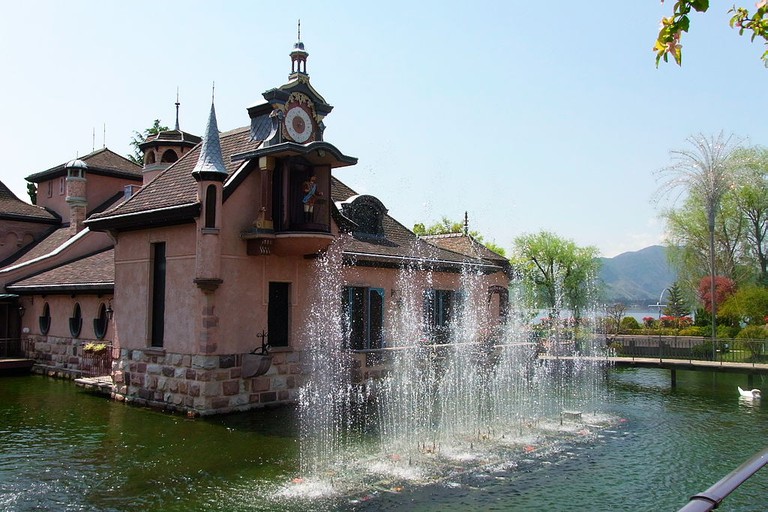 The fountain show on the hour every hour, at Kawaguchi-ko Music Forest Museum | © Yamaguchi Yoshiaki/WikiCommons

Lake Yamanaka is situated in the village of Yamanakako near Mount Fuji. It is the largest of the Fuji Five Lakes as well as being the highest and shallowest, with a depth of only 13.5 meters. The lake is part of the Fuji-Hakone-Izu National Park. It is also one of the highest lakes in all of Japan, at around 3,217 feet above sea level. The lake was formed by lava which flowed from Mount Fuji after an eruption thousands of years ago. The lake is also the only of the Fuji Five Lakes to have a natural output, with the lake drained by the Sagami River. Due to its location and amazing scenery, the lake is a popular destination for many water activities, such as fishing, water-skiing and windsurfing, as well as camping, with cabins dotted along the shoreline. The lake has a number of varieties of exotic fish as well as certain types of plant life. Visitors also flock to the lake as it is a hot spot for paragliding, as the lake provides a smooth take-off at Mount Myōjinyama. The lake was added to the World Heritage List as part of the Fujisan Cultural Site in 2013.

Founded by Nichiren in 1281, Kuon-ji is a famous temple located in Minobu. Today, the temple is the head temple of Nichiren Shū, playing an important role in training novices in the schools. The temple is also known as Minobu-san Temple after the mountain. Following Nichiren’s wishes, his ashes were brought back to the temple. These are enshrined in a mausoleum which is located on the grounds of the temple. To reach the temple, visitors must climb the famous 287 steps known as ‘The Steps of Enlightenment,’ which are walked by many chanting pilgrims all year-round. Inside the temple, the ceiling is decorated with a famous golden dragon with five toes, as it is a Japanese dragon. In the garden, there are thousands of cherry trees, with one tree dating over one hundred years old. Behind the temple is a cable car that brings visitors further up the mountain and to other temple buildings. The temple is a popular destination for tourists, with over 1.5 million people visiting each year. 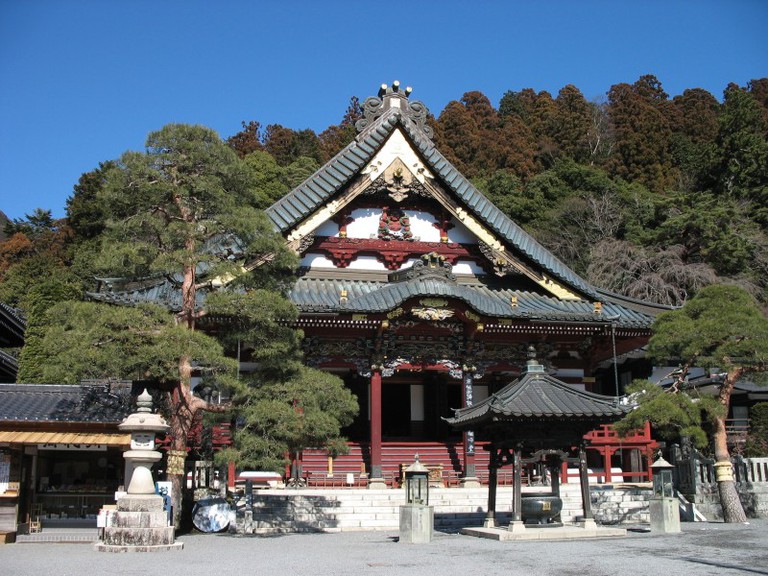 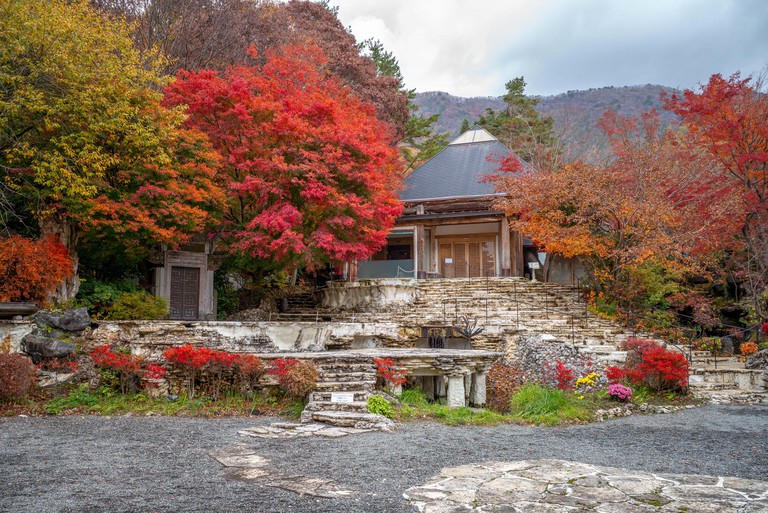 Kubota Itchiku art museum | © Jui-Chi Chan / Alamy Stock Photo
The Itchiku Kubota Art Museum opened in 1994 and showcases work of ‘Itchiku Tsujigahana’ by the famous Itchiku Kubota. Tsujigahana was once a common technique for dying kimonos during the Muromachi period, but the method was lost in the 17th century. When he was 20, Itchiku Kubota came across this technique, and after World War II, he devoted the rest of his life to studying tsujigahana. He held his first exhibition of works in 1977 at the age of 60 and was celebrated for his creation of beautiful designs. The success of this exhibition resulted in his work touring the world, before the museum dedicated to his works was opened. The museum itself has majestic views of Mount Fuji as well as the surrounding lakes. The main building of the museum houses the exhibition and features a complicated wooden structure that is made from Hiba trees, which are more than 1,000 years old. Also on-site are a Japanese tea house and a café, where tourists can take in the view of the neighboring waterfall.
Open In Google Maps
2255 Kawaguchi Fujikawaguchiko, Yamanashi, 401-0304, Japan
+81555768811
Visit Website
Give us feedback

When traveling in the city of Kōfu, make sure to pay a visit to Maizuru Castle Park. Located in this park are the ruins of Kōfu Castle, which is also known as Maizuru Castle. Identified as a Yamanashi Historical Site, the castle is believed to be around 400 years old, with construction beginning on the building taking place in 1583. Following the Battle of Sekigahara, the castle was taken over by the Tokugawa family, and it remained under their control until the end of the Tokugawa shogunate. During the early Edo period, the castle was given to Yanagisawa Yoshiyasu, who restored it and also developed the local town. However, during the Kyōhō period, the honmaru of the palace and the Akagenenmon Gate were destroyed by fire. The castle became abandoned, and during the 19th century, many of the major buildings of the castle were destroyed. While two of the towers of the castle have been reconstructed using ancient techniques, much of the castle has been dismantled or buried. There is a museum in the park that displays the history of the castle, as well as some artifacts. The castle is a must-visit for history buffs as it provides an insight into the area’s developement. 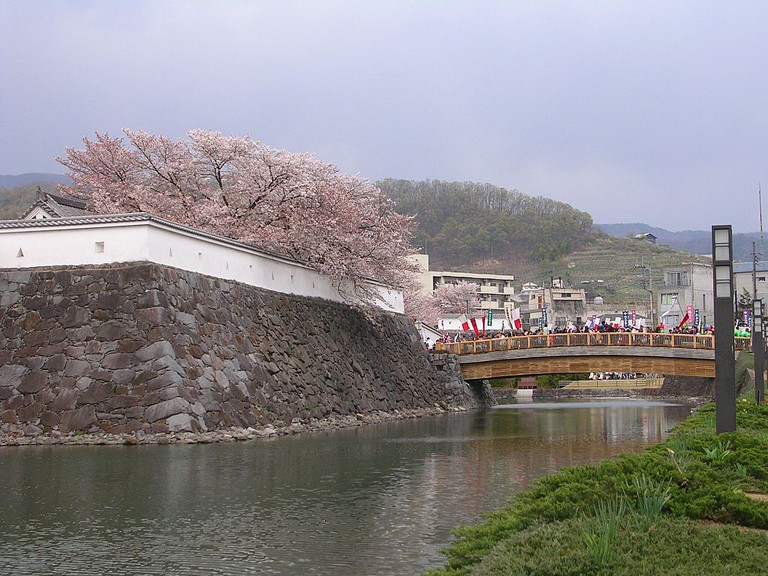 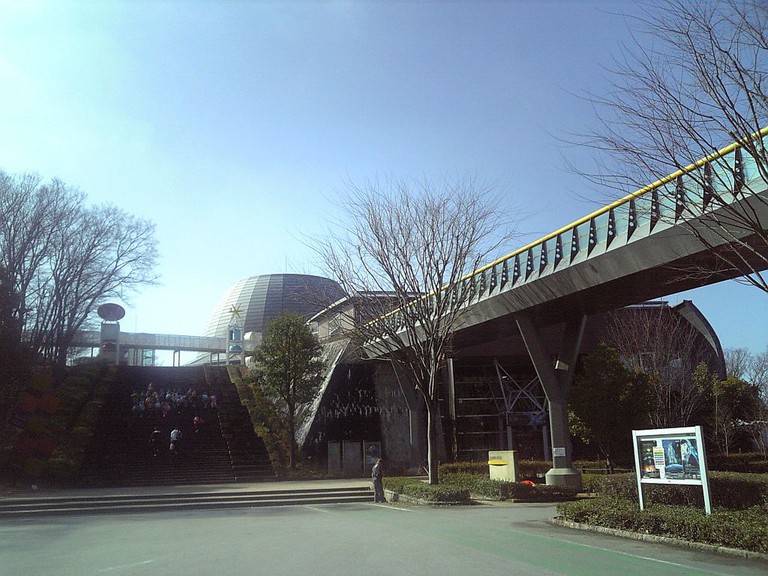 Yamanashi Prefectural Science Center | © さかおり/WikiCommons
Although small in size, science lovers must visit the Yamanashi Science Museum, located in the main city of Kōfu, just a 25-minute walk from the north exit of the main station. With exhibitions on astronomy and technology, the museum is a hub of learning and intrigue. Once housed in Maizuru Castle, the museum was moved to its present location in 1998 when renovation work was carried out on the castle. Popular attractions of the museum include its planetarium, the astronomical observation dome, an experience study room and the various exhibitions. Outside, there is a playground for children, and the surrounding areas have picturesque views. The museum is situated near the peak of Mount Atagoyama, which features views of the entire Kōfu Basin.
Open In Google Maps
1, 358, Atagomachi Kofu, Yamanashi, 400-0023, Japan
+81552548151
Visit Website
Give us feedback
Give us feedback