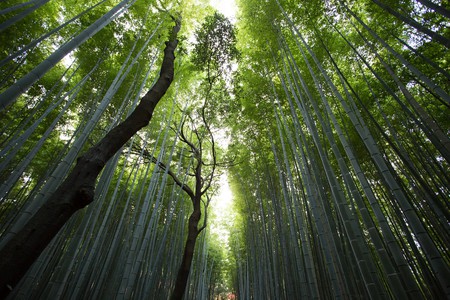 The Tale of the Bamboo Cutter (Taketori Monogatari) was written in Japan during the Heian Period in the tenth century. It tells the story of Princess Kaguya (Kaguya-hime). The princess was first discovered by a bamboo cutter, who split open a stalk one day to find her asleep inside. The story is a famous one, and has been brought into modern popular culture through television, books and even a musical performance.

One day while working in the forest, an old bamboo cutter splits open a shining stalk of bamboo to find a baby girl inside. Having no children of his own, the old man is excited and takes her home to raise her with his wife. They name her Kaguya-hime. Kaguya seems to possess magical powers, and she brings the family good fortune in the form of wealth. Soon she grows into a beautiful woman, and five princes and even the Japanese Emperor himself come banging down the old bamboo cutter’s door to ask for her hand in marriage. But Kaguya fends them off. 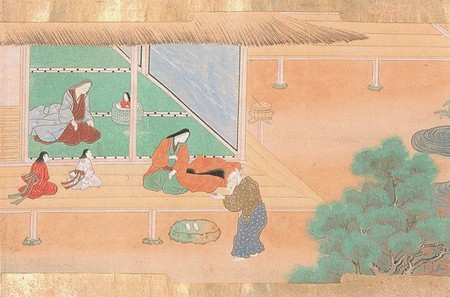 She begins to spend a lot of time looking at the moon, longingly. The family soon realizes that Kaguya is not of this world, and that she must someday return. She writes letters of farewell to her friends and family and leaves with the celestial entourage who come to collect her. The Emperor, distraught, hurries to the mountain to burn a letter to his lost love. The smoke from his letter explained the smoke rising from Mount Fuji, which was an active volcano at the time the tale was written. 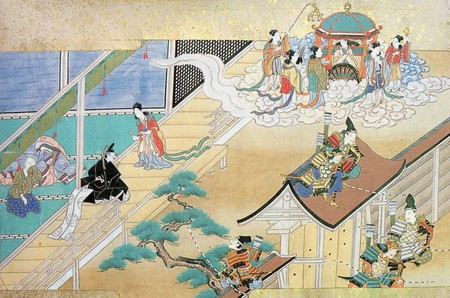 While not classified as such, the Tale of the Bamboo Cutter shares many similarities with fairy tales. For example, it’s common in fairy tales to name characters simply after their role in the story, like Grandmother or the Handsome Prince. In The Tale of the Bamboo Cutter, the old man’s name means Old Man Who Harvests Bamboo, while Kaguya’s full name means Princess of Flexible Bamboo Scattering Light, because she was discovered inside a shining bamboo stalk. The use of celestial or supernatural beings, handsome princes vying for marriage and the magical Elixir of Life are all elements similar to fairy tales as we know them. 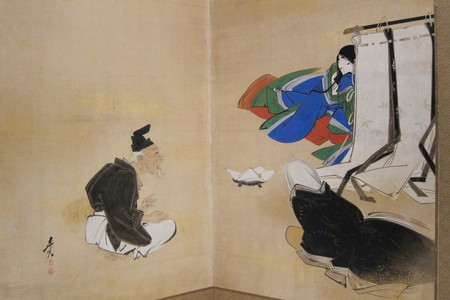 A scene from The Tale of the Bamboo Cutter | © Shibata Zeshin. photographed by Sharon Mollerus/Flickr

Princess Kaguya’s story has appealed to audiences for centuries. Studio Ghibli, an internationally-acclaimed production studio, released The Tale of the Princess Kaguya in 2013. The movie is based on The Tale of the Bamboo Cutter and was nominated for Academy Award for Best Animated Feature. One of the InuYasha series of movies was also based on the tale. In 2002’s The Castle Beyond the Looking Glass, an evil she-demon devours Kaguya as she is ascending to the moon. InuYasha and his friends must then defeat her to bring peace back to the mortal realm. Other well-known adaptations include the character of Kaguya from Capcom’s Okami video game and the manga-anime series Naruto.