The Style Guide To Rei Kawakubo: Everything You Need to Know 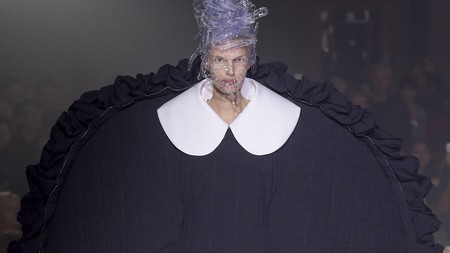 To call Rei Kawakubo is a revolutionary would almost be an understatement. The Japanese born designer created a universe that “gave comfort to the wearer and discomfort to the beholder.” The Japanese provocateur behind Comme des Garcons and Dover Street Market has developed a cult-like following throughout the years, emerging as a notoriously mysterious priestess to her gang of devoted followers. Culture Trip brings you a guide to the enigmatic designer.

How do you identify a Rei Kawakubo design?

According to Judith Thurman, it was Kawakubo who invented the black dress. The early days in particular highlight Comme’s raven aesthetic, with the iconic 1982 ‘Destroy’ collection in Paris featuring an all-black catwalk. Though the colour is often deemed as timeless, Kawakubo constantly tries to reimagine it in new contexts: “I wanted to find tomorrow’s black.”

Comme des Garcons' The Ceremony of Separation FW15, photo by PAOLO ROVERSI, head lace and make up by Julien D'ys

When Ronnie Cookie Newhouse asked Kawakubo “does creating around the human form put limitations on your work?”, the Japanese designer answered in a typically nonconformist fashion; “There are no limits.” Often ignoring the regularities of human form in her designs, Kawakubo uses copious amounts of material, inflating the garments to surreal proportions. Her collections names often allude to this practice, such as with the 1997 ‘Dress Meets Body, Body Meets Dress’.

Never one for careful experimentation, Kawakubo’s designs disregard any need for symmetry – or, indeed, the standardised ways of using the human body. Famous for her four-armed jackets or added ‘lumps and bumps.’ With Kawakubo you’ll almost always find padding in unexpected places, she explains that ‘”the idea was to concentrate, concentrate, concentrate, then to break any self-limiting formality down.”

Where was Rei Kawakubo born? She was born in Tokyo in 1942.

Where did Rei Kawakubo train to become a fashion designer? Though she studied art and literature at Keio University, she never went to fashion school. Judith Thurman explains that this was probably a good thing for the Japanese designer, who had “no preconceptions to unlearn, and no master to outgrow.”

How did Rei Kawakubo start her career? After graduating from university in 1964, Rei Kawakubo joined an acrylic fibre textile manufacturer, Asahi Kasei. She left to become a freelance stylist in 1967.

What is Dover Street Market? Dover Street Market, originally in London but now also in Tokyo, Beijing and New York, is a multi-brand retail store created by Rei Kawakubo. The designer told Dazed that she wanted “to create a market where people from all walks of life can encounter each other in an atmosphere of beautiful chaos.” By asking a selection of designers to display their designs with total freedom, Kawakubo made a unique space that regularly undergoes ‘tachiagari’, or a complete revamping of the store’s interior. “In Japan recently, Burberry opened a multi-million dollar flagship store. It will be the antithesis of that”, she asserts.

I never intended to start a revolution – New Yorker

You think I’m not normal because you’re looking at the clothes. But I am. Can’t rational people create mad work? – New Yorker

For me, creation can only come out of a certain kind of unhappiness. They say in Japan, this thing like the hungry spirit – the hungry mind – is what gets you going forward – Elle