The Seven Most Romantic Anime of All Time 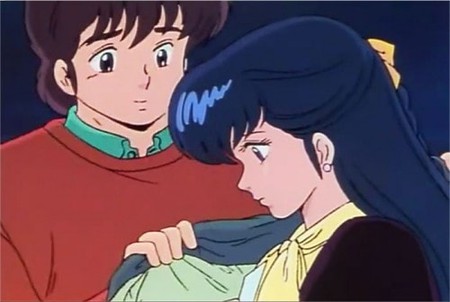 As yet another pagan festival hijacked by the church and/or capitalism, Valentine’s Day can either be an amusing romp or a demoralising slog depending on your outlook. If you feel like celebrating it this year, why not curl up with a box of Pocky and a loved one and check out the finest in romantic animation that Japan has to offer.

Pre-dating Spike Jonze’s Her by more than a decade, Chobits is the story of a lonely young man who develops a romantic relationship with his computer. Said computer takes the form of a Chi, a Kawaii android who also doubles as a sort of walking Macbook, capable of surfing the internet and other such computer-intensive tasks. As the two grow closer, the show explores what it means to love and grow close to someone, even if they have a hard drive where their internal organs should be.

You Should Watch It Because: Acclaimed production studio Madhouse does a great with the visuals in a tale that has plenty of heart and, pre-smartphones and wearable tech, was far more ahead of its time than people gave it credit for.

Imagine hugging the object of your affections only for them to turn into an animal from the Chinese zodiac. That’s the concept behind Fruits Basket, a story of love and the supernatural. Chipper high school student Tohru Honda befriends a family of pretty boys shortly after her mother dies in a car accident. What she doesn’t realise is that the family suffers from an astrological curse that will cause them to take the form of small furry critters when they are hugged by someone of the opposite sex. As Tohru-chan attempts to help the Sohma recover from their emotional wounds, she in turn discovers herself.

Why You Should Watch It: A regular presence in many romance anime best-of lists, thanks to great characters and a heroine who emphasises tenderness and compassion while never selling herself short.

From legendary creator Rumiko Takahashi comes an all-time classic, a bittersweet romantic comedy set in suburban Tokyo. Yusaku Godai is a well-meaning but slightly useless student, whose apartment block has a new manager in the shape of the beguiling Kyoko Otonashi, who is both young and recently widowed. Falling in love with her instantly, Godai-kun discovers to his continued frustration that the course of true love never did run smooth. Make sure you get comfy for this one, as the anime ran for 96 episodes as well as getting a feature-length spin-off and two live-action adaptations.

Why You Should Watch It: A fan favourite and one of Takahashi’s most enduring works, the show is charming, whimsical and makes for perfect ‘comfort food’ viewing. It also carries a gentle truth in its subtext, namely that falling in love is by no means a guarantee of a better or happier life.

Not to be confused with the ’80s Irish ambient popsters of the same name, Clannad follows the trials of embittered high schooler Tomoya Okazaki, who resents every aspect of his life until it changes forever when he crosses paths with fellow student Nagisa Furakawa. The quirky, gentle Furakawa makes Okazaki see his world differently, but young love isn’t known for its stability and these two are no exception, with their interactions becoming ever more dramatic as the narrative unfolds.

Why You Should Watch It: Based on the visual novel of the same name, Clannad is for those who like love stories with plenty of pathos and angst.

A dramatic stylistic departure for romantic anime, with not a high schooler or magical being in sight. The setting is London at the turn of the 19th century, and a young maid falls for a member of the gentry. In keeping with archetypes of stories set in the era, his family does not approve of their dashing son’s romance with a lowly servant, and the two attempt to get closer amid the rigid social structures and forced etiquette of the time. Emma is a cult hit in Japan, with its very own café in Tokyo’s Shinjuku, and it even triggered a resurgence in Victorian maid cosplay.

Why You Should Watch It: A refreshing change if you’re sick to death of angsty high schoolers and prefer a tale with, quite literally, a little more class.

Named after the speed with which cherry blossom leaves fall from their branches, this is a film with the sort of set-up usually found in a live-action independent movie. The feature is a collection of short stories based around the concept of time and distance, with each story revolving around a young man named Takaki Tono. To say anymore would be to spoil it, but the film met with critical acclaim in Japan and is widely regarded as a modern classic of its genre.

Why You Should Watch It: Unique and captivating, though a box of tissues should be kept nearby as heartstrings will be tugged to breaking point.

Junjou Romantica is an example of a subgenre known as yaoi – love stories involving relationships between beautiful men, and made mostly for a female audience although a male one is by no means discouraged (same-sex romantic manga and anime made specifically for men is in fact an entirely separate genre known as bara). The show revolves around the amorous ups and downs of four male couples, at times verging into slice-of-life territory as it finds profound life lessons in seemingly everyday goings-on.

Why You Should Watch It: Anyone new to anime who is tired of heteronormative storytelling will find something a bit different here, but most importantly the show is great fun, with a memorable cast of characters and relatable observations on the nature of modern relationships.