The Self-Obliteration Of Yayoi Kusama 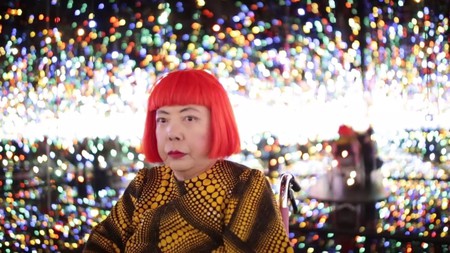 Nilesh Patel delves into the life and work of influential Japanese artist Yayoi Kusama. Here, he finds that her innovative artworks are inextricably bound to her own troubled life. 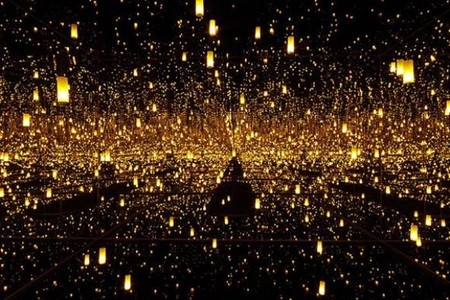 ‘One day I was looking at the red flower patterns of the tablecloth on a table, and when I looked up I saw the same pattern covering the ceiling, the windows and the walls, and finally all over the room, my body and the universe. I felt as if I had begun to self-obliterate, to revolve in the infinity of endless time and the absoluteness of space, and be reduced to nothingness. As I realized it was actually happening and not just in my imagination, I was frightened. I knew I had to run away lest I should be deprived of my life by the spell of the red flowers. I ran desperately up the stairs. The steps below me began to fall apart and I fell down the stairs straining my ankle.’ – Yayoi Kusama.

Welcome to the world of the Japanese artist, Yayoi Kusama. As a child, Kusama was physically abused by her mother and around that time, another world started to open up for her, a world of visions and hallucinations. In 1939, at the age of 10, she created the drawing Untitled. This piece shows an image of her mother’s face against a background, all of it covered in polka dots. The polka dots are not only representations of what she saw, but also symbolize the sun, moon, earth, the universe as a whole and, more importantly, the infinity of this universe. At such a young age, it was the start of Kusama’s representation of what she saw in her alternate reality and was the beginning of what would fill the rest of her life; a life-long exploration into herself, an ongoing obsession with polka dots, and various visual processes of how she could represent her own self-obliteration.

Naturally, from her creativity during childhood, Kusama went on to become an art student. She started off studying Nihonga, a traditional form of Japanese painting. During this period, Kusama expressed her visions and hallucinations through her art.

In 1955, she started a written dialogue with the American artist, Georgia O’Keeffe, moved to Seattle in 1957, and then relocated to New York to study at the Arts Students League. Kusama had her first exhibition at the Brata Gallery in 1959. Infinity Nets was an exciting exhibition that was novel in its minimalism, and avant-garde at a time in New York when Abstract Expressionism was the contemporary art form.

The pieces of Infinity Nets were an expression of infinite time, space and distance. This concept evolved from the canvas to full-scale installations in 1963 with Infinity Mirror Rooms, where one’s body would become fragmented and patterned onto the mirrored walls. Her three dimensional work continued during the Venice Biennale in 1966, installing 1,500 mirrored spheres in the gardens outside the main pavilion. From 1967 to 1969, Kusama moved onto painting and covering people with polka dots, most prominently during her active involvement in anti-Vietnam war demonstrations. This led to her opening her own boutique in 1969. Her signature style of polka dots and repetition grew rapidly and diversified in the 1960s. 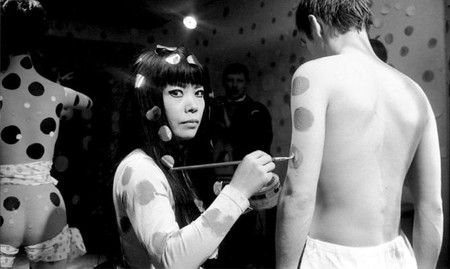 After a series of illnesses, Kusama returned to Japan in 1973, and underwent treatment for depersonalization syndrome. Upon her return to Japan, her creativity expanded further to include poetry and literary work. In 1977, she admitted herself into a psychiatric hospital in Tokyo and has continued to live there to this day. She has a studio in close proximity to the hospital so that she can continue to create. She has been a prolific artist over several decades and has delved into a variety of themes exploring her syndrome, including her Sex Obsession and Food Obsession series, Longing for the Universe, Accumulation Of The Corpses (Prisoners Surrounded by the Curtain of Depersonalisation) and End of the Universe.

Kusama is a pioneering artist whose enthusiasm spans into the whole manifestation of creativity, ranging from painting, writing, fashion, sculpture, silk-screening, dance, design, furniture and musical composition. She has had a profound effect on the world of art. Even before Andy Warhol’s iconic one-dollar bill pieces, Kusama was creating minimalist, repeated-image based work. Prior to Claes Oldenburg’s soft sculptures, Kusama produced them in the form of the phalli themed sofa and objects. Yoko Ono has noted Kusama as one of her influences. In 1993, she was selected to represent Japan in the Venice Biennale, and has had a large number of solo exhibitions around the world, including the Serpentine Gallery in London, the National Museum of Modern Art in Tokyo, and the Museum of Modern Art in New York.

Kusama’s work and identity as an artist are intrinsically intertwined. We can often see her photographed together with her art. She has said that if she did not have her art, she would have killed herself a long time ago. Kusama has dedicated her whole life to disassembling her identity and freeing the self. In many of her pieces, we can see her in the continual process of obliterating herself. Her polka dots are not only universal signs of the outer world of earth and stars, but are also signs of the inner world of cells. Her work goes from the inner to the outer and back again, killing the ‘I’ so that we can be set free and unified with the universe.

To put it in Kusama’s own words:

‘Our earth is only one polka dot among a million stars in the cosmos. Polka dots are a way to infinity. When we obliterate nature and our bodies with polka dots, we become part of the unity of our environment.’