The Historical Origins Of Karate 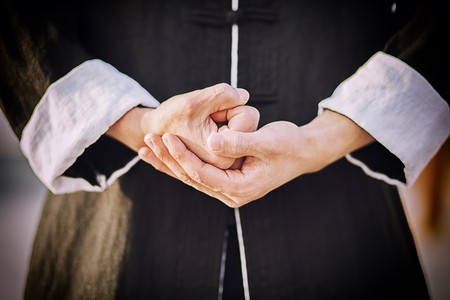 How did the influence of Chinese, Japanese and Okinawan martial arts help shape Karate into its modern form? Read on as we trace the history of Karate.

It is a common belief that Karate is a Japanese martial art. In truth, however, there is a Japanese strand of Karate which has descended from the original version of martial arts, the Okinawan Karate. Japanese Karate can be differentiated by the length of stances while the development of competition Karate has resulted in more elaborate movements and is often more about showmanship than practicality. 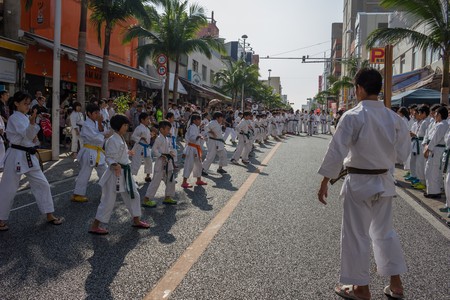 The Okinawan Karate of today has developed over centuries and was not the result of a single founder, as many schools of martial arts have been. Many masters contributed to the art’s development – hence it is a combination of Chinese martial arts (quanfa in Chinese and kenpō in Japanese). 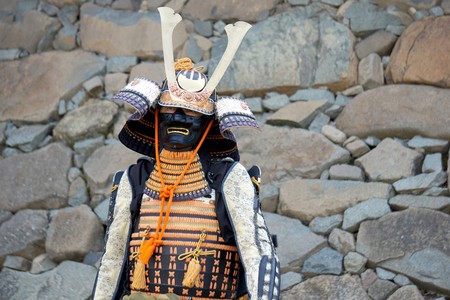 The ‘bushi’ of Okinawa were not a military force of the Kingdom. In fact, due to the weapons ban imposed in 1507 after the states of the Ryūkyū Kingdom were united (which discouraged classical fighting), there was no proper military force, and so the term ‘empty hands’ was fostered. This was not when karate first began to be developed, however.

In 527 A.D, Bodhidharma (a Buddhist monk known by Daruma in Japanese) traveled from India to China’s Henan Province to impart the teachings of Buddhism to the monks of the Shaolin Temple. The Shaolin monks were too weak to endure the long hours of meditative practice, however, so Bodhidharma taught exercises that would strengthen their bodies and minds. These exercises formed the basis of the Shaolin boxing styles comprising of external and internal methods. These systems found their way to various parts of China, including the Fujian Province in the South. 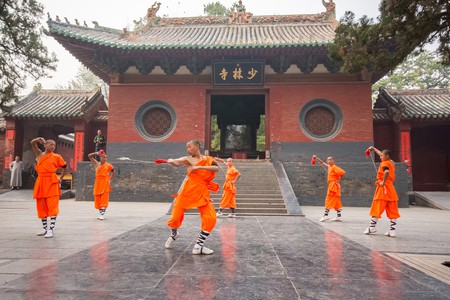 It was in Quanzhou in Fujian that a monastery is believed to have once existed, but was subsequently destroyed by the Qing Emperor Yong Zheng. The monastery has been in the process of rebuilding since 1992. It is plausible that the Quanzhou monastery did exist since Okinawan Karate is related to two schools known as Shōrin Ryū and Shōrei Ryū. The former refers to Master Matsumura’s Karate lineage as well as the Northern Temple of Shaolin. The latter refers to Southern Chinese martial arts which were largely brought back to Ryūkyū from Fuzhou in Fujian, as writings describe. 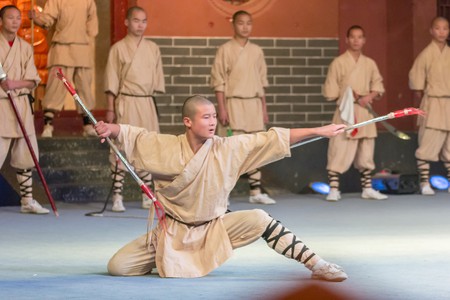 Shōrin Ryū and Shōrei Ryū are also called Shaolin Liu and Shalian Liu, meaning Shaolin style and Shalian style, respectively. Shalian style refers to the Shalian Temple which strongly supports the belief that there was a Southern monastery in Quanzhou, much like the Shaolin Temple of the North. Even if quanfa was only brought to Okinawa from Fuzhou after the Shalian Temple was no more, the monastery is certainly related to the systems. Yet it is possible that before it was destroyed, envoys that traveled to Okinawa from China may have taken monks of the Shalian Monastery with them.

Since the Ryūkyū Kingdom became a key trading post because of its proximity to Japan, China and Taiwan, Okinawan culture was greatly influenced by its neighbors, particularly the Chinese. It was thus inevitable that Chinese martial arts would find their way to Ryūkyū. It is difficult to track a precise history of the martial art because Karate was shrouded in secrecy for centuries. There are consequently very few written records supporting the art’s development.

Karate was not developed by peasants and farmers as they would not have had the time to study such things. Moreover, they were of the appropriate station to meet the Chinese envoys, the sapposhi, who traveled to Okinawa and brought aspects of Chinese culture back with them. It is also unlikely that they traveled to China with the trade ships to study the martial arts. However, there were so-called ‘commoners’ who studied karate initially under Okinawan masters and elevated their position to serve various kings at Shuri Castle. 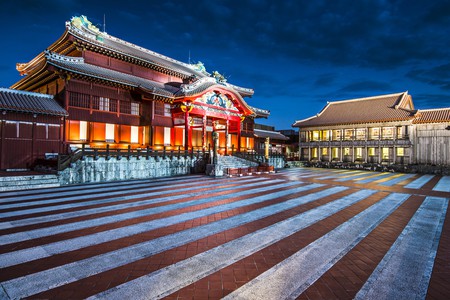 There is a story of the second generation master Shigetaka of Jigen Ryū Kenjutsu, who was asked to teach farmers and peasants to be able to defend themselves with farming implements, a practice which is equivalent to kobujutsu―it is not known whether they are related. It may be that either Okinawan kobujutsu influenced the decision for Master Shigetaka to teach the Japanese farmers, or the actions in Japan influenced the Okinawans. It is believed, however, that kobujutsu was purely formed in Okinawa as a reaction to the 1507 legal changes, pre-dating Master Shigetaka. Japanese influences are most likely to emanate from much earlier and have a connection to the weapons practices prior to the changes of law in the Kingdom.

The Okinawans once practiced both unarmed and armed combat openly. This was in the time of conflict between the provinces of Ryūkyū, prior to 1429. Military capability had developed through tribal developments and from the Japanese of the Heian Period, travelling to Ryūkyū and returning with the knowledge of swordsmanship and archery. 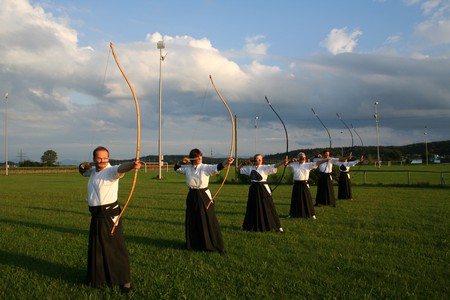 In 1509, it was King Shō Shin who put an end to the feudalistic period of the Ryūkyū Kingdom through the Act of Eleven Distinctions, which prohibited the stockpiling and possession of weapons. As a result, unarmed combat began to be cultivated more vigorously.

It was before this in 1372 that the Chinese made contact with Ryūkyū for the second time in over 700 years, establishing the most powerful domain of the island, Chūzan, as a tributary colony. Consequently, in 1393 the Chinese mission known as the “Thirty-six Families” was established in Kuninda, Naha. It is plausible that the Chinese would have transmitted some of their knowledge of martial arts during this mission.

Another possibility is that exchange students in China (ryūgakusei) learnt Chinese martial arts and took these back to Okinawa. Additionally, within the class system of the Kingdom, the pechin were responsible for law enforcement. Thus, the chikusaji pechin (‘street cops’) were responsible for law enforcement while the hiki (‘garrison guard’) would guard the King and the castle, essentially acting as Okinawa’s military. The people holding these positions would have been at least partially responsible for cultivating Ryūkyūan martial arts. 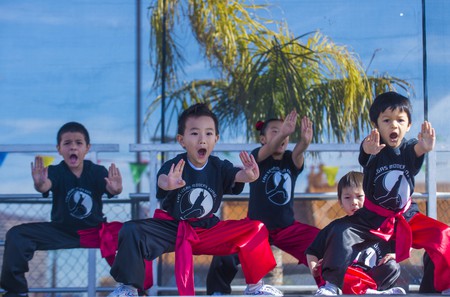 In 1609, the Satsuma clan of Kyūshū, Japan, invaded and seized control of Ryūkyū. The clan held power over the Ryūkyūan kings for 270 years. When the Satsuma took power, they prohibited the practice of all martial arts by the Okinawans. It is said that the Okinawans fought fiercely before the Satsuma samurai over-powered them.

Kobujutsu would probably have existed at the time, permitting effective defence against the samurai. The bushi also could have taken the weapons of the samurai to use against them. Nonetheless, they were not successful in defending their island from the Japanese, so Karate became shrouded in secrecy during the Satsuma occupation. 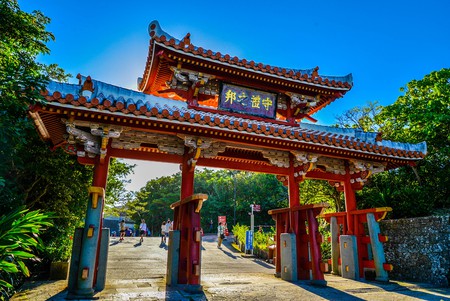 Rather than ceasing practice, martial artists began to study at night in darkness to continue to preserve their fighting arts without easily allowing others to see them practising. Only Okinawans knew that the art was practised.

Although the dual concept of kenpō and te together as karate had not yet been developed, both were present by the time of the Satsuma occupation. ‘Karate’, in its embryonic form, evidently existed from the 15th or 16th century.