The Most Popular Breweries and Distilleries in Japan 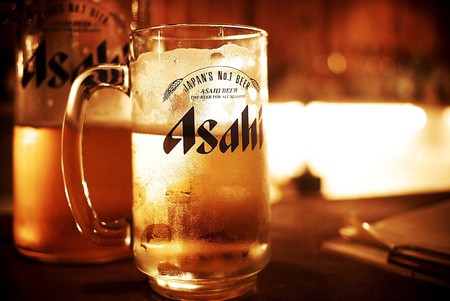 Chill and watch sports at The Bad Penny | © pittaya / Flickr

Along with some of the finest cuisine in the world, Japan also has some of the best booze. Here’s our guide to the best, biggest or most important producers of alcohol in the country.

Japanese whisky is regarded by aficionados across the globe as the best in the world, and the house of Nikka is one of its great institutions. It has a fascinating history, as founder Masataka Takeretsu learned his trade – and fell in love – while studying the craft of distillery in Scotland. Today, the company has two main sites: the Yoichi distillery in Yoichi, Hokkaido, and the Miyagako distillery in Miyagi Prefecture, Northern Honshu. As a means of repaying the love, the company also owns the Ben Nevis distillery in Fort William, Scotland. Takaretsu was one of two men responsible for making the Japanese whisky the global success it is today, and his adoptive son Takashi is now running the business.

Asahi is a titan of Asian beverages, and one of the most successful companies in Japan, worth nearly US$17 billion as of 2017. Founded in 1889, it made use of German prisoners of war, who worked at its brewery in Osaka during the First World War. Asahi’s distinctive silver label is a near-ubiquitous sight at bars and restaurants across Japan, as its super-dry lager is versatile enough to accompany everything from ramen to sushi. Asahi owns a formidable number of breweries across the globe, including Grolsch, Peroni and Meantime. It also owns such popular beers as Poland’s Tyskie, the Czech Republic’s Pilsner Urquell and and Hungary’s Dreher. So entrenched is the business in beer-making and selling that Asahi’s headquarters in Tokyo is a landmark building that is designed to look like a glass of the amber nectar.

Shinjiro Torii is the other legendary patriarch of Japanese whisky. Having originally run a shop selling imported wines in the late 19th century, he eventually moved into the distillery business and would go on to form the legendary Yamazaki distillery outside Osaka in 1923. Initially named the Kotobukiya Company, it changed its name to Suntory in 1963, after the popular brand of whisky it produced. Since then the brand has gone from strength to strength and, like Asahi, is an unstoppable beast gobbling up other brands and drinks, including Orangina and the beverages division of British GlaxoSmithKline, giving of control over such fizzy pop mainstays as Lucozade and Ribena. Recently it also acquired US bourbon giant Jim Bean for a whopping US$16 billion.

Sapporo has one of the longest and most venerable histories of any of Japan’s main breweries. Its origins can be traced all the way back to the Meiji period, when German-trained brewer Seibei Nakagawa took up his position as first-ever brewmaster of the Kaitakushi Brewery in the summer of 1876. The fruit of his endeavours was a dry, crisp lager that caught on with the public, named after the capital city of Hokkaido. The company was privatised in 1886 and officially named the Sapporo Beer Company. In 1906, it would merge with the Asahi and Yebisu breweries to become the Dai-Nippon Beer Company Limited, dominating the market until just after the Second World War. In 1956, the merger dissolved, and the respective companies eventually went back to their former titles. Yebisu eventually became its own brand by 1976. Like many such brands sold outside Japan, much of Sapporo’s beer sold internationally is brewed under licence in other countries.

Starting out as the Japan Brewery Company, the firm that would eventually become Kirin was first established in 1885. The company assumed control of assets belonging to the Spring Valley Brewery, which was first founded in Yokohama in 1869 by a Norwegian-American brewer named William Copeland. The first Kirin beer made its way to consumers in 1888, and by 1907 the Kirin Brewery Company was its very own entity. Taking its cue from Japan Brewery, it used malted grains and hops imported from Germany and even employed German brewers to oversee production of its product. Named after Qilin, the chimeric Chinese animal, its two most popular beers in Japan are Ichiban Shibori and Kirin Lager. Here’s Harrison Ford popping up in a mid-’90s commercial for the latter: