The Most Beautiful Sculptures in Kyoto

With its numerous temples, shrines, and places of historical and cultural significance, it’s no wonder that Kyoto has so many lovely sculptures available to the public. Here are the best sculptures you can see in the city, and the stories behind them.

If you visit the lush slopes of Arashiyama, the hills lying to the west of Kyoto city, you’ll find the Otagi Nenbutsu-ji temple. Standing all over the temple grounds, are 1,200 statues of rakan, the original disciples and followers of the Buddha, carved from stone and covered with moss. They were carved decades ago by believers who worshipped at the temple, and were donated as a blessing. Due to the many different sculptors involved in the project, many of whom were amateur, all the statues have different expressions, poses, and artistic styles: they may be praying, laughing, holding birds and even goblets. These differences add a touch of magic and whimsy to this lovely temple, making it a true hidden treasure.

Watch out for: the different expressions of the rakan

Statue of Izumo no Okuni 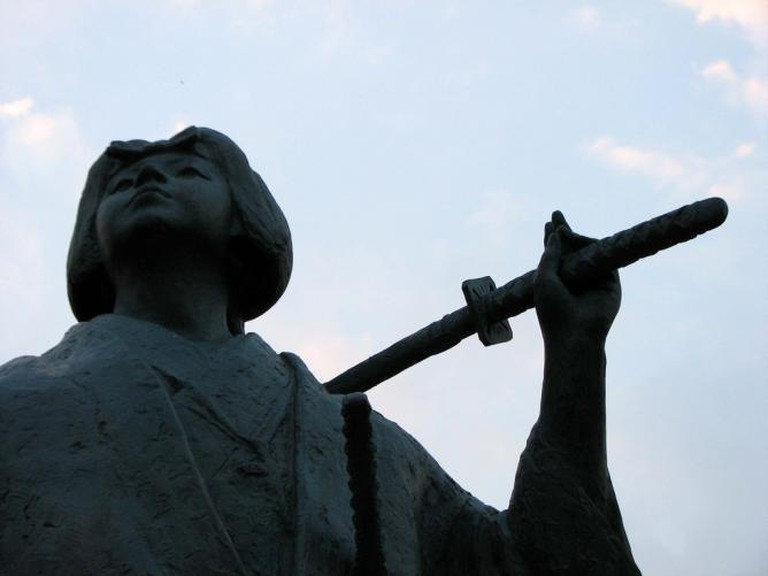 Izumo no Okuni | © Chris Gladis/Flickr
If you reach Gion by crossing the Kamo river, you’ll find a statue of a dancing woman dressed in traditional attire. Located near the Shijo-Ohashi Bridge, at the entrance of Gion Shijo, this statue was erected as a tribute to Izumo no Okuni, a 16th century miko (shrine maiden) who is believed to be the inventor of Kabuki, a form of dance-drama known for its bizarre elements. This statue is located by the Shijo-Ohashi Bridge, near Shijo, where Izumo no Okuni performed, and Gion, the district of geishas.

Watch out for: the view of Kyoto across the river
Open In Google Maps
Kyoto, Japan
Give us feedback 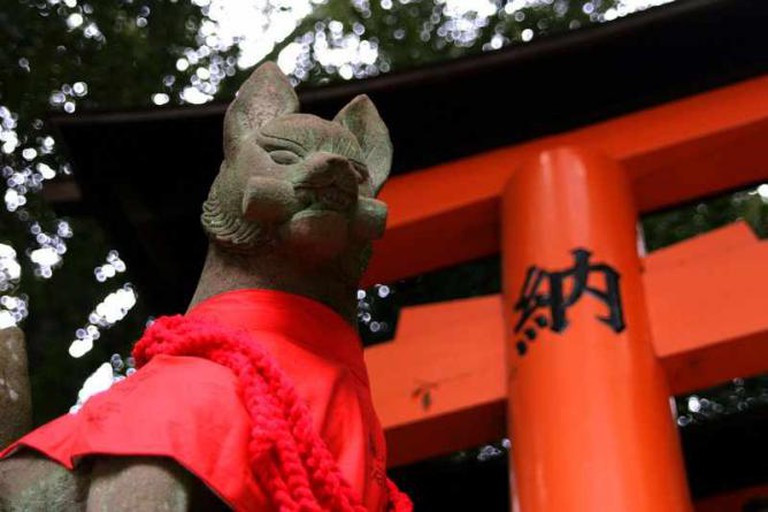 Fox statue at Fushimi Inari Shrine | © L Welling/Flickr
Statues of foxes can be found all over the grounds, temples, and sub-temples of this beautiful Shinto shrine, from the guardian statues on either side of the gate to a fox-shaped fountain. This is because this ancient shrine is the head shrine of the Shinto deity Inari, the kami(or spirit) related to harvest, rice, tea, and fertility. Foxes are said to be Inari’s messengers, hence the many statues and representations of them in this shrine. One of the oldest shrines in Kyoto,the Fushimi Inari Shrine is the first Inari shrine, as it dates back to the early 8th century AD, predating the arrival of Buddhism in Japan and the establishment of Kyoto as the nation’s capital. Surrounded by lush mountain greenery in summer, flaming leaves in autumn, and snow-spotted ground in winter, the majestic stone foxes look almost lifelike.

001 Kannon statues at the Sanjusangen-do Temple

This Buddhist temple, located in the Higashiyama Mountains, was declared a National Treasure because of the 1,001 Kannon statues it houses. Kannon, formally called Kannon Bodhisattva, is the Buddhist goddess of mercy and one of the most important deities in Japanese Buddhism. The temple boasts a thousand and one statues – a single towering wooden, many-armed Kannon is accompanied by 1,000 man-sized Kannon statues. The statues were all sculpted in the 12th and 13th centuries, and have stood guard at the temple ever since.

The samurai statues at Maruyama Park 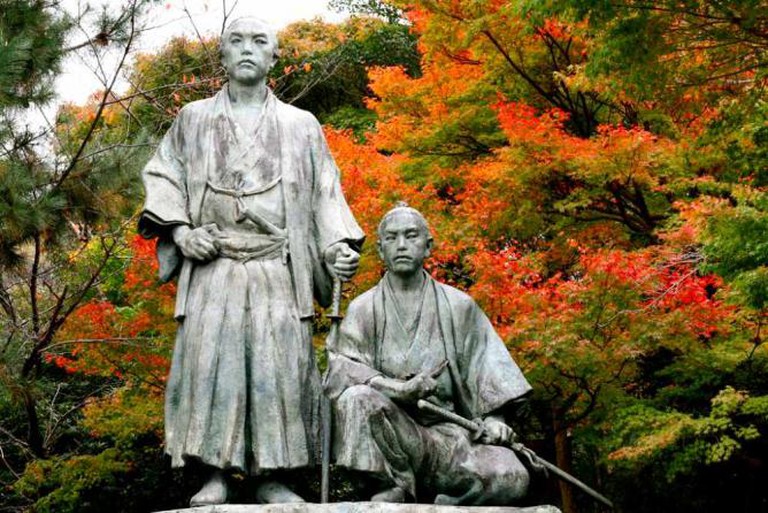 Sakamoto Ryoama and Nakaoka Shintaro | © Sarah-Rose/Flickr
You may have heard of Maruyama Park, Kyoto’s most famous place for seeing the city’s beautiful cherry blossom trees. But a less well known aspect of the park is the bronze statue of two samurai, erected in honour of Sakamoto Ryoma and Nakaoka Shintaro. These two samurai activists were assassinated in Kyoto in the 19th century, whilst opposing the Tokugawa shogunate’s feudal rule. As visionaries who dreamed of an equal society free from the limitations of a feudal government, Ryoma and Shintaro are now honoured as martyrs.

Watch out for: the details of the sculpture
Open In Google Maps
Maruyamacho, Higashiyama Ward Kyoto, Kyoto, 605-0071, Japan
+81755611350
Visit Website
Give us feedback
Give us feedback