The Japanese Designers Pushing the Boundaries of Streetwear 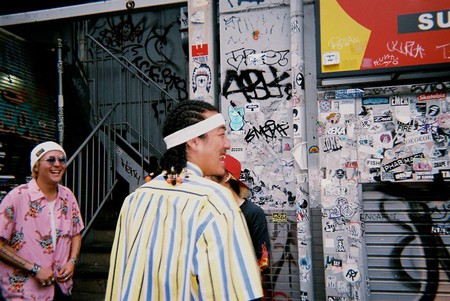 Food, transport and fashion are three things that Japan arguably does best, with Tokyo today’s trendsetting capital. Trailblazing designers like Rei Kawakubo, Issey Miyake, and Yohji Yamamoto have paved the way for many local labels to follow suit. Here are the top names pushing the boundaries of streetwear today.

Casual streetwear fans will have come across the name Sk8thing, whether intentionally or not. Having worked with names like BAPE, the Pharrell label Billionaire Boys Club and Undercover, the Japanese fashion icon is responsible for some of the biggest cross-cultural breakthroughs in the fashion world. But it’s Cav Empt, his label collaboration with British designer Toby Feltwell, that is really the crown jewel in his streetwear empire. Featuring bold graphics and easy to wear, cozy apparel Cav Empt is a ‘must own’ name for any streetwise fashion lover.

S/S 17 Lookbook Now on CAVEMPT.COM and in C.E SHOP TOKYO

Have a Good Time

It’s their laid back, fun-loving attitude that makes Have a Good Time one of the most sought after labels on the local streetwear market. Formed from a collective of graffiti artists, the Have a Good Time crew release hoodies, pullovers, beanies, tote bags and of course t-shirts emblazoned with the bold and instantly recognizable Have a Good Time graphic. If you’re around the trendy inner Tokyo suburb of Nakameguro, you can check out their store too, stocked with books, toys, and enough skate apparel to keep you looking fresh for years.

Though still relatively new in the sneaker game, Flower Mountain is one label worth keeping an eye on. A collaborative effort between Chinese footwear icon Yang Chao and Japanese designer Keosuke Ota, their shoe designs focus heavily on simple silhouettes featuring print-heavy designs. Drawing influence from natural surroundings, they’ve released a string of unisex sneakers that are the perfect understated statement shoe for the warmer months.

This shoe label gives sneaker geeks the opportunity to delve into a world deeper than the major brand names. The brainchild of Tokyo-based designer Ryo Kashiwazaki, Hender Scheme produces more than just sneakers – it’s their artisanal leather crafted tributes to iconic sneakers like the Reebok InstaPump Fury, Timberlands, and Jordans and Air Force 1s that have made them major players in the streetwear game.

Founded in 1990 by designer Jun Takahashi, UNDERCOVER has set a pretty high precedent for streetwear in Japan. Known for combining elements of streetwear and high-end fashion with a punk-influenced direction, the label was founded on the idea of pushing social, cultural and artistic boundaries: their motto is “we make noise, not clothes”. Wanting a slice of the avant-garde action, major labels like Nike and Uniqlo have sought out Takahashi’s talent for collaborations in recent years.

Founded in 1999 by Chitose Abe, Sacai has become local fashion cult hero both here in Japan and across the world. After cutting her teeth as a pattern-maker for the iconic Comme des Garçons label, Abe created Sacai as a way to challenge and reinvent the way in which women’s clothing was created. The label produces clothing that balances a powerful female aesthetic without being overly masculine. Focusing on texture, many of Abe’s creations juxtapose contrasting fabrics to produce new experimental creations.

Created by Tetsu Nishiyama, what WTAPS does best is its ability to reinvent streetwear staples without straying too far from the original. Think consistent design, premium cotton and easy to wear, super clean apparel and you’ve got WTAPS. Not shy to collaborate, Nishiyama has worked with BAPE founder and fellow Japanese street wear icon NIGO.

The creation of designer Junichi Abe, Tokyo-based label Kolor has made waves both here in Japan and internationally since its birth in 2004. What’s so exciting about Kolor’s design ideology is the label’s focus on mixing the classic everyday with the slightly offbeat. Whether it’s through a slightly asymmetrical silhouette, eye-catching colour scheme, or new texture, Kolor produce the perfect statement wear for those not trying to be too outlandish – so very Tokyo.