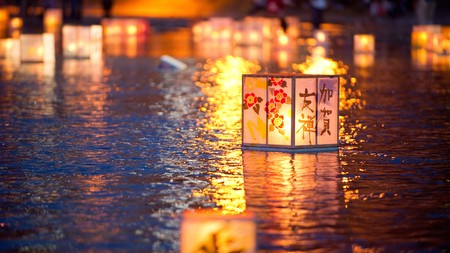 Toro Nagashi, the Japanese lantern festival, is one of the country's most fascinating and beautiful ancestral traditions | © mikecranephotography.com / Alamy

The hauntingly beautiful festival of Toro Nagashi (literally, “floating lanterns”) is one of the major events in Japan’s yearly calendar. Each August, thousands of Japanese lanterns are floated on rivers, traditionally to celebrate the end of O-bon, a Buddhist festival. Here’s the low-down on the lantern festival’s history and how to take part as a visitor to Japan.

For three days in late August each year, Toro Nagashi sees thousands of Japanese lanterns set afloat at dusk to commemorate the souls of the dead. The resulting scene is a spectacular play of light and dark as the lanterns’ glow slowly fades into the distance.

In terms of the most observed celebrations in Japan, Toro Nagashi is second only to New Year’s Eve. Japanese people will typically take time off work to travel home and participate. Toro Nagashi can be a smaller family affair to remember lost loved ones or a much bigger event to memorialise those who have been lost to natural disasters or war. 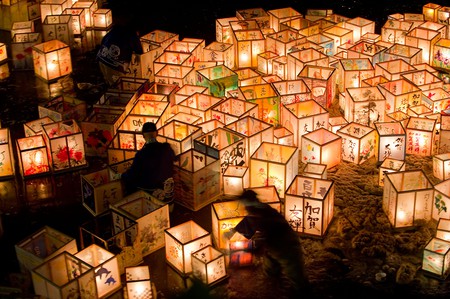 What happens at the Toro Nagashi Festival?

During O-bon, it’s believed that the spirits of deceased ancestors return to their homes for a short period. A mukaebi (“welcoming fire”) is lit so that the ancestors can easily find their way home. Talk of the year’s happenings, such as births or new jobs, is then shared with the ancestors by visiting their graves and leaving offerings of food there.

Toro Nagashi officially begins at the moment the ancestors commence their return to the spirit world. Families come together to guide the spirits down to the sea using traditional candle-lit lanterns (toro). In the Japanese belief system, all humans originally came from water, so the lanterns visually represent the spirits’ return to the elements. 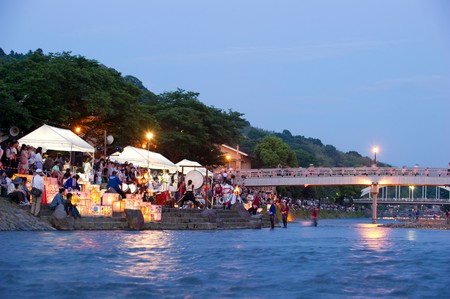 Each year, families come together to guide the spirits down to the sea using traditional candle-lit lanterns | © mikecranephotography.com / Alamy

Why is Toro Nagashi sometimes called the Festival of Recovery?

Toro Nagashi is often referred to by the alternative name of the Festival of Recovery, which ties into the sad origins of the custom. It was first held in 1946 as a way to commemorate the lives lost in the US bombings of Tokyo and other Japanese cities during World War II. This is why you’ll find bigger public Toro Nagashi festivals at places such as Hiroshima, where 10,000 lanterns are set afloat. In Tokyo, the Asakusa celebration, held on the Sumida River, commemorates those lost to the Great Kanto Earthquake of 1923.

Toro Nagashi is often referred to by the alternative name of the Festival of Recovery | © mikecranephotography.com / Alamy

As Japanese festivals go, it’s actually very easy for visitors to take part. If you want to do more than simply witness the lanterns’ journey downstream, you can bring your own lanterns or buy them ready-made for around ¥1,500 (£10). At most major festivals, you’ll find tables set up where you can decorate your lantern with pictures and wishes. At the Asakusa festival, for example, you’ll find the workshop area next to the place where you buy the lamps.

Toro Nagashi festivals are free to watch, although it’s best to arrive as early as possible – the riverbanks tend to get very crowded, and those wishing to release a lantern will need to wait in line, for as long as an hour. Your lantern will be lit for you once you reach the river.

You’ll also typically be treated to live music and traditional O-bon dancing at the festival. This Bon Odori dancing was originally choreographed to be performed in yukata (kimonos) – and it often still is. It’s a dance that is as mesmerising as the lanterns themselves, with movements and gestures that express wishes for a good harvest and good fortune. Since yukata are restrictive, the moves are easy to learn and master, making it a very accessible traditional performance. 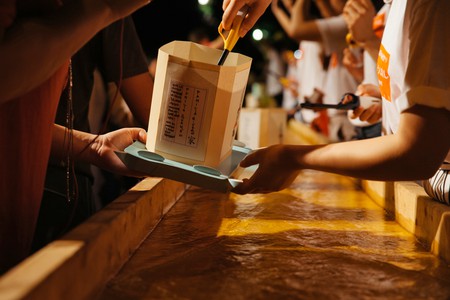 What other light festivals are there?

There are several other notable light festivals around the world. In October or November, Hindus, Sikhs and Jains across the world mark Diwali, which celebrates the victory of light over dark and of good over evil.

There’s also the Ghost Festival, celebrated in Taiwan and China, when lost spirits are thought to walk among us. On 15 September, lanterns are sent down the river to guide the spirits, and offerings of money and symbolic items made of joss paper are burned.

One of the most photographed light festivals is the Loy Krathong lantern festival celebrated in Thailand and other parts of Southeast Asia. Thousands of lanterns are lit and sent up into the sky over a spellbinding three-day period in November.

Finally, another Japanese light festival is the Spirit Boat Procession held in Nagasaki on 15 August each year. The festival traditionally mourns the dead who have passed away that year. 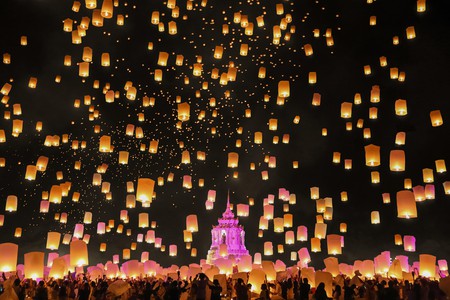