The Essential Guide To Watching Sumo In Japan 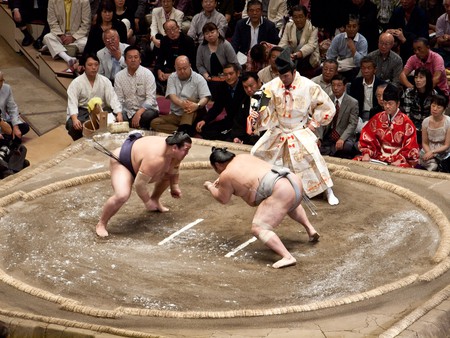 A sumo match is ready to begin | © Gusjer/Flickr

Sumo has been practiced as a display of brute strength for centuries. It is influenced by — and maybe even born from — a Shinto ritual in which combatants wrestle with kami, or shrine spirits. Sumo’s connection to Shinto is apparent in its traditions, costumes, and ornaments. The rules and rituals surrounding the sport are complex and go beyond the ring. Read on for the essential guide to this most popular of Japanese sports.

Sumo is full-contact, competitive wrestling. The wrestlers are called rikishi or sekitori depending on their rank, the latter being more prestigious. The aim of the game is to force your opponent out of a ring called the dohyō. A rikishi can also lose if he’s forced to touch the ground with anything other than the bottom of his feet. Like most professional sports, using an illegal move — in sumo known as kinjite — can also result in losing the match. In addition to professional sumo, which is practiced only in Japan, amateur sumo is a popular sport in Japan and abroad. 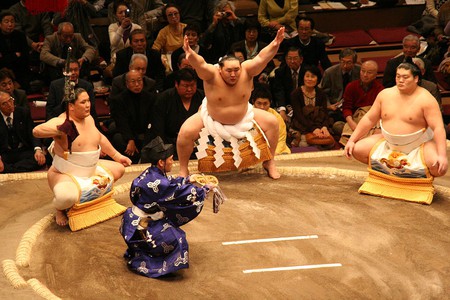 Another wrestler acts as tachimochi (sword bearer) during the yokozuna Asashōryū's ring entrance ceremony. Tachimochi is only for wrestlers who have achieved yokozuna rank | © Eckhard Pecher/WikiCommons

Rikishi and Sekitori (The Wrestlers)

The life of a professional sumo wrestler is very regimented. All wrestlers must live in a facility known as a training stable or heya. There, their meals, schedules, training, and even their clothing are all dictated by centuries of tradition. Each heya is run by an oyakata. These oyakata are former wrestlers and members of the Japan Sumo Association. They are the only ones allowed to train new wrestlers. 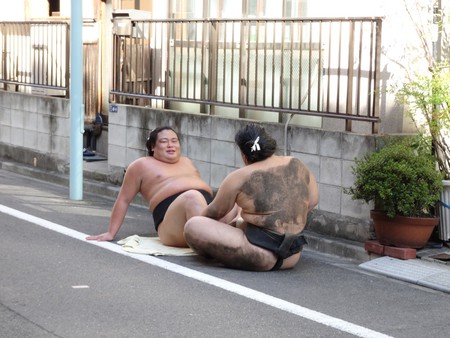 A sumo wrestler’s rank is very fluid. He is promoted or demoted depending on his performance in the six grand sumo tournaments held each year, known as honbasho. Other tournaments are also held, but they won’t affect a wrestler’s rank. Wrestler’s begin their careers in the lowest rank, jonokuchi. The highest of the six sumo divisions is makuuchi. There are also hierarchical ranks within each division. The coveted yokozuna title is the highest rank of the makuuchi division. More than one wrestler can hold the yokozuna title at any given time. 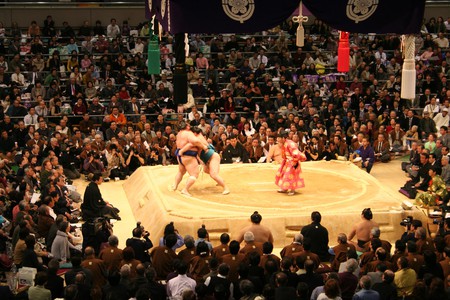 As a centuries-old sport, sumo is ruled by plenty of rituals and traditions. In order to start the match off on the right foot, many rituals must be followed. The wrestlers are called into the ring (dohyō) partitioned by rope, which is mounted on a square stage. They look into each other’s eyes, and then turn to their respective corners, located either south-east or south-west. Then they perform the shiko. They squat, clap their hands and raise their right leg high into the air for a loud stomp. The same is repeated for the left side. 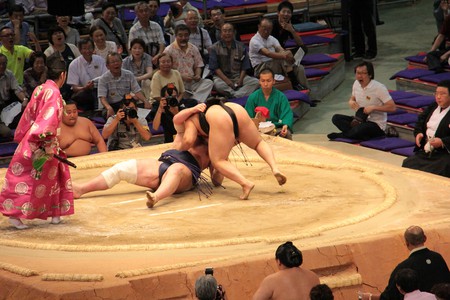 A winner is decided | © Cesar I. Martins/Flickr

The wrestlers get back into their corners and squat down in order to receive the chikara-mizu, or strength water. The water is used to rinse their mouths. This particular ritual is influenced by Shinto purification rituals. They return to the center of the dohyō and assume the sonkyo position. In this wide stance, they show their opponent that they are not carrying any concealed weapons, and that they wish to meet their opponent in a fair fight. The prize money put forth by sponsors is then advertised on large banners, which are carried around the ring.

Finally, purification salt is thrown by the wrestlers onto the dohyō. They assume their positions at the ‘starting lines’ known as shikiri-sen and perform another shiko. They then step back and take the shikiri position with fists on the ground. A match between juniors may start now, but for the higher divisions, wrestlers return to their corners, take a drink, wipe their bodies, and throw more salt, before finally returning to the center in the shikiri position. The higher the rank, the more elaborate these ring entrance ceremonies become. Yokozuna, for example, will have a sword bearer or tachimochi present for their entrance. The match begins when the time limit set for the ceremonies runs out, and the referee or gyoji informs the wrestlers it’s time to start.

A sumo match is ready to begin | © Gusjer/Flickr

The six grand sumo tournament (honbasho) schedules and official ticket sales are available on Oosuma. Information on the lesser sumo tour circuit is available on the official sumo website. The honbasho are held in grand sumo halls, like Ryogoku in Tokyo, or other large indoor stadiums, like the Osaka Prefectural Gymnasium. Tickets usually go on sale two months before the tournaments, which are held every other month starting in January.

Matches begin at 8AM and continue until 6PM, and the tournament lasts 15 days. One ticket will allow you to attend all the matches in a single day. Ticket holders can leave and re-enter just once, so use the break wisely. The main matches of the top sumo divisions usually begin around 2PM – that’s when the seats really start filling up.