Why Bloody Footprints Line the Ceilings of Kyoto's Genkoan Temple 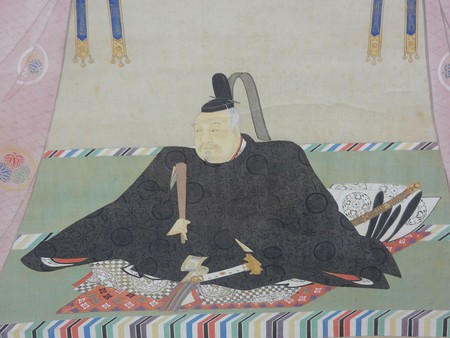 Ieyasu Tokugawa, whose forces clashed with enemy troops before they committed mass seppuku in Kyoto on August 1, 1600. | Wikimedia Commons/Mikkabie

Kyoto’s Genkoan Temple appears to be a lot like other such sites in Japan: a serene haven and spiritual oasis. But looks can be deceiving – this seemingly tranquil spot hides a dark secret from Japan’s feudal past.

Step in to the outer corridor at the temple and look up at the ceiling. There you will see a footprint, of what looks like blood. This is the lasting imprint from a little-known episode in Japanese history, in which hundreds of samurai committed mass suicide following a violent struggle. But how did the bloodstained footprint end up on holy ground?

To answer that, we have to go all the way back to the 16th century, when Japan was still at the mercy of feuding warlords. The wood used in the ceiling was originally from the floorboards at Fushimi Momoyama Castle, located at the southern end of Kyoto. It was there that 380 warriors committed seppuku (suicide ritual) on Aug 1, 1600. As they breathed their last breath amidst the cascading blood and gore, one samurai stepped in the plasma washing over the floorboards, leaving his footprint behind forever in grim posterity.

The seeds of this bloody affair were sown some two years previously, with the death of warlord Toyotomi Hideyoshi. It was Hideyoshi’s dying wish that his family remain in power following a brutal 16-year campaign, and he bound the most powerful families of the country in a five-man regency that pledged allegiance to his five-year-old son Hideyori. 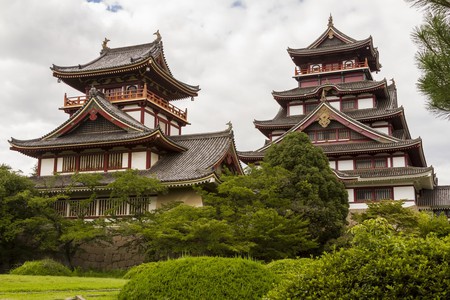 The truce was fragile at best. At its centre was a power struggle between two clans; one headed by Ishida Mitsunari, based at Osaka Castle, and the other by Tokugawa Ieyasu, the most powerful warlord in the country and eventual founder of the Tokugawa Shogunate – the last ever feudal Government in Japan. Ieyasu’s base was Fushimi Castle, better enabling him to influence the young Hideyori from his stronghold in the former Japanese capital.

Mitsunari distrusted his counterpart, convinced that he wanted absolute reign over Japan, and stirred rebellion among warlords in Japan’s Tohoku region, hoping to distract and weaken his former ally. The tactic worked in part – Ieyasu set out to quash the rebellion and left behind a 1,800-strong garrison at Fushimi Castle. Their orders were to hold the fort, no matter the cost. Seizing his chance, Mitsunari assembled an army of 40,000 on July 16 and headed for Fushimi Castle. Upon arrival, he demanded that the garrison, lead by Torii Mototada, abandon their posts. Mototada refused, despite being utterly outnumbered. A brutal siege began…

To Mototada’s credit, he and his men held their ground for two weeks while the fighting raged. Historical records differ on what happened next, but it is believed that a horde of ninja infiltrated the castle and started a fire in order to flush the remaining soldiers out. Mototada still refused to surrender, and rallied his troops. They retreated to the castle keep, where they would make their blood-drenched final stand.

Saiga Magoichi, leading Mitsunari’s riflemen, burst into the keep and found the embattled samurai. Reportedly, Mototada scolded Magoichi in front of his troops, daring him to take up his sword. Magoichi duly obliged, cleaving the man’s head clean off his shoulders. With their leader dead and their castle burning to the ground, the remaining warriors took the honourable next step and, in what must have been a horrifying spectacle, committed ritual disembowelment en masse. For them, death was better than capture.

Mitsuanari won the skirmish, but he was no match in the long term for Ieyasu’s military might and tactical cunning. On September 15, Ieyasu routed his adversary at Sekigahara in northern Kyoto. He then began the shogunate that bears his name before dying in 1616 from what historians believe was either cancer or syphilis. The castle keep at Fushimi survived the blaze and its floorboards, along with other parts of the fortress, were dismantled for use elsewhere.

Overseeing this operation was Kouchiin Suden, a confidant of Ieyasu and a zen priest. The floorboards from Fushimi spent 20 years in storage before they were eventually distributed to seven sites across Kyoto, including the one at Genkoan. The boards’ sacred nature meant they were not to be used as floorboards. Visitors to the city can also find another temple bearing the bloodied footprints at Shoden-ji Temple. They are now known as chitenjo or “blood ceilings’, a lasting reminder of the carnage that took place on that fateful day in August.