The British Guest House That Inspired a Japanese Anime 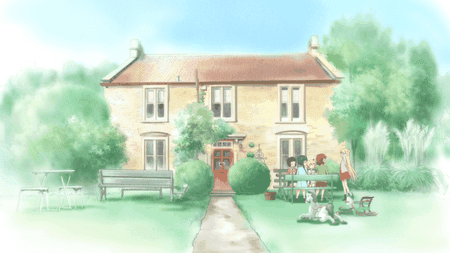 A humble British guesthouse has become the unlikely inspiration for a popular Japanese anime, and fans of the show are flocking to it in droves.

Fosse Farmhouse, located amid the stunning vistas of The Cotswolds, looks like the archetypal British bed and breakfast (B&B): a simple two-bedroom building complete with a well-kept garden that dates all the way back to the 1700s. Every year, it enjoys a steady stream of visitors, many of whom leaving glowing comments in its guestbook. What makes this particular place so special is that unlike other such businesses nearby, it has been immortalised in a Japanese anime. The show’s fans visit all year round eager for the chance to see the spot that inspired their beloved program.

Said show is Kiniro + Mosaic (more popularly known as Kinmoza), a charming slice-of-life tale about a Japanese student who travels to the UK to take part in a homestay, picking up friends and learning myriad life lessons along the way. The show, currently one of the highest-rated anime in Japan, includes scenes where protagonist Shinobu experiences a visit to a British guesthouse that bears an uncanny resemblance to its real-life counterpart. Even her ride in a vintage 1954 Morris Minor is a direct nod to the same car that sits outside Fosse Farmhouse.

The B&B is owned and run by Caron Cooper, who picked it up decades ago and renovated it before turning it into a successful business. Caron, whose CV includes stints as an international DJ and a vintage stall owner on Portobello Road, said: “Many years ago by chance I just happened to meet a Japanese couple in London, Mr and Mrs Mitani, who were creating a British country-style B&B in Japan. I was really curious to understand why Japanese guests would be interested in staying there, so I invited them to visit Fosse Farmhouse to experience the real thing in the Cotswolds. The Mitani’s loved their stay with me, and on their return to Japan introduced all their guests staying in their B&B to my business.”

This led in 1990 to a popular ladies magazine in Japan called LEE spotlighting her guesthouse in a feature, which in turn brought her to the attention of Japanese anglophiles. One of the people who spotted the feature was Kinmoza artist Yui Hara, and the title began life as a manga in 2012 before being picked up as an animated adaptation. Animators visited Fosse Farmhouse along with all the other locations referenced in the manga, including Kemble Station, Cirencester, Bibury and Bathampton. 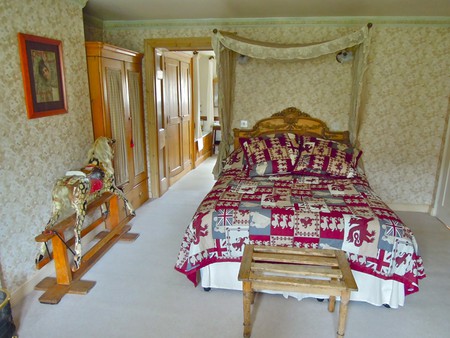 The Pine Room at Fosse Farmhouse, which in the Kinmoza anime is Shinobu's bedroom. | © Caron Cooper

So popular is the guesthouse with visitors from the Far East that its website includes a section in Japanese. And it has attracted people from all walks of life – after winning a competition in 1992, Caron was invited to the British Embassy in Tokyo, where she was to make an afternoon tea party for the Japanese Royal Family. She said: “While I was pouring the tea to his Imperial Highness Prince Mikasa and his family, I happened to mention that if they ever came to England I would like to invite them to stay at Fosse Farmhouse. On my return to the UK, I had a telephone call from the Imperial secretary requesting a visit in 1994. Prince Mikasa, his wife and daughter spent three nights in my B&B during July that year.”

In recent years, she has become the subject of a separate manga in Japan: “Yui Hara has written a manga story which is based on my life in Fosse Farmhouse. Each episode has me baking scones or driving my Morris Minor to the local farmers market in Cirencester.” And when Kinmoza got a feature-length adaptation in 2016, Caron was on the red carpet at the Tokyo premiere, signing autographs for fans.

She said: “I’m now quite used to the attention of Kinmoza fans in Japan, and the recent publicity here has meant that people in England now understand my story, too, which I’m really proud of.” 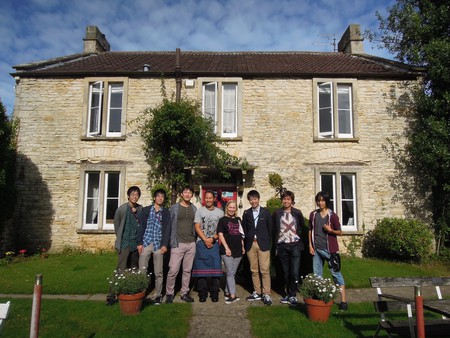