The Best Things to Do on the Midosuji Subway Line

Osaka | © Pedro Szekely/Flickr
There are many train lines crisscrossing Osaka, but the red Midosuji subway line is the lifeline for Osakans traveling across their city. The second oldest subway line in Japan, it runs north-south through the city and stops at over 30 stations. It’s almost impossible to properly tour Osaka without riding the Midosuji at least once. With a 600 yen holiday and weekend pass, take a day to ride along and explore some of Osaka’s best things to do at Midosuji stations for a fraction of the weekday prices.

Stop and smell the roses at Nagai Park and Botanical Gardens

Nagai Park is one of the biggest parks in Osaka city, but is rarely visited by tourists despite having so much to offer. Besides tennis courts, a pro-soccer stadium, and a swimming pool, there is a wonderful botanical garden and natural history museum. The botanical garden is truly a treasure in Osaka. There are over a 1,000 varieties of plants with many grouped into areas to recreate a time in natural history, such as forests planted to represent glacial forests. The summer time is especially beautiful when the roses and hydrangeas are in bloom. Don’t miss this wonderful park located right next to Nagai station. 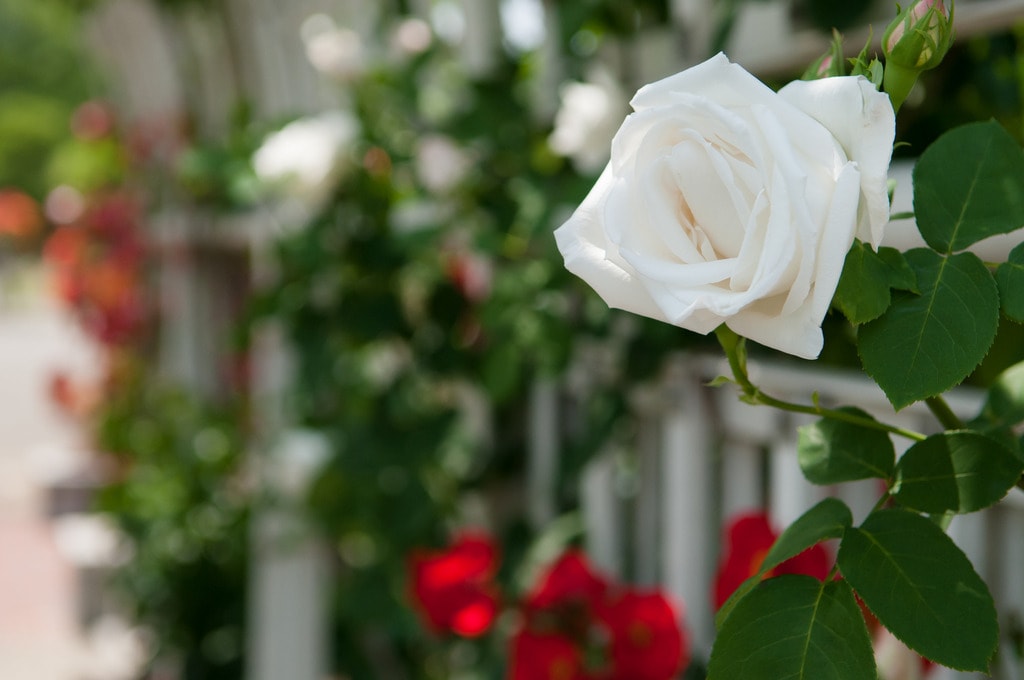 Get your fortune told at Katsuoji

This temple is not technically directly off the Midosuji line, but its worth the trek out to it. One of the main ways to access Osaka’s daruma temple is to take a bus from Senri Chuo station. Because of it’s a bit out of the way, many visitors do not take the time to visit and even during peak cherry blossom season the temple remains uncrowded. While this temple is known for a few different things, its biggest draw is the daruma omikuji. Omikuji are fortunes written on a slip of paper that can be purchased for a few hundred yen at most temples. At Katsuoji, the omikuji are slipped inside a small wooden daruma. If the fortune is good, take it home. If it’s bad, tie it up somewhere on the temple grounds to try to ward off any bad luck and try again. The temple grounds have thousands of the daruma dolls placed there by former owners. Darumas have no eyes and the owner draws in one and makes a wish or goal. When it comes true, the second eye is drawn in and the daruma is returned to the temple. Make sure to plan the return trip to Senri-Chuo carefully. Buses run infrequently even during peak season. 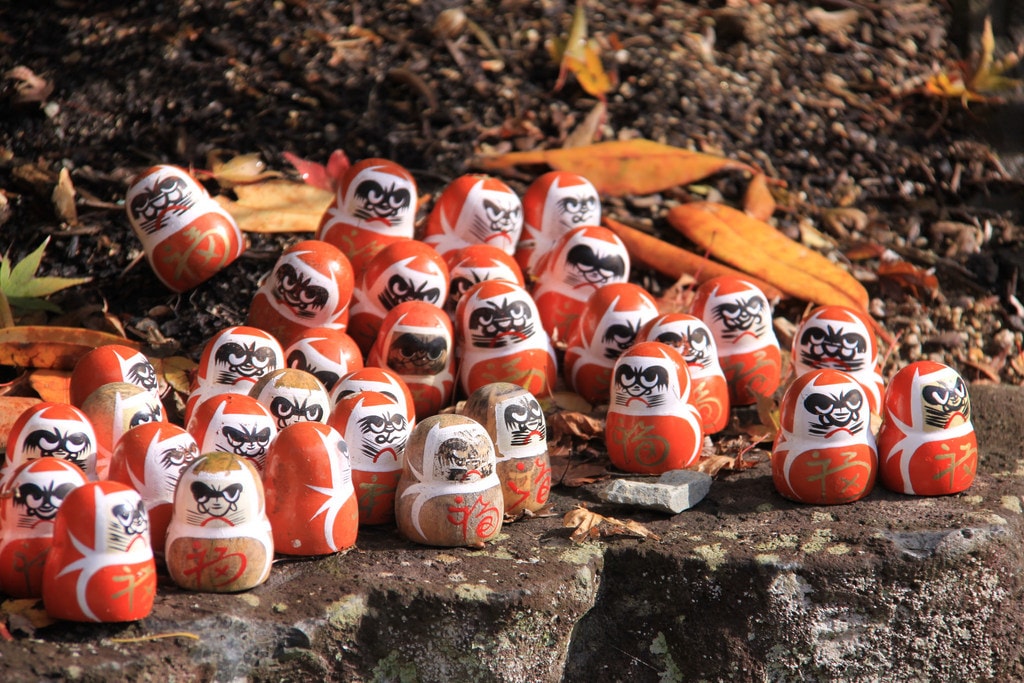 Eat your food on a stick at Shinsekai

While hardly unknown, it does seem that Shinsekai is often overlooked when planning trips to Osaka. One of the seediest areas of Japan, this place was built to resemble a city of the future, but war and economics left it to decay. Now it’s a colorful addition to Osaka’s already “dangerous” reputation and is filled with the most famous kushikatsu restaurants in the country and tiny alleyways with “snacks” (local female run bars) and private karaoke bars. Don’t miss Jan Jan Yokocho alley for a chance to time travel back to an older Japan. This shopping arcade is filled with tiny restaurants serving a variety of food, old school b.b. gun target ranges, and a few old buildings dedicated to letting old men play traditional Japanese board games like Shogi. 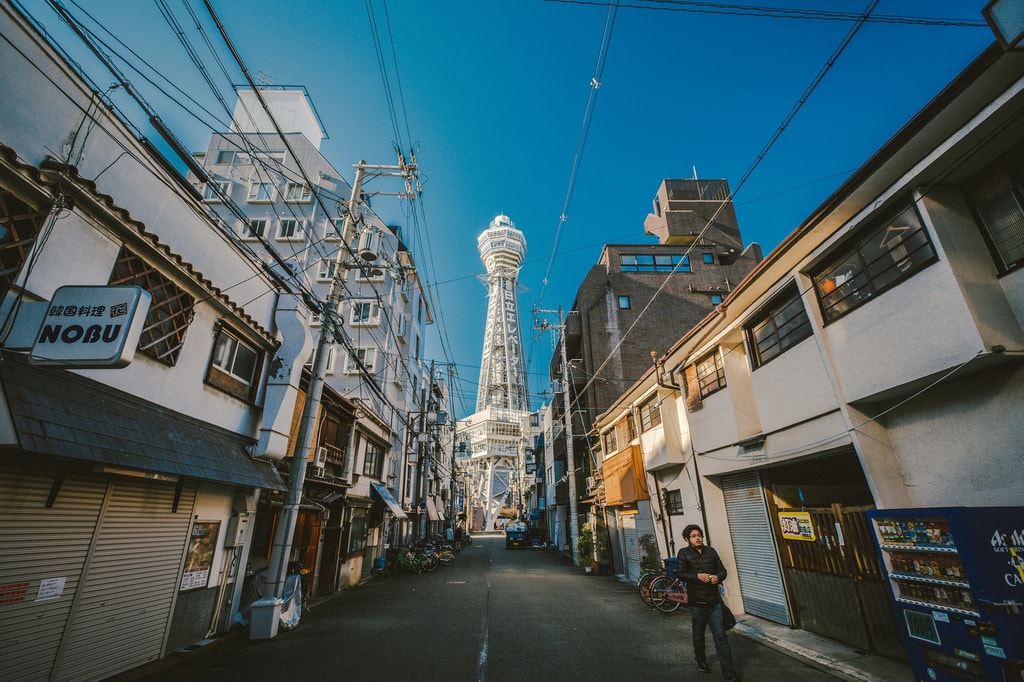 Hattori Ryokuchi Park is an enormous park at Ryokuchi-Koen station right outside of Osaka city limits. With about 300 acres of park to explore, this could easily be an all day excursion. It contains its own forests and multiple ponds as well a botanical garden with hundreds of different plants. Inside the park grounds is the Japan Open Air House Folk Museum dedicated to old Japanese styles of homes including a thatched roof a-frame from Shirakawago. This museum is 500 yen (US$4.50) to get in, but it’s worth it to explore authentic old style Japanese homes in this beautiful park. 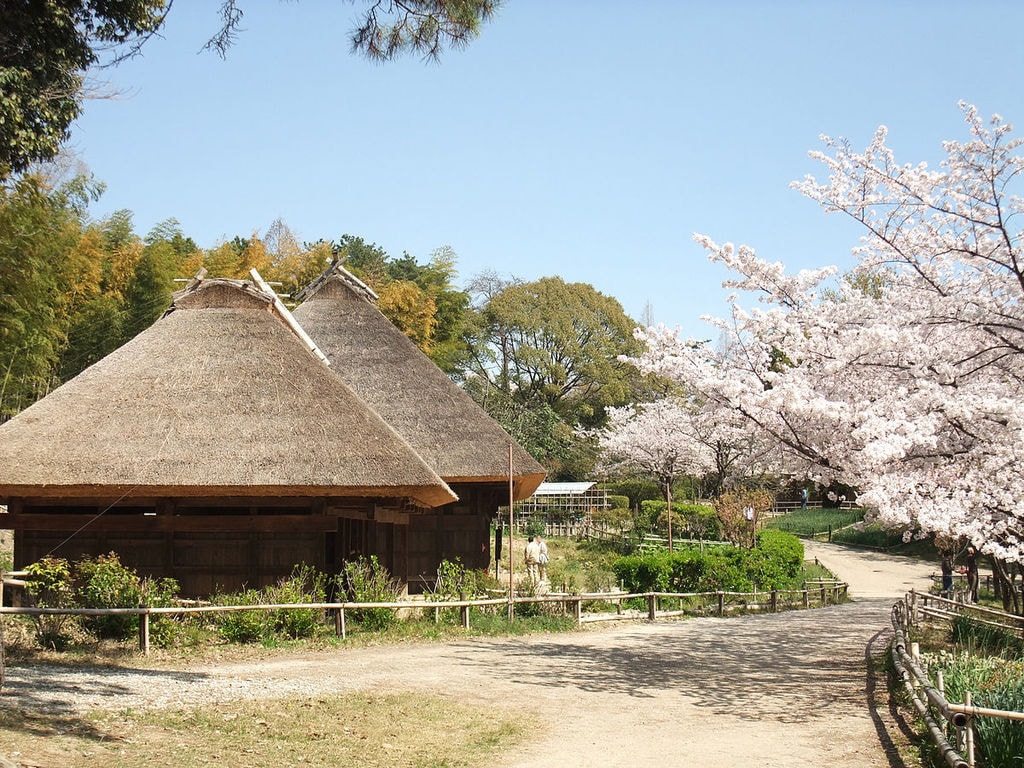 Be dazzled by the neon lights of Dotonbori

Dotonbori needs no introduction. Osaka’s most famous street is easily accessible from Midosuji’s Namba station. Grab an order of takoyaki from one of the many restaurants lining the road and sit by the river for a chance to watch some of Osaka’s biggest characters strut their stuff. Dotonbori Bridge is famous for the Glico Running Man, but it’s almost as well known as being a great spot to watch hosts in their incredible outfits chasing down potential customers to bring back to their bars. Watch out for all the best signage like the gigantic moving crab and the giant hand holding a piece of sushi at a popular kaitenzushi restaurant. No trip could be complete to Osaka without a tour around its cultural hub. 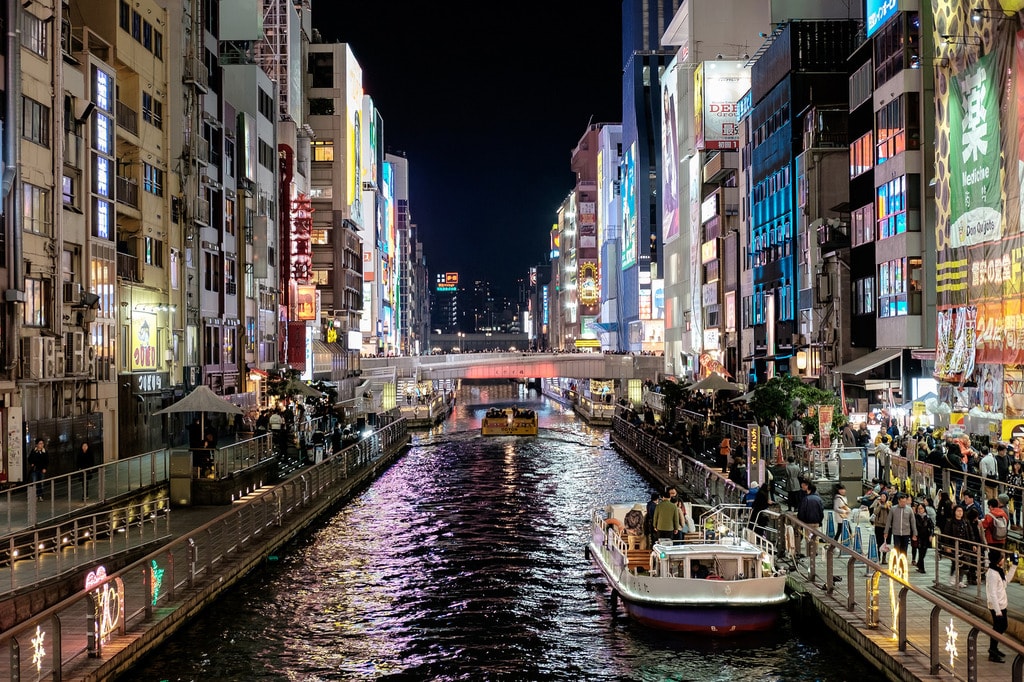 Building
Shibakawa Buidling | © Iskra Photo/Flickr
It’s rare to find architectural gems like the Shibakawa buildinganymore. This 1927 building was a modern wonder in the late 20s when most of Osaka was still traditional wooden buildings. While it’s been home to a few different businesses, the newest generation of businesses here are shops run by Japanese artisans. One of Japan’s most beautiful ceramic makers, Yumiko Iihoshi, is based in the Shibakawa building along with the ultra stylish Couer Femme haberdashery. In the basement floor is Mole coffee, a café known for making excellent coffee and acting as a gallery space for local artists.
More Info
Open In Google Maps
6 3, 3-chōme, Fushimimachi, Chūō-ku Osaka, Osaka, 541-0044, Japan
+81662312457
View menu
Visit website
Visit Facebook page
Send an Email
Give us feedback

Have a picnic at Nakanoshima Rose Garden

Every year during late summer, over 4,000 roses bloom in Nakanoshima Rose Park located next to Yodoyabashi station. Right in the middle of looming government buildings, Yodoyabashi seems an unlikely place to find one of Osaka’s best hang out spots. Nakanoshima Park is surrounded by the Dojima and Tosabori rivers and is one of the most popular places for picnics in the city. Do not miss grabbing a bento and claiming a spot under one of the huge shady trees amongst the roses when the weather is nice. In the mood for a nicer lunch? Go to Northshore to pick up some amazing sandwiches and salads to go and maybe grab a huge spiked lemonade to make the picnic a little more interesting. 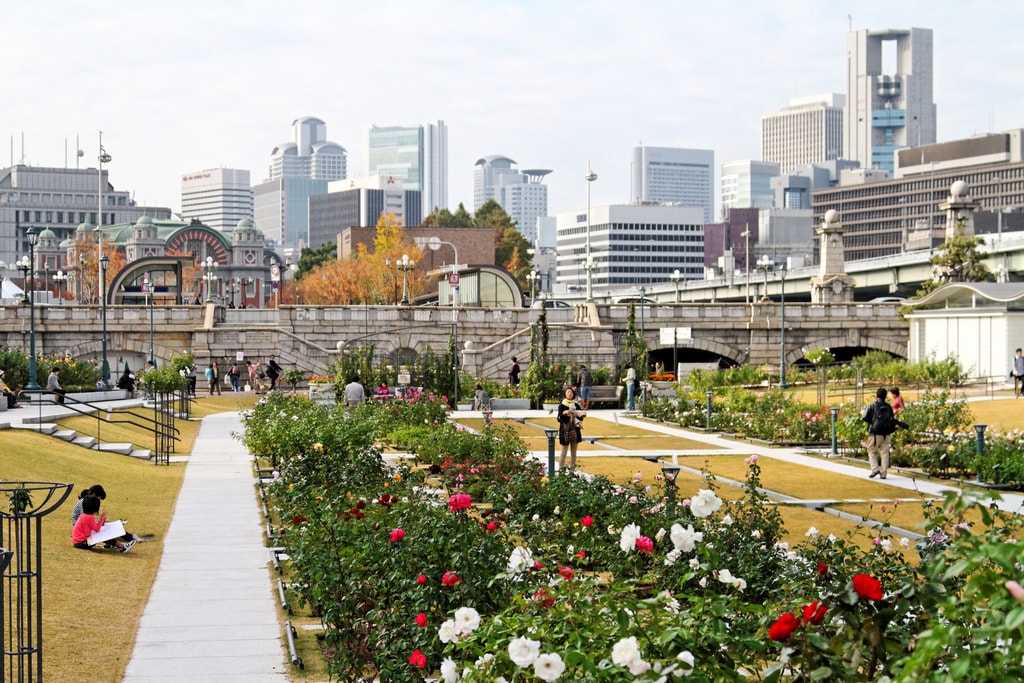 Shop till you drop in Umeda

While Namba is considered classic Osaka, Umeda has a charm all its own. While not as flashy, Umeda is Osaka’s attempt at polishing and refining itself to compete with the glitz and glam of Tokyo. Many of Kansai’s major train lines have upscale department stores located at Umeda station, like the Hankyu and Hanshin Department stores. These are the places to purchase 90,000 yen pyramid shaped watermelons and 200,000 yen lacquered vases. The Lucua building and Isetan department store are considered some of the best shopping in the city. Don’t leave Umeda without popping by Loft, Japan’s cutest multistory home-store filled with special Japanese made stationary, housewares, and beauty products. 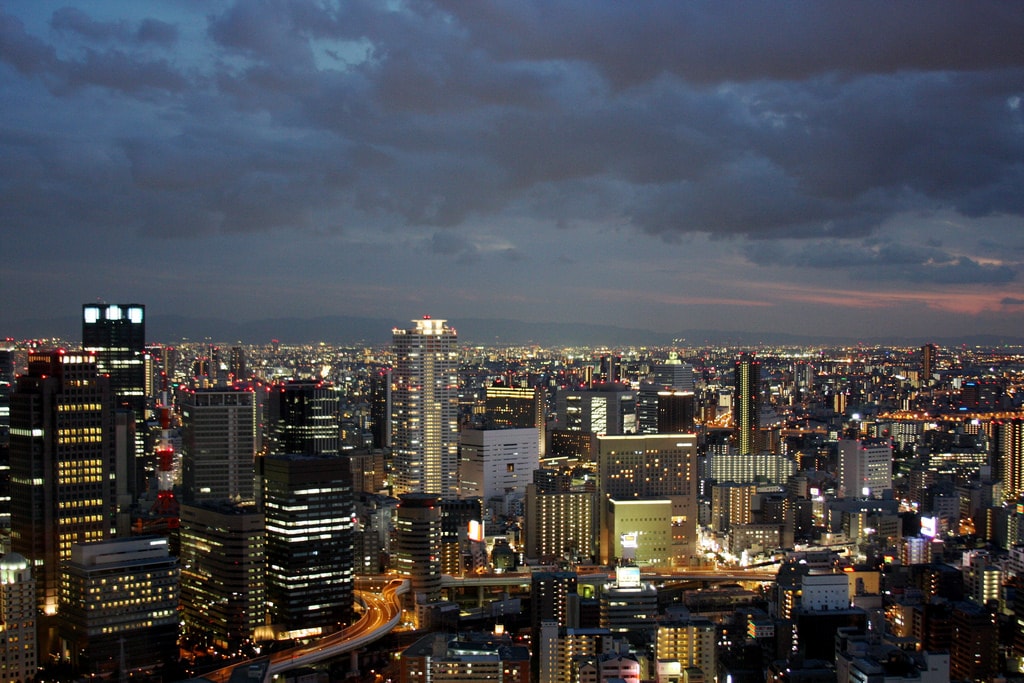