The Best Things to Do in Sapporo, Japan 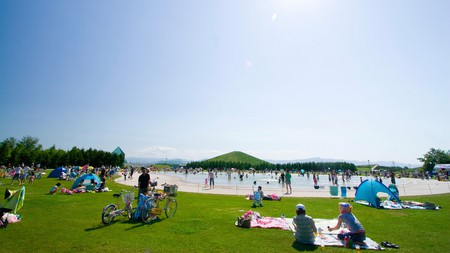 Located on Hokkaido, Japan’s northernmost island, Sapporo is known as the country’s winter wonderland. But this vibrant city – the fifth largest in the country – commands so much more than just a stopover en route to the ski fields. Here are 10 great things to do in the city of Sapporo.

Only a handful of people lived in Sapporo before the 1860s, when it was declared the capital of Hokkaido. In 1972, it hosted the Winter Olympics, and a long list of cultural events has followed in the Games’ wake over the past half-century.

Since its Olympics heyday, the city’s become a popular launchpad from which to explore the rest of Hokkaido. An hour’s bus ride west from Sapporo, between the cliffs of the Toyohira River, lies Jozankei Onsen, which houses 56 hot springs brimming with mineral-rich waters. Farther south, the Shikotsu-Tōya National Park is a rugged landscape of lakes, craters and active volcanoes, and on the coast, Noboribetsu is Japan’s most famous hot spring resort, oozing 11 different types of thermal water.

But it would be a mistake to ignore Sapporo altogether. Today, this thriving metropolis is a mosaic of historic architecture, leafy parks, ocean-fresh seafood markets and toast-worthy breweries – these are the 10 best things to see and do in the city. 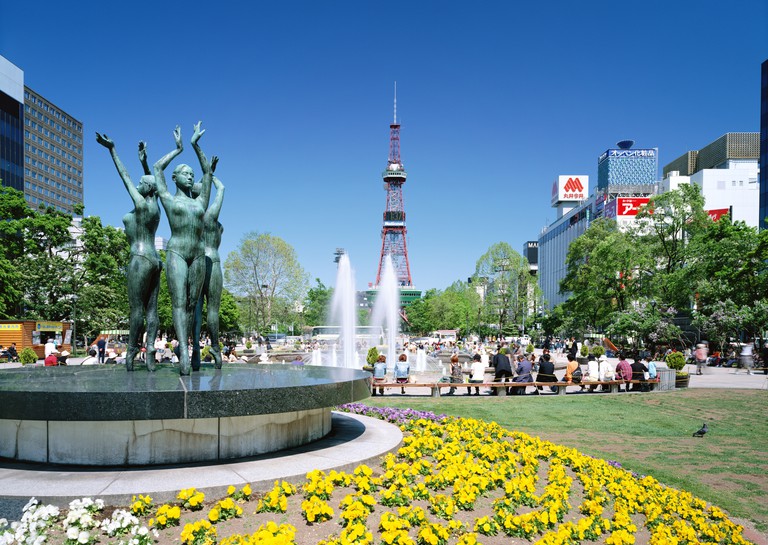 This wide, green boulevard slices through 12 city blocks, adding lawns, flower gardens, benches and sculptures to the centre of Sapporo. The Sapporo TV Tower looms over the eastern end of Odori Park, like a red-and-green version of Paris’s Eiffel Tower, with a huge digital clock reading the time. An observation deck sits 90 metres (295 feet) up, supplying spectacular views of the ice sculptures and crowds that roll in during the Sapporo Snow Festival each winter. A few blocks north, the JR Tower above the city’s railway station is another must-visit landmark – the T38 Observation Deck on the 38th floor of Sapporo’s tallest structure shows off equally enviable vistas.

Step back in time at the Sapporo Clock Tower 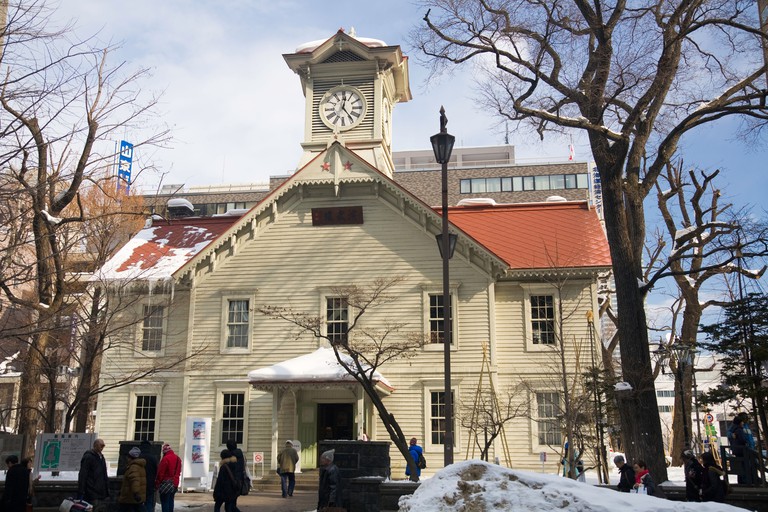 Sapporo Tokeidai is one of the city’s few surviving Western-style buildings. Built in 1878, the wooden clock tower looks straight out of an American colonial-era town. The Sapporo Clock Tower still chimes daily and walks visitors through its history in a small museum. The former Hokkaidō Government Office is another nearby landmark, dating back to 1888; its flower gardens and 2.5 million red bricks continue to attract admirers long after its role as an administrative centre. For a taste of Japanese architecture, head to the Hokkaidō Shrine next to Maruyama Park; its impressive gardens swell in sakura season and during the Hokkaidō Shrine Festival, which takes place each June. 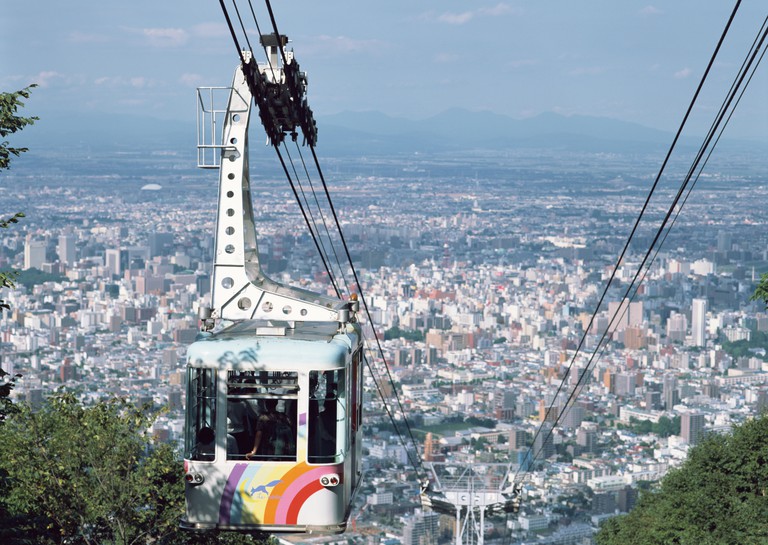 Sapporo is surrounded by a collection of forested hills, and the best and most accessible spot to admire them is from the top of Mount Moiwa (or Moiwa-yama in Japanese). A ropeway takes visitors three-quarters of the way up to the 531m-high (1,742ft-high) summit, while a small cable car covers the last stretch. The peak features an observation deck, restaurant, planetarium and even a small ski resort on its southeastern slope during winter. The panoramas are especially impressive when the city lights twinkle after sunset. 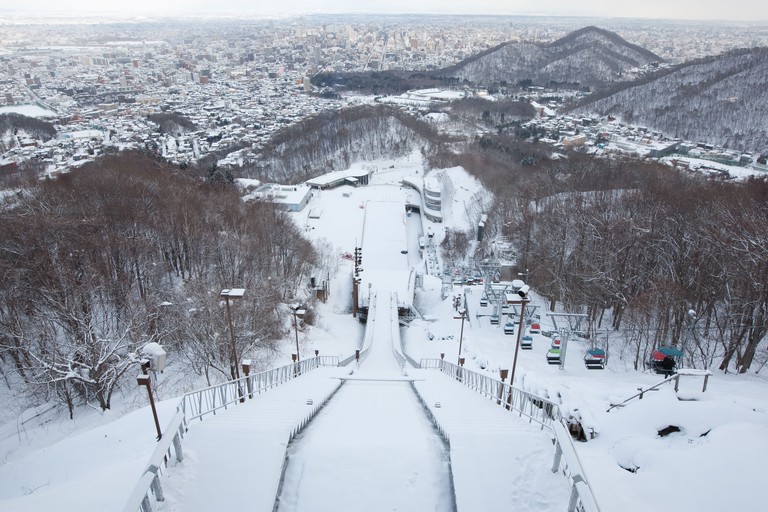 More jaw-dropping views are found at the top of this 133m-high (436ft-high) ski jump on the city’s western fringe, which Sapporo used during the Olympics. A chairlift scales that peak at the top of Mount Okura. At the bottom, the Ōkurayama Crystal House sells souvenirs, and the Sapporo Olympic Museum simulates speed skating and ski jumps. Sports lovers should also check out the Sapporo Dome farther south. The 2002 FIFA World Cup venue is now home to the home-grown baseball team, Hokkaido Nippon-Ham Fighters. The nearby Maruyama Park’s cherry trees and maple leaves come alive during spring and autumn, respectively.

Raise a glass at the Sapporo Beer Museum 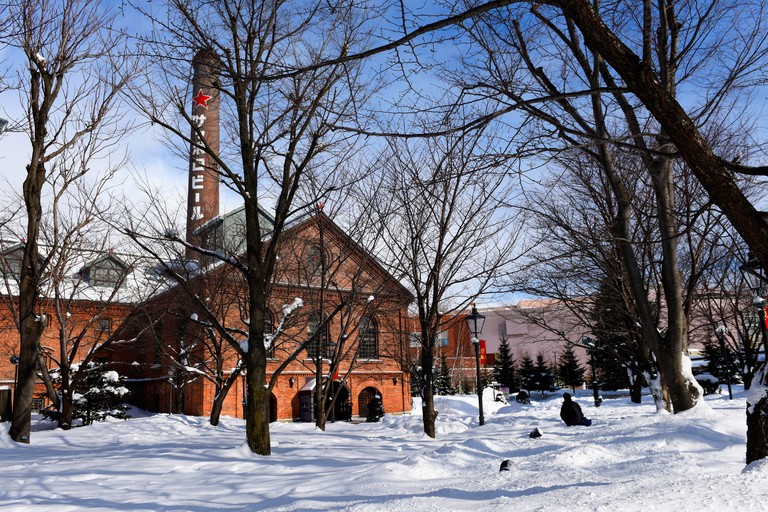 The word Sapporo is synonymous with beer. The city’s eponymous brewery is the oldest in Japan, founded in 1876, and is still churning out its famous silver cans today. Its original brewery is home to the Sapporo Beer Museum, where you can learn about the history of beer in Japan. This ivy-covered red-brick building is neighboured by several beer halls and restaurants – try the jingisukan (all-you-can-eat lamb named after Genghis Khan) and wash it down with a glass of the Sapporo Classic, only found on Hokkaido. Those with a sweet tooth shouldn’t miss Shiroi Koibito Park either, run by chocolate maker Ishiya. This real-life Willie Wonka factory offers a glimpse inside the production of Hokkaido’s beloved Shiroi Koibito cookie – a layer of white chocolate wedged between two wafers. 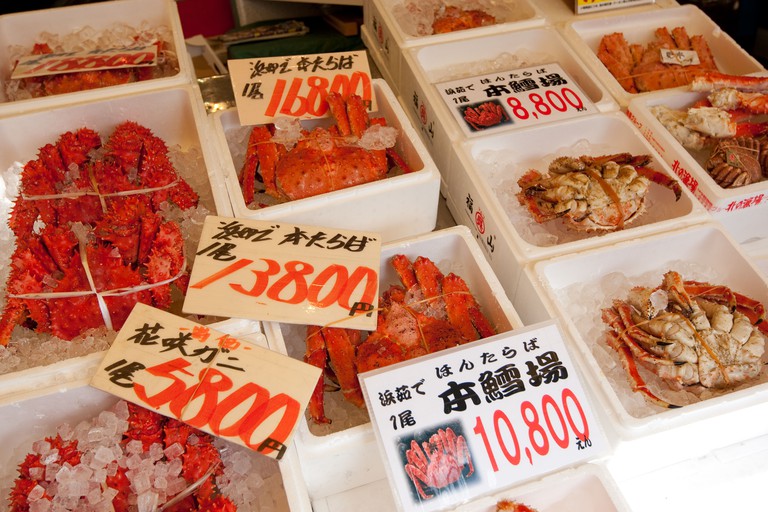 Besides chocolate and beer, Sapporo’s other great culinary passion is seafood. The Sapporo Central Wholesale Market covers several city blocks with stalls selling sea urchins, salmon roe, squid, scallops and kegani (hairy crab), a local speciality. On the other side of Odori Park, Nijo Market (or Nijō Ichiba) dishes up even more ocean-fresh fruits of the sea. Arrive early in the morning to grab the catch of the day for breakfast, or visit a nearby eatery for donburi (seafood over rice). 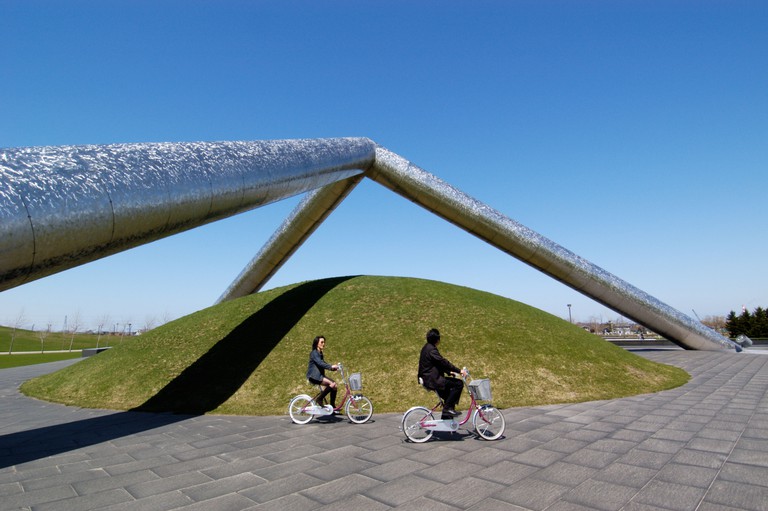 Before he died in 1988, American-Japanese artist Isamu Noguchi drew up plans to convert an old waste-treatment plant on Sapporo’s northeastern outskirts into one of the city’s best parks. In 2005, his vision became a reality. As well as a 3,000-strong forest of cherry trees, Moerenuma Park is dotted with sculptures, such as the five-storey glass pyramid Hidamari, the steel triangle Tetra Mound and plenty of Noguchi’s art. Mount Moere and the smaller Play Mountain loom over the lawns, while the Sea Fountain shoots its jets 25m (82ft) into the air during the warmer months when a man-made swimming hole is also open.

Rug up at the Sapporo Snow Festival 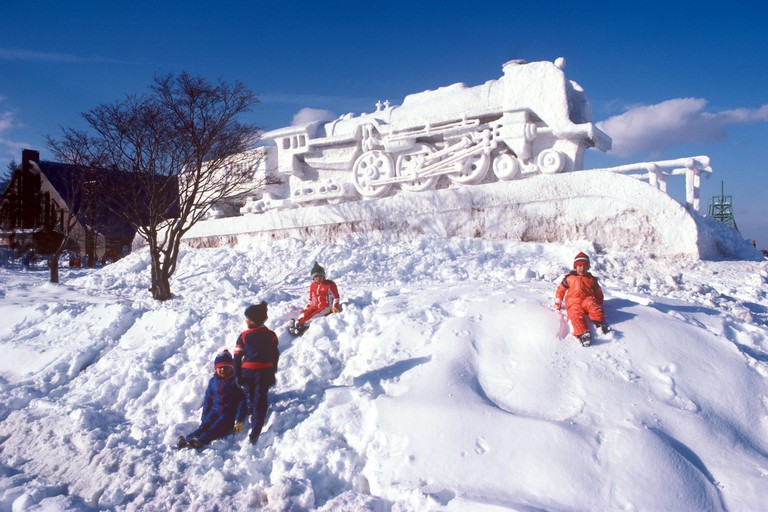 Nothing draws visitors to Sapporo like the annual Snow Festival. More than 2 million people – equal to the city’s entire population – flock here for one week each February. The festivities, which include fishing, skiing and snow sliding, stretch from Odori Park and nearby nightlife precinct Susukino to the Tsudome. But the centrepiece is Odori Park, which plays host to a series of mammoth ice sculptures – some as tall as 15m (49ft). The best time to enjoy these frozen statues is in the evening when they are lit up in multicoloured hues.

Ski on the outskirts of the city 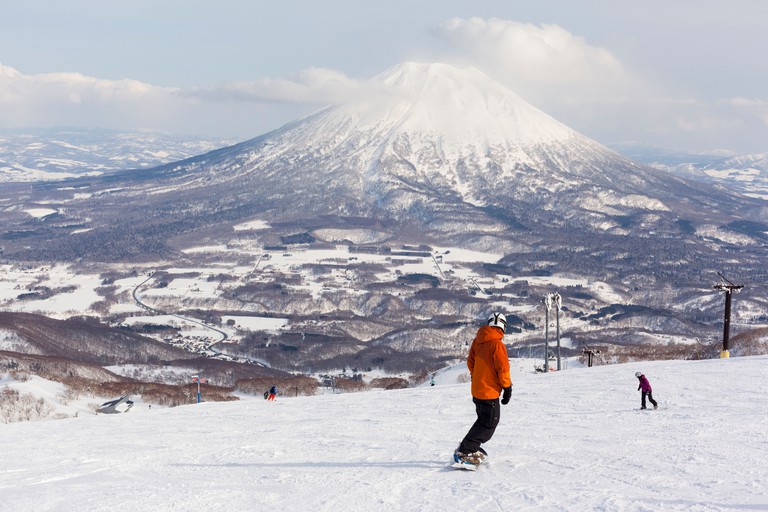 Japan’s premier ski resort Niseko is only a two-hour drive southwest of Sapporo, but a series of smaller skiing spots surround the city itself. Sapporo Teine, in the northwest, is the biggest, housing two runs that were used during the 1972 Games as well as the Olympic torch. The Highland Zone features advanced courses with rails and jumps, while the Olympia Zone caters to families and beginners. Then a little farther from downtown, Sapporo Kokusai receives massive amounts of snow on its seven courses; there’s only one black run but plenty of off-piste adventures in the deep powder. 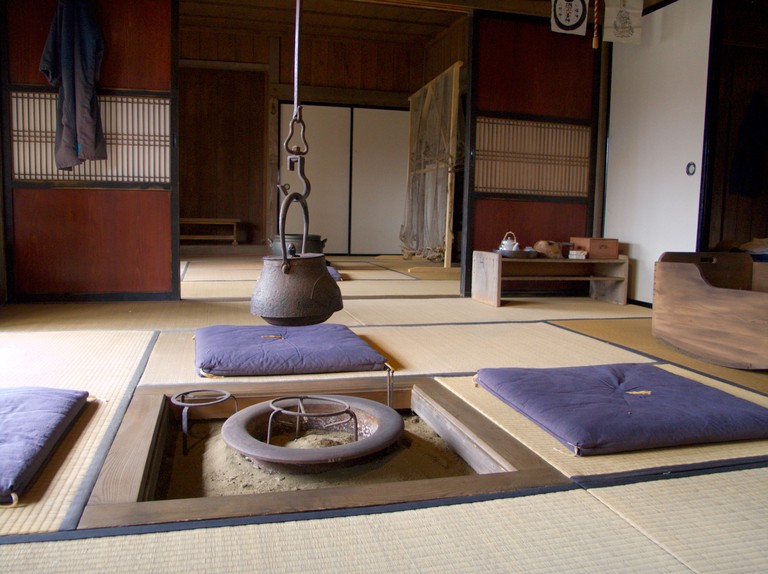 Hokkaido’s biggest city is naturally a perfect launchpad to explore the rest of the island, and there’s more than just snowy Niseko in the shadow of Mount Yōtei. Also within a day-trip distance of Sapporo is Otaru, a picturesque harbour city that’s only 30 minutes away by train. The city is home to the Historic Village of Hokkaido, an open-air museum that recreates life in the 1800s when this region first made its fortune.